In the few areas of the western United States where viewers cannot receive Fox network programs over-the-air, KTTV is available on satellite via DirecTV.

KTTV began operations on January 1, 1949, and was operated initially by KTTV, Incorporated, jointly owned by the Times-Mirror Company, publishers of the Los Angeles Times (51 percent), and CBS (49 percent). As such, KTTV was the original Los Angeles affiliate of the CBS television network. During their partnership, the Times turned down at least two offers CBS made to purchase KTTV outright. The joint partnership lasted exactly two years, until January 1, 1951, when CBS sold its stake in channel 11 back to Times-Mirror. CBS then moved its programming to newly-acquired KTSL (channel 2, later KNXT and now KCBS-TV). From that point, KTTV carried many of the programs from the DuMont Television Network for the next three years.

In 1954 DuMont moved its affiliation to KHJ-TV (channel 9, now KCAL-TV), and KTTV became an independent television station. During the late 1950s, the station was briefly affiliated with the NTA Film Network.[1] In 1958, channel 11 became the television home of the Los Angeles Dodgers baseball team (which had relocated from Brooklyn, New York to Los Angeles that year), and the relationship between KTTV and the Dodgers would last until 1992.

The Times-Mirror Company sold the station to Metromedia in 1963. For many years, KTTV televised the Tournament of Roses Parade, competing with rival KTLA and others, until 1995.

By the 1970s KTTV offered the traditional independent schedule, consisting of children's programs, off-network reruns, sports programming, and movies, along with a 10:00 p.m. newscast. The station, along with KTLA, KCOP, and KHJ-TV were seen on various cable television outlets in the southwestern United States during the 1970s and into the 1980s, most notably in El Paso, Texas.

Australian newspaper publisher Rupert Murdoch and his company, the News Corporation (the controlling owners of the 20th Century Fox film studio), purchased KTTV and the other Metromedia television stations in 1986, and those stations formed the basis for the new Fox television network.

It also added more first-run syndicated shows such as talk shows, court shows, and reality shows. For a while it continued with afternoon cartoons from the network, known as Fox Kids, as well as top rated off-network sitcoms in the evenings.

In Fall 2001, channel 11 dropped the weekday version of Fox Kids and moved it to its longtime rival and new sister station, KCOP (channel 13). The Fox Kids weekday block was ended altogether in January 2002. With the lineup left to air Saturday mornings under the name change to Fox Box, then 4Kids TV, KTTV brought Fox children's programming back to the lineup. After the dissolution of 4Kids in January 2009, the station now carries the network's Weekend Marketplace infomercial block and airs the bare minimum of E/I content required by Federal Communications Commission (FCC) regulations.

KTTV also runs reruns of another sitcom, I Love Lucy, which had premiered months after the station lost its CBS affiliation. Reruns of the sitcom, which was filmed in Hollywood, are still popular among Southern California viewers and have continued to air in the L.A. area endlessly since the series ceased production in 1957, thus making KTTV only the second station in Los Angeles (KCBS-TV was the other) to continue airing the sitcom after it ended almost 50 years ago. The station no longer airs "I Love Lucy" Monday-Friday (instead airing in a two-hour block on KCOP), but KTTV does air the landmark sitcom on weekend afternoons, usually between 4 and 6 p.m.

In 1996, the station's longtime home on Sunset Boulevard in Hollywood, known as "Metromedia Square" (and later renamed the "Fox Television Center") was vacated. KTTV relocated to new studios a few miles away on South Bundy Drive in West Los Angeles, near the Fox network headquarters (the network's headquarters are on the lot of 20th Century Fox studios). The historic television studio at Metromedia Square, once home to Norman Lear's Tandem Productions and TAT Communications Company, also produced hit programs such as The Jeffersons, Mama's Family, Diff'rent Strokes, One Day at a Time, Hello, Larry, Soul Train, Mary Hartman, Mary Hartman, Small Wonder and the groundbreaking sketch comedy In Living Color. Many of those programs, either in first-run or off-network syndication, aired on KTTV. It was demolished in 2003 to make way for a new high school being built by the Los Angeles Unified School District.

KTTV shut down its analog signal, over VHF channel 11, on June 12, 2009,[2][3] as part of the DTV transition in the United States. The station had been broadcasting its pre-transition digital signal over UHF channel 65, but returned to channel 11 for its post-transition operations.[4] KTTV broadcasts in 720p high definition on channel 11.1, since Fox Network programming is broadcast in that particular HD format.

KTTV broadcasts a total of 46½ hours of local news a week (8½ hours on weekdays and two hours on Saturdays and Sundays). However as is standard with Fox stations that carry early evening weekend newscasts, KTTV's Saturday and Sunday 5 p.m. newscasts are subject to preemption due to sports coverage. KTTV operates a Eurocopter A-Star 350 B-1, titled "SkyFox HD" to cover breaking news. KTTV previously operated two helicopters; one of them (known as "Sky Fox 2") was lost in 2000 after crashing at Van Nuys Airport. It had previously been operated by KTLA. KTTV's 10 p.m. newscasts have been top-rated in that time period for much of the 2000s. However, in the past year, CBS-owned independent KCAL has been #1 since the end of 2010. 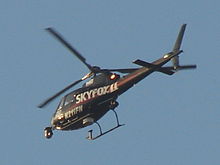 For a time during the mid-1980s, KTTV aired an 8 p.m. newscast, and moved its 10 O'Clock News to 11:00 p.m. in order to compete with KABC-TV, KNBC-TV, and KCBS-TV. The format initially was unchanged, but the 8 O'Clock News was dropped and the 11 p.m. newscast was reverted to its 10 p.m. slot shortly after Fox took over. KTTV dropped the morning cartoons for a new morning news show called Good Day L.A., which premiered in 1993. Though Good Day L.A. was created in response to KTLA's Morning News (which premiered two years earlier), it was inspired by sister station WNYW's Good Day New York, which was launched in 1988.

On April 17, 2006, KTTV launched a new look for its newscasts, including new theme music and graphics, as well as a new station logo. Similar in style to the Fox News Channel, this look has been standardized by other Fox owned-and-operated stations. The station also launched a new website based on Fox Television Stations' new MyFox interface on May 16, 2006; this format became standardized on all Fox-owned station sites by the end of 2006.

On July 14, 2008, KTTV launched a 10 a.m. newscast (its first midday newscast since the mid-1980s), following Good Day L.A. The 30-minute program is co-anchored by morning anchors Tony McEwing and Jean Martirez, with Lisa Breckenridge as a features reporter. KTTV is currently the only station in Los Angeles to have a 10 a.m. newscast. On December 8, 2008, the station also added a noon newscast, also anchored by McEwing, Martirez, Breckenridge, and Maria Quiban.

KTTV and KCOP began producing news in high definition on October 15, 2008, becoming the last network television stations in the region to do so. On December 1, 2008, KCOP reduced its one-hour 11 p.m. newscast to 30 minutes and retitled its program Fox News at 11, marking the end of a KCOP-named newscast. The newscast on channel 13 then became anchored by KTTV's Carlos Amezcua and Christine Devine, as it was considered an extension of KTTV's 10 p.m. newscast.

In 2009, Lauren Sanchez left to become a reporter for the nationally-syndicated entertainment news program Extra, and Maria Quiban was reassigned to weather anchor for the KTTV morning newscasts. On April 23, 2009, Rick Garcia left the station to join KCAL-TV, Channel 9 newscasts at 8:00 and 10:00 p.m., pairing with Pat Harvey. On April 27, 2009, KTTV introduced Good Day L.A. Today, a recap program featuring the best of that day's Good Day LA program, airing weekdays at 12:30 p.m.;[7] that show has now been replaced with TMZ on TV.

On April 12, 2010, the station added a 4:30 a.m. newscast, anchored by Jean Martirez and Rick Dickert, bringing it to seven and a half total hours of local news every weekday. KTTV was one of only two remaining Fox owned-and-operated stations (the other being WFLD in Chicago) without a weeknight early evening newscast; this changed on September 12, 2011 as KTTV launched an hour-long 5 p.m. newscast called Studio 11 L.A.[8][9]

On July 26, 2007, KTTV Fox 11 News aired a report on Anonymous, calling them a group of "hackers on steroids", "domestic terrorists", and collectively an "Internet hate machine". The report, which became the source for numerous internet memes, featured an unnamed former "hacker" who had fallen out with Anonymous and explained his view of the Anonymous culture. In addition, the report also mentioned "raids" on Habbo, a "national campaign to spoil the new Harry Potter book ending", and threats to "bomb sports stadiums".[10]

KTTV is rebroadcast on the following translator stations: