Munhwa Broadcasting Corporation (MBC (Hangul : 문화방송주식회사, Munhwa Bangsong Jushikoesa) is one of four major national South Korean television and radio networks. Munhwa is the Korean word for "culture". Its flagship terrestrial television station is channel 11 on VHF in Seoul. Twice government-owned, the network is owned by the Foundation of Broadcast Culture (which owns 70% of the company's stock), while the Jung-Su Scholarship Foundation owns 30%. MBC receives no government subsidy, and derives its income almost entirely from commercial advertising. It has 19 regional stations, and 10 subsidiaries. The network evolved from Busan Munhwa Broadcasting Corporation, the first private broadcasting corporation in the country. As of 2011, MBC has over 4,000 employees. It has provided terrestrial digital TV service in the ATSC format since 2001, and T-DMB (Digital Multimedia Broadcasting) service since 2005. 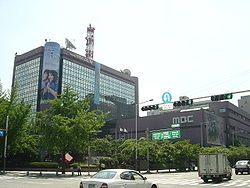 MBC began as Busan Munhwa Bangsong (Busan Munhwa Broadcasting Corporation, or Busan MBC), and was established in 1959 in Busan, South Korea. The radio station was then owned by Jeong Hwan-ok (a radio-store operator) and Kim Sang-yong (a former department-store owner). Jeong had suggested that Kim open a private broadcasting station; Kim was looking for a new business opportunity, and at that time Japanese stations dominated the south coastal Korean radio dial. On April 15, 1959 the postal ministry authorized Busan MBC to operate, making it Korea's first private commercial broadcaster. Busan MBC began its service with a 1 kW AM station, and became known for broadcasting the first CM Song in South Korea.

The company, however, faced financial problems: production costs for a local radio station were higher than expected, and advertising did not generate sufficient revenue. The network also faced a management crisis. In September 1959 Busan MBC was sold to Kim Ji-tae, who owned the Busan Daily. Its management was revamped, and the network saved from bankruptcy. After the network was rejuvenated, Kim decided to launch a private radio station in Seoul. That year, the postal ministry had approved four private stations. Kim purchased the right to operate a radio station in Seoul and launched a network in 1961, with a small AM station (as of 2011, the chief stockholder of Busan MBC is MBC in Seoul); MBC became the first private broadcasting network in South Korea.

However, the network faced a challenge when Kim was accused by Park Chung-hee (South Korea's then-President) of corruption. Kim was under pressure, and surrendered both Busan MBC and Busan Ilbo to the May 16 Scholarship Foundation in May 1962. Although the network is now managed by the Foundation, MBC has maintained its role as a private broadcaster. It began television broadcasting on August 8, 1969 and FM radio broadcasts in 1971. Under the Chun Doo-hwan regime, South Korea's media policy had changed. The regime had closed several radio and TV networks and MBC was forced to give most of its shares to the government, losing its position as a private broadcaster. On November 14, 1980, 70% of the network's stock was given to the Korean Broadcasting System (KBS).[1]

Partly to address concerns following the country's 1987 democratic reforms, the National Assembly established the Foundation for Broadcast Culture on December 26, 1988 to insulate MBC from political influence and KBS. Now, the network is owned by the Foundation of Broadcast Culture (which owns 70% of the company's stock), while the Jung-Su Scholarship Foundation(former May 16 Scholarship Foundation) owns 30%. MBC has had a jingle since 1969: Korean: "MBC...문화방송", "MBC...Munhwa Bangsong" in romanization and "MBC...Munhwa Broadcasting" in English; it was also used in 1994 for the silver anniversary of MBC-TV.

In 2001, MBC launched satellite and cable television broadcasting. As part of this expansion it created MBC America, a subsidiary based in Los Angeles, California, USA, to distribute its programming throughout the Americas. On August 1, 2008 MBC America launched MBC-D, a television network carried on the digital subchannels of KSCI-TV, KTSF-TV, and WMBC-TV. The service was planned to be launched in Atlanta, Chicago, and Washington, D.C. by the end of the year.[2][3] In northeast metro Atlanta, it aired on WKTB-LD channel 47.3, but as of 2011 is on WSKC-CA channel 22.1.

On October 21, 2011, the heads of MBC and Google signed an agreement of partnership. MBC will release 10,000 hours of content produced before 2005.The files will be divided into 10-minute clips with advertisement in between. MBC is also interested in holding a K-pop concert at the head office of Google to celebrate the partnership. The concert will be broadcast live worldwide through YouTube.[4]

MBC dramas have been part of the "Korean wave".[citation needed] MBC dramas are exported to 30 countries in Asia, the Middle East, Africa and the Americas. Dae Jang Geum has high audience ratings in China, Taiwan and Hong Kong; its popularity has continued in 50 countries, including Japan. Other dramas that have enjoyed high viewership include Jumong, The 1st Shop of Coffee Prince, Yi San and the recent drama, Queen Seondeok.

MBC’s reality program Infinite Challenge has enjoyed high ratings for three consecutive years. The comedians hosting Exclamation! (which ended its run in 2007) have promoted reading, reuniting foreign workers in South Korea with their families and providing medical help to the elderly.

MBC documentaries encompass a wide range of issues, from foreign affairs to the environment. PD Notebook premiered in 1990, and has since earned notoriety for its investigations from a journalistic standpoint. Episodes have included one covering scientific fraud by Korean geneticist Hwang Woo-Suk, and another containing arguments against importing US beef.[5] The latter episode, entitled "Is American Beef Really Safe from Mad Cow Disease?", contributed to three months of protest in Seoul against importing US beef. Since then, the accuracy of the episode and the program's method of obtaining information has been questioned.[6][7][8] MBC current-affairs and documentary programs have won recognition from the New York and Banff TV Festivals, the Asian TV Awards, ABU Prizes, Earth Vision and the Japan Wildlife Festival.

iMBC is MBC's website, providing users with information on current and past programs and allowing users to download or stream programs to watch. Established in March 2000 as the internet subsidiary of MBC, iMBC uses the digital content of MBC to provide content to internet, mobile and ISP users and foreign businesses. iMBC also plans projects for creating, developing, and circulating new content. The site offers free and paid VOD services for users to view programs online. While the public-service programs, news, radio and programs currently on-air are free, drama, entertainment, and current-affairs programs are not.