Mama's Family is an American television sitcom that premiered on NBC on January 22, 1983. It was cancelled in May 1984, but NBC would continue to air reruns until September 1985. In September 1986, Mama's Family returned in first-run syndication, where it aired for an additional four seasons, ending on February 24, 1990. Mama's Family is a spin-off of a recurring series of comedy sketches called The Family, which appeared on The Carol Burnett Show in the 1970s.

The show, set in the town of Raytown, Missouri, revolved around a typical squabbling family, headed by Thelma Harper — a buxom, blue-haired, purse-lipped, 65-year-old widow, who is loudmouthed and outspoken. Living with Thelma originally was only her uptight spinster sister Fran (Rue McClanahan), a journalist for a local paper. Thelma's son, Vinton (whose wife, Mitzi, had left him to become a cocktail waitress in Las Vegas, Nevada) and his two children, Sonja and Buzz, moved in with her later.

During the first season, Vinton forged a relationship with the Harpers' flirtatious next-door neighbor Naomi Oates (whom Thelma had a distaste for), and soon married her. After selling her house and losing the money in a bad business deal, Naomi and Vint are forced to move into Thelma's basement, where they remain for most of the show's run. Also seen on a recurring basis were Thelma's two daughters: the snobbish Ellen (Betty White) and the ornery Eunice (Carol Burnett). Harvey Korman, who directed many of the earlier episodes, made featured appearances as Eunice's husband, Ed Higgins. During the eleventh and final season of The Carol Burnett Show (1977), the Ed Higgins character was written out of The Family skits, having left Eunice. Korman also appeared at the beginning of each episode as the stuffed shirt Alistair Quince, who would soberly introduce the program in the style of Masterpiece Theatre. These monologues were cut out of the later syndicated reruns and the subsequent DVD release of the first season.

While not a huge ratings success, the first season garnered good enough ratings to be renewed for a second season. The first episode, "Mama Does Bellevegas" finished among the Top 30 programs, ranked at #28 for the week, garnering a commendable 18.6/28 rating/share. However, during the second season, the show dropped to 59th place in the yearly ratings due to being forced to compete with CBS's Top 10 hit Magnum, P.I..

After Mama's Family was cancelled by NBC in 1984, it moved to first-run syndication in 1986. Major cast changes occurred during the convert, with only Vicki Lawrence (Thelma), Ken Berry (Vinton), and Dorothy Lyman (Naomi) returning as regulars from the NBC run. Eric Brown and Karin Argoud, who played Buzz and Sonja in seasons one and two, did not reprise their roles; their characters, though mentioned briefly in the first episode of the third season, were never to be spoken of again. During Mama's Family's hiatus, Rue McClanahan (Aunt Fran) and Betty White (Ellen Jackson) had both gone on to star in the NBC sitcom The Golden Girls, rendering them unavailable to return. White returned as Ellen for one episode in 1986 while Fran was killed off in the first episode of season three, having choked to death on a toothpick at the local bar. Carol Burnett and Harvey Korman, meanwhile, did not reprise their roles either, resulting in their characters (Eunice and Ed Higgins) being written as having moved to Florida.

To fill the void, Allan Kayser was cast as Thelma's delinquent teenaged grandson, Bubba Higgins (Ed and Eunice's often mentioned, but never seen, young son from The Family sketches on The Carol Burnett Show), who was ordered to stay with the Harpers after being released from juvenile hall and placed on probation. Also added to the cast was Beverly Archer, who played the new character of Iola Boylan, the family's prissy neighbor; she was known for her catchphrase, "Knock, knock!" As the series continued, more new characters were sporadically brought in to evoke comedic situations.

The syndication years saw far less bickering than the NBC years and particularly The Family sketches. The Naomi and Vinton characters became far less serious and more dimwitted, and Mama was represented as more of the leader of the family throughout the show's syndication years. A recurring theme throughout the fifth season was Naomi's desire to become a mother. Following through with this, the penultimate season concluded with Naomi's announcement that she was pregnant. Preparation for the baby became a central theme of the sixth and final season. The series finale featured Naomi giving birth to a baby girl, who was named Tiffany Thelma.

*Note: Thelma's mother was shown on two occasions on the show (once in a flashback and once as a ghost, played both times by Vicki Lawrence), but her name was never revealed. Thelma mentions in ''Pomp and Consequences'' of having an older brother, Clyde. 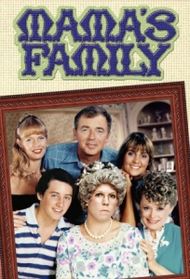 On September 26, 2006, Warner Bros. Television released Season 1 of Mama's Family on DVD. The DVD release features the syndicated versions of the episodes, which edits roughly three minutes from what originally aired. Warner Bros. claimed to only own the rights to the syndicated form.[1]

That same month, ION Television (formerly the PAX network) began airing reruns of the series. The show aired Monday through Wednesday at 8:00 to 9:00 pm. ET.[3] The series left ION to make room for ION's new fall lineup in 2008.

It had also aired on various stations across the country in syndication, often in the morning hours. WGNO, for instance, aired the program from the late 80s until 2002, and it was the number one program in the Greater New Orleans area during the 10:30pm timeslot, Monday through Fridays, trumping both Jay Leno and David Letterman, until Mama's Family's time slot was changed to accommodate a new ABC affiliation in 1996.

In 2007, and in 2008, CMT began re-airing the series. Full episodes were also available online via AOL Video.

Vicki Lawrence reprises her role of Mama in her touring stage show, entitled Vicki Lawrence and Mama: A Two-Woman Show. In the show, Lawrence first performs stand-up comedy as herself, then comes out in character as Mama, giving her opinions on modern-day topics. During the break between the two acts, the audience is shown bloopers from the syndicated seasons of the series. Lawrence also sings the lyrics she wrote for "Bless My Happy Home", the show's theme song, which were omitted from the version used on-air.