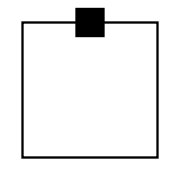 Monaural or monophonic sound reproduction (often shortened to mono) is single-channel. Typically there is only one microphone, one loudspeaker, or (in the case of headphones and multiple loudspeakers) channels are fed from a common signal path. In the case of multiple microphones the paths are mixed into a single signal path at some stage.

Monaural sound has been replaced by stereo sound in most entertainment applications. However, it remains the standard for radiotelephone communications, telephone networks, and Audio induction loops for use with hearing aids. A few radio stations, particularly of the talk radio variety, choose to broadcast in monaural sound, as a monaural signal has a slight advantage in signal strength over a stereophonic signal of the same power.

While some experiments were made with stereophonic recording and reproduction from the early days of the phonograph in the late 19th century, until the second half of the 20th century monaural was the rule for almost all audio recording.

Monaural sound is normal on:

No monaural standards exist for:

At various times artists have preferred to work in mono, either in recognition of the technical limitations of the equipment of the era or due to a simple preference. This can be seen as analogous to film makers working in black and white - such as John Mellencamp's 2010 album, No Better Than This, recorded in mono just like the mid-20th century blues and folk records it emulated were. Some early recordings such as The Beatles first four albums - Please Please Me, With The Beatles, A Hard Day's Night, and Beatles For Sale - were re-released in the CD era as monophonic in recognition that the source tapes for the earliest recordings were two track, with vocals on one track and instruments on the other (even though this was only true on the first two, while the later pair had been recorded on four-track). This was actually intended to provide flexibility in producing a final mono mix, not to provide a stereo recording, although due to demand this was done anyway and the early material was available on vinyl in either mono or stereo formats. In the 1970s, it was common in the pop world that stereophonic versions of mono tracks were generated electronically using filtering techniques to attempt to pick out various instruments and vocals, but these were often considered unsatisfactory due to the artifacts of the conversion process.[citation needed]

Many of Stanley Kubrick and Woody Allen's movies are shot in mono due to their director's preferences.

Monaural LP records were eventually phased out and no longer manufactured after the early 1970s.[citation needed] During the 1960s it was common that albums were released as both monaural LPs and stereo LPs, occasionally with slight differences between the two (again detailed information of The Beatles' recordings provide a good example of the differences). This was because many people owned mono record players which were incapable of playing stereo records, as well as the prevalence of AM radio. Because of the limited quantities pressed and alternate mixes of several tracks, the monaural versions of these albums are often valued more highly than their stereo LP counterparts in record collecting circles today.[citation needed]

On 9 September 2009, The Beatles re-released a remastered box set of their mono output spanning the Please Please Me album to The Beatles (commonly referred to as the "White Album"). The set, simply called The Beatles in Mono, also includes a two-disc summary of the mono singles, B-sides and EP tracks released throughout their career. Also included were 5 tracks originally mixed for a Yellow Submarine EP but never released. Bob Dylan followed suit on October 19, 2010 with The Original Mono Recordings, a box set featuring the mono releases from 1962's Bob Dylan to 1967's John Wesley Harding.