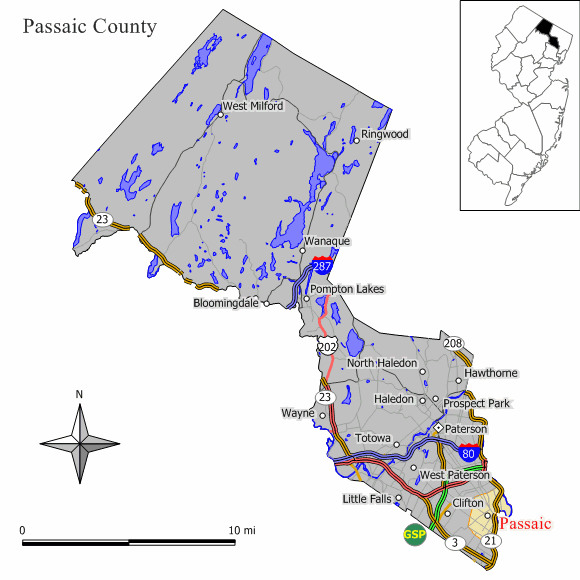 Passaic is a city in Passaic County, , . As of the , the city had a total population of 67,861. Located north of Newark on the , it was first settled in by Dutch traders, as Acquackanonk Township. The city and river draw their name from the word "pahsayèk" meaning "valley". [ [http://www.web-savvy.com/river/schuylkill/new_lenape.html Lenape Language / Pronunciation] , accessed , .]

The city originated from a Dutch settlement on the Passaic River established in which was called Acquackanonk. Industrial growth began in the 19th century, as Passaic became a and metalworking center. Passaic was formed within Acquackanonk Township on , , and was incorporated as an independent village on , . Passaic was chartered as a city on , .

A famous strike in 1926 against reductions in wages involved the right of free assembly.

Passaic has been called "The Birthplace of Television". [ [http://www.cinema.ucla.edu/collections/allTV.html UCLA Film and Television Archive Television Programs Preserved 1988 - 2000] . . Accessed , .] In 1931, experimental television station W2XCD began transmitting from DeForest Radio Corp. in Passaic. It has been called the first television station to transmit to the home, and was the first such station to broadcast a feature film. , formerly DeForest's chief engineer, opened pioneering TV manufacturer DuMont Laboratories in Passaic in 1937. DuMont later started the , the world's first commercial television network, in 1946.

Passaic has several business districts: Main Avenue begins in and follows the curve of the river to downtown. Broadway runs east - west through the center of the city, ending at Main Avenue in downtown. Monroe Street has many shops, restaurants and businesses reflecting the city's Latino and Eastern European populations.

Southwest Passaic (known as Passaic Park) is a residential and institutional center of , with 25-30 im on Shabbos, and 1,300 families, as well as being home to numerous s, schools and other institutions. There are also food and shopping establishments. [Rachel Berman, [http://www.jewishpress.com/print.do/19998/Passaic/Clifton_-_The_New_Jewish_Boom_Town.html "Passaic/Clifton - The New Jewish Boom Town"] , "", , .]

Passaic Park takes its name from Third Ward Park. This area is also noted for its large mansions and homes of various architectural styles, especially Victorian and Tudor. Several and apartment complexes are also located here including: Carlton Tower (the city's tallest structure), The Towers, and Barry Gardens (which are all located within walking distance of each other on a stretch of Passaic Avenue between Aycrigg Avenue and Barry Place).

The City of Passaic is governed under the Mayor-Council system of municipal government under the Faulkner Act. Under this form of government, the Mayor is elected directly by the voters for a four-year term. Seven Council Members serve four year terms on a staggered basis. ["2005 New Jersey Legislative District Data Book", , April 2005, p. 154.]

The interim of Passaic is , who, as City Council President automatically moved into this position upon the resignation by previous mayor , on Friday, 9 May 2008, after pleading guilty to federal charges. He was originally arrested by the on , in a Federal corruption probe that also included the arrests of Assemblymen and .

Rivera was a member of the , [cite web| url=http://www.mayorsagainstillegalguns.org/html/about/members.shtml| title=Mayors Against Illegal Guns: Coalition Members] a group with a stated goal of "making the public safer by getting illegal guns off the streets," and Acting Mayor Schaer is likely to continue the membership. The Coalition is co-chaired by Mayor and Mayor .

Members of the City Council are Gary Schaer (Council President), Maritza Colón-Montañez, Gerardo Fernandez, Jose Garcia, Chaim M. Munk and Daniel J. Schwartz. [ [http://www.cityofpassaic.com/Passaic%20Elected%20Officials/City%20Council%20Page.htm City Council Members] , City of Passaic. Accessed , .] The seat previously held by Marcellus Jackson is currently empty. Jackson and former councilman Jonathan Soto were arrested also arrested on , as part of the same sweep as Mayor Rivera. Before his resignation, Mayor Rivera attempted to hand-pick a replacement for Jackson, relying on is tie-breaker vote in a split council. The three council members who disagreed with Rivera's selection were able to postpone this selection by not attending the vote for the replacement, depriving Rivera of the minimum quota to produce the deadlock vote.

In addition to his roles as Council President and interim Mayor, Schaer also holds a seat in the New Jersey State Assembly. This dual-position is allowed under a grandfather clause in the state law that prevents dual-office-holding.

The is a type I school district, and is an independent legal entity administered by a nine-member elected by the voters of the school district. The school district is not a part of any regional or consolidated school district, and neither receives nor sends students, except for a limited number of special education students. The school system comprises 2 early childhood centers, 12 elementary schools (grades K-6), 1 middle school (grades 7-8), and for grades 9-12. The district is one of 31 s statewide. [ [http://www.nj.gov/cgi-bin/education/abbotts/abbotturls.pl?string=code&maxhits=100 Abbott Districts] , . Accessed , .]

The Collegiate School is a private al located in Passaic, serving students in prekindergarten through twelfth grade.

The Yeshiva Gedolah of Passaic, an advanced is an institute of learning for post-high school age men. Passaic also has a number of other orthodox educational institutions for primary and secondary education as well as other advanced seminaries and s for advanced and married students.

Portions of Passaic are part of an . In addition to other benefits to encourage employment within the Zone, shoppers can take advantage of a reduced 3½% rate (versus the 7% rate charged statewide). [ [http://www.state.nj.us/njbusiness/financing/tax/geographic.shtml#2 Geographic & Urban Redevelopment Tax Credit Programs: Urban Enterprise Zone Employee Tax Credit] , State of . Accessed , .]

Passaic is served by state roadways including Route 3 and Route 21. The and Interstate 80 are nearby.

Local bus transportation is provided by , with service to Paterson, Rutherford, Newark, Clifton, Garfield, and Wallington among other locations.

bus 190 provides local service and interstate service to in .

The Passaic New Jersey Transit rail station is located in the Passaic Park section, providing service on the Main Line southbound to , and to for New Jersey Transit and Amtrak connections to Pennsylvania Station in , Newark Airport and points north and south. Northbound service is provided to Paterson, Ridgewood and stations in Suffern and Port Jervis.

Commuter jitney buses operate along Main Avenue providing service to Paterson, Union City, the in , and points between. This service does not operate on an official schedule.

*In the 1960s television sitcom "", the character, Cpl. Randolph Agarn (played by ), hails from Passaic, Storch's home town. The city is occasionally mentioned - and featured - in episodes.
*The short-lived sitcom "" was set in Passaic, although, at the time of the disco-themed show, the city actually had little disco culture of its own. Ms. Travolta had an occasional role in , which starred Ms. Strassman as Mrs. Kotter.
*Numerous music groups have performed at the Loop Lounge on Broadway. Performers have included: . , , APB, , , and .
*The city's name was mentioned in "Raging Cory," an episode of .
*Several scenes of "" starring , , , , and were filmed in Passaic, the film's setting.
*On , , Passaic's Capitol Theatre was the site of the final live show by American band .
*In the 1920s, the Passaic High School basketball team, led by coach , won 159 consecutive games, earning the nickname "Wonder Team".
*The title character of the series "" was said to be born in Passaic.
*One of the mock Bialystock and Bloom musicals in "The Producers" was called "South Passaic".
*Passaic is mentioned in the series "Flight of the Conchords" when the band goes on a warm-up tour by playing a club in Passaic and damaging the club's amplifier.
*In the episode "" from "", sends away for organs to help re-build Carl's body from the "Passaic Organ Bank".
*Burt ("BS") Levy's series of novels starting with "" features a young mechanic from Passaic who becomes involved in the American scene in the 1950s.
*The original release of included an exterior wallpaper called "Passaic Aluminum Siding". [http://guides.ign.com/guides/11754/page_2.html]