Craig Newmark, the founder of Craigslist, in 2006

Craig Newmark began the service in 1995 as an email distribution list of friends, featuring local events in the San Francisco Bay Area, before becoming a web-based service in 1996 and expanding into other classified categories. It started expanding to other U.S. cities in 2000, and currently covers 50 countries.

Having observed people helping one another in friendly, social and trusting communal ways on the Internet via the WELL, MindVox and Usenet, and feeling isolated as a relative newcomer to San Francisco, Craigslist founder Craig Newmark decided to create something similar for local events.[3][4] In early 1995, he began an email distribution list to friends. Most of the early postings were submitted by Newmark and were notices of social events of interest to software and Internet developers living and working in the San Francisco Bay Area.

Soon, word of mouth led to rapid growth. The number of subscribers and postings grew rapidly. There was no moderation and Newmark was surprised when people started using the mailing list for non-event postings.[citation needed] People trying to get technical positions filled found that the list was a good way to reach people with the skills they were looking for. This led to the addition of a category for "jobs". User demand for more categories caused the list of categories to grow. The initial technology encountered some limits, so by June 1995 majordomo had been installed and the mailing list "Craigslist" resumed operations. Community members started asking for a web interface. Craig registered "craigslist.org", and the web site went live in 1996.

By early 1998, Newmark still thought his career was as a software engineer ("hardcore java programmer") and that Craigslist was a cool hobby that was getting him invited to the best parties for geeks and nerds.[citation needed] In the fall of 1998, the name "List Foundation" was introduced and Craigslist started transitioning to the use of this name. In April 1999, when Newmark learned of other organizations called "List Foundation", the use of this name was dropped. Craigslist incorporated as a private for-profit company in 1999.[3] Around the time of these events, Newmark realized that the site was growing so fast that he could stop working as a software engineer and work full-time running Craigslist. By April 2000, there were nine employees working out of Newmark's apartment in San Francisco.[5]

As of May 2008[update], 500 "cities" in 50 countries have Craigslist sites.[7] Some Craigslist sites cover large regions instead of individual metropolitan areas—for example, the US states of Delaware and Wyoming, the Colorado Western Slope, the California Gold Country, and the Upper Peninsula of Michigan are among the locations with their own Craigslist sites. As of 24 September 2009 (2009 -09-24)[update], there are 695 unique Craigslist sites that can be posted to. 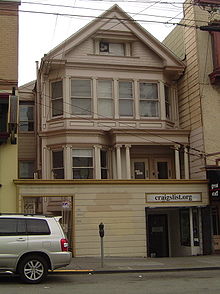 Craigslist headquarters in the Sunset District of San Francisco.

The site serves over 20 billion page views per month, putting it in 37th place overall among web sites worldwide and 10th place overall among web sites in the United States (per Alexa.com on March 24, 2011), with over 49.4 million unique monthly visitors in the United States alone (per Compete.com on January 8, 2010). With over 80 million new classified advertisements each month, Craigslist is the leading classifieds service in any medium. The site receives over 2 million new job listings each month, making it one of the top job boards in the world.[8][9] The 23 largest US Cities listed on the Craigslist home page collectively receive more than 300,000 postings per day just in the "for sale" and "housing" sections as of October, 2011.[10] The classified advertisements range from traditional buy/sell ads and community announcements to personal ads.

On August 13, 2004, Newmark announced on his blog that auction giant eBay had purchased a 25% stake in the company from a former principal. Some fans of Craigslist expressed concern that this development would affect the site's longtime non-commercial nature, but it remains to be seen what ramifications the change will actually have. As of May 2011[update], there have been no substantive changes to the usefulness or non-advertising nature of the site—no banner ads, charges for a few services provided to businesses.

The company is believed to be owned principally by Newmark, Buckmaster, and eBay (the three board members). eBay owns approximately 25%, and Newmark is believed to own the largest stake.[16][17][7]

In April 2008, eBay announced it was suing Craigslist to "safeguard its four-year financial investment." eBay claimed that in January 2008, Craigslist executives took actions that "unfairly diluted eBay's economic interest by more than 10%."[18] In response, Craigslist filed a counter-suit against eBay in May 2008 "to remedy the substantial and ongoing harm to fair competition" that Craigslist claims is constituted by eBay's actions as Craigslist shareholders.[19]

The site is notable for having undergone only minor design changes since its inception; even by 1996 standards, the design is very simple. Since 2001, the site design has remained virtually unchanged, and as of April 2010, Craigslist continues to avoid using images and uses only minimal CSS and JavaScript, a design philosophy common in the late 1990s but almost unheard of today for a major website.[citation needed]

Newmark says that Craigslist works because it gives people a voice, a sense of community trust and even intimacy. Other factors he cites are consistency of down-to-earth values, customer service and simplicity. Newmark was approached with an offer for running banner ads on Craigslist, but he decided to decline. In 2002, Craigslist staff posted mock-banner ads throughout the site as an April Fools' Day joke.[20]

Craigslist has a user flagging system to quickly identify illegal and inappropriate postings. Classified ad flagging does not require account log in or registration, and can be made anonymously by any visitor.[22] When a certain number of users flag a posting, it is removed. The number of flaggings required for a posting's removal is variable and remains unknown to all but craigslist.org.[22] Items are flagged for three categories: misplaced, prohibited, or spam/overpost.[23] Although users are given a short description of each flagging category, users ultimately flag on their preference, prejudice, or misunderstanding of the Craigslist Terms of Use.[24] Flaggings can also occur as acts of disruptive vandalism and for the removal of competitors postings.[22] To better understand and clarify flagging it is up to the users to define rules themselves in such places as the Unofficial Flagging FAQ[25] and the flag help forum.[26] The Flag Help Forum is an unmoderated volunteer community, it is not staffed by Craigslist employees, and it is not affiliated with craigslist.org.[27] The forum volunteers have no access to information about craigslist.org user accounts or ads, and must rely upon information supplied by the ad poster to try and piece together the reason an ad was flagged and removed.[28] The Flag Help Forum's unmoderated format allows anyone to post anonymously and without accountability.[29] The forums usefulness and effectiveness can be compromised by people who post malicious replies to help threads.[28]

The site has been found to be particularly appealing to help connect lesbians and gay men with one another because of its free and open nature in addition to it being hard to find gay people in one's area for some.[35]

In 2005, San Francisco Craigslist's men seeking men section was attributed to facilitating sexual encounters and was the second most common correlation to Syphilis infections.[35] The company has been pressured by San Francisco Department of Public Health officials leading Jim Buckmaster to state that the site has a very small staff and that the public must police themselves.[35] They have however added links to San Francisco City Clinic and STD forums.[35] 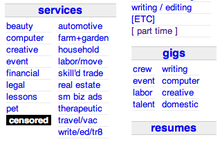 Craiglist website as it appeared on September 4, 2010 with black censored box in place of Adult Services

In 2002, a disclaimer was put on the "men seeking men", "casual encounters", "erotic services", and "rants and raves" boards to ensure that those who clicked on these sections were over the age of 18, but no disclaimer was put on the "men seeking women", "women seeking men" or "women seeking women" boards. As a response to charges of discrimination and negative stereotyping, Buckmaster explained that the company's policy is a response to user feedback requesting the warning on the more sexually explicit sections, including "men seeking men."[38] Today, all of the above listed boards (as well as some others) have a disclaimer.

On September 4, 2010, Craigslist closed the adult services section of its website in the United States. The site initially replaced the adult services page link with the word "censored" in white-on-black text. The site received criticism and complaints from attorneys general that the section's ads were facilitating prostitution and child sex trafficking.[40][41]

The adult services section link was still active in countries outside of the U.S.[40] Matt Zimmerman, senior staff attorney for the Electronic Frontier Foundation, said, "Craigslist isn't legally culpable for these posts, but the public pressure has increased and Craigslist is a small company." Brian Carver, attorney and assistant professor at UC Berkeley, said that legal threats could have a chilling effect on online expression. "If you impose liability on Craigslist, YouTube and Facebook for anything their users do, then they're not going to take chances. It would likely result in the takedown of what might otherwise be perfectly legitimate free expression."[41]

Craigslist announced on September 15, 2010, that it had closed its adult services in the United States for good. However, it defended its right to carry such ads and its efforts to fight prostitution and sex trafficking. Free speech and some sex crime victim advocates criticized the removal of the section, saying that it threatened free speech and that it diminished law enforcement's ability to track criminals. However, the removal was applauded by many state attorneys general and some other groups fighting sex crimes. Craigslist said that there is some indication that those who posted ads in the adult services section are posting elsewhere. Sex ads cost $10 initially and it was estimated they would have brought in $44 million this year had they continued.[44][45] In the four months following the closure, monthly revenue from sex ads on six other sites (primarily backpage.com) increased from $2.1 to $3.1 million, partly due to price increases.[46]

As predicted by many, the ads in question simply moved to the talent section.

In July 2005, the San Francisco Chronicle criticized Craigslist for allowing ads from dog breeders, and thereby allegedly encouraging the over breeding and irresponsible selling of pit bulls in the Bay Area.[48]

In January 2006, the San Francisco Bay Guardian published an editorial criticizing Craigslist for moving into local communities and "threatening to eviscerate" local alternative newspapers. Craigslist has been compared to Wal-Mart, a multinational corporation that some feel crushes small local businesses when they move into towns and offer a huge assortment of goods at lower prices.[49]

Since 2004, the Craigslist Foundation has hosted an annual conference called Boot Camp, an in-person event that focuses on skills for connecting, motivating and inspiring greater community involvement and impact. Boot Camp has drawn more than 10,000 people since its inception.[citation needed] The latest Boot Camp event was held on Saturday, August 14, 2010.[77]

The Craigslist Foundation is also the fiscal sponsor for Our Good Works, the organization that manages AllforGood.org, an application that distributes volunteer opportunities across the web and helps people get involved in their communities.[78]