The wind, Sun, and biomass are three renewable energy sources 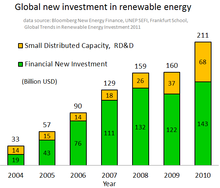