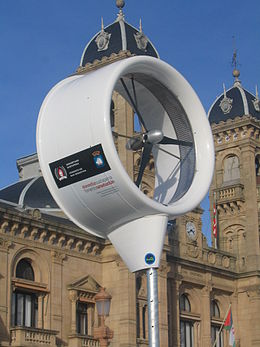 Most plants are built this way due to a number of economic, health & safety, logistical, environmental, geographical and geological factors. For example, coal power plants are built away from cities to prevent their heavy air pollution from affecting the populace. In addition, such plants are often built near collieries to minimize the cost of transporting coal. Hydroelectric plants are by their nature limited to operating at sites with sufficient water flow. Most power plants are often considered to be too far away for their waste heat to be used for heating buildings.

Low pollution is a crucial advantage of combined cycle plants that burn natural gas. The low pollution permits the plants to be near enough to a city to be used for district heating and cooling.

Distributed generation is another approach. It reduces the amount of energy lost in transmitting electricity because the electricity is generated very near where it is used, perhaps even in the same building. This also reduces the size and number of power lines that must be constructed.

Typical distributed power sources in a Feed-in Tariff (FIT) scheme have low maintenance, low pollution and high efficiencies. In the past, these traits required dedicated operating engineers and large complex plants to reduce pollution. However, modern embedded systems can provide these traits with automated operation and renewables, such as sunlight, wind and geothermal. This reduces the size of power plant that can show a profit.

Distributed energy resource (DER) systems are small-scale power generation technologies (typically in the range of 3 kW to 10,000 kW) used to provide an alternative to or an enhancement of the traditional electric power system. The usual problem with distributed generators are their high costs.

One popular source is solar panels on the roofs of buildings. The production cost is $0.99 to 2.00/W (2007) plus installation and supporting equipment unless the installation is Do it yourself (DIY) bringing the cost to $5.25 to 7.50 (2010).[1] This is comparable to coal power plant costs of $0.582 to 0.906/W (1979),[2][3] adjusting for inflation. Nuclear power is higher at $2.2 to $6.00/W (2007).[4] Some solar cells ("thin-film" type) also have waste disposal issues, since "thin-film" type solar cells often contain heavy-metal electronic wastes, such as Cadmium telluride (CdTe) and Copper indium gallium selenide (CuInGaSe), and need to be recycled. As opposed to silicon semi-conductor type solar cells which is made from quartz. The plus side is that unlike coal and nuclear, there are no fuel costs, pollution, mining safety or operating safety issues. Solar also has a low duty cycle, producing peak power at local noon each day. Average duty cycle is typically 20%.

Another source is small wind turbines. These have low maintenance, and low pollution. Construction costs are higher ($0.80/W, 2007) per watt than large power plants, except in very windy areas. Wind towers and generators have substantial insurable liabilities caused by high winds, but good operating safety. In some areas of the US there may also be Property Tax costs involved with wind turbines that are not offset by incentives or accelerated depreciation.[5] Wind also tends to be complementary to solar; on days there is no sun there tends to be wind and vice versa.[citation needed] Many distributed generation sites combine wind power and solar power such as Slippery Rock University, which can be monitored online.

Distributed cogeneration sources use natural gas-fired microturbines or reciprocating engines to turn generators. The hot exhaust is then used for space or water heating, or to drive an absorptive chiller [6] for air-conditioning. The clean fuel has only low pollution. Designs currently have uneven reliability, with some makes having excellent maintenance costs, and others being unacceptable.

Cogenerators are also more expensive per watt than central generators. They find favor because most buildings already burn fuels, and the cogeneration can extract more value from the fuel.

Some larger installations utilize combined cycle generation. Usually this consists of a gas turbine whose exhaust boils water for a steam turbine in a Rankine cycle. The condenser of the steam cycle provides the heat for space heating or an absorptive chiller. Combined cycle plants with cogeneration have the highest known thermal efficiencies, often exceeding 85%.

In countries with high pressure gas distribution, small turbines can be used to bring the gas pressure to domestic levels whilst extracting useful energy. If the UK were to implement this countrywide an additional 2-4 GWe would become available. (Note that the energy is already being generated elsewhere to provide the high initial gas pressure - this method simply distributes the energy via a different route.)

Future generations of electric vehicles will have the ability to deliver power from the battery into the grid when needed.[7] An electric vehicle network could also be an important distributed generation resource. 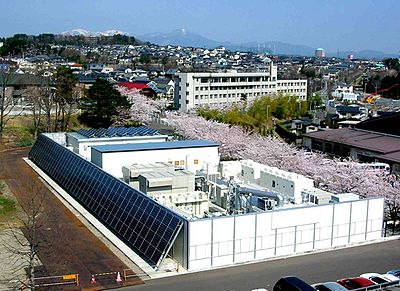 Picture of a local microgrid

A microgrid is a localized grouping of electricity generation, energy storage, and loads that normally operates connected to a traditional centralized grid (macrogrid). This single point of common coupling with the macrogrid can be disconnected. The microgrid can then function autonomously.[8] Generation and loads in a microgrid are usually interconnected at low voltage. From the point of view of the grid operator, a connected microgrid can be controlled as if it was one entity. Microgrid generation resources can include fuel cells, wind, solar, or other energy sources. The multiple dispersed generation sources and ability to isolate the microgrid from a larger network would provide highly reliable electric power. Byproduct heat from generation sources such as microturbines could be used for local process heating or space heating, allowing flexible trade off between the needs for heat and electric power.

DER systems may include the following devices/technologies:

In 2010 Colorado enacted a law requiring that by 2020 that 3% of the power generated in Colorado utilize distributed generation of some sort.[9][10]