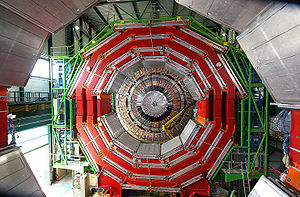 View of the CMS endcap through the barrel sections. The ladder to the lower right gives an impression of scale.

The Compact Muon Solenoid (CMS) experiment is one of two large general-purpose particle physics detectors built on the proton-proton Large Hadron Collider (LHC) at CERN in Switzerland and France. Approximately 3,600 people from 183 scientific institutes, representing 38 countries form the CMS collaboration who built and now operate the detector.[1] It is located in an underground cavern at Cessy in France, just across the border from Geneva.

Recent collider experiments such as the now-dismantled Large Electron-Positron Collider at CERN and the (as of October 2011[update]) recently closed Tevatron at Fermilab have provided remarkable insights into, and precision tests of, the Standard Model of Particle Physics. However, a number of questions remain unanswered.

A principal concern is the lack of any direct evidence for the Higgs Boson, the particle resulting from the Higgs mechanism which provides an explanation for the masses of elementary particles. Other questions include uncertainties in the mathematical behaviour of the Standard Model at high energies, the lack of any particle physics explanation for dark matter and the reasons for the imbalance of matter and antimatter observed in the Universe.

The Large Hadron Collider and the associated experiments are designed to address a number of these questions.

The main goals of the experiment are:

The ATLAS experiment, at the other side of the LHC ring is designed with similar goals in mind, and the two experiments are designed to complement each other both to extend reach and to provide corroboration of findings.

CMS is designed as a general-purpose detector, capable of studying many aspects of proton collisions at 14 TeV, the center-of-mass energy of the LHC particle accelerator. It contains subsystems which are designed to measure the energy and momentum of photons, electrons, muons, and other products of the collisions. The innermost layer is a silicon-based tracker. Surrounding it is a scintillating crystal electromagnetic calorimeter, which is itself surrounded with a sampling calorimeter for hadrons. The tracker and the calorimetry are compact enough to fit inside the CM Solenoid which generates a powerful magnetic field of 3.8 T. Outside the magnet are the large muon detectors, which are inside the return yoke of the magnet. 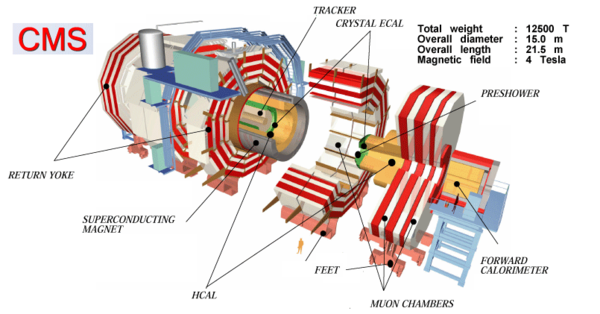 The set up of the CMS. In the middle, under the so-called barrel there is a man for scale. (HCAL=hadron calorimeter, ECAL=electromagnetic calorimeter)

A slice of the CMS detector.

At full design luminosity each of the two LHC beams will contain 2,808 bunches of 1.15×1011 protons. The interval between crossings is 25 ns, although the number of collisions per second is only 31.6 million due to gaps in the beam as injector magnets are activated and deactivated.

The first test which ran in September 2008 was expected to operate at a lower collision energy of 10 TeV but this was prevented by the 19 September 2008 shutdown. When at this target level, the LHC will have a significantly reduced luminosity, due to both fewer proton bunches in each beam and fewer protons per bunch. The reduced bunch frequency does allow the crossing angle to be reduced to zero however, as bunches are far enough spaced to prevent secondary collisions in the experimental beampipe.

The silicon strip tracker of CMS.

Immediately around the interaction point the inner tracker serves to identify the tracks of individual particles and match them to the vertices from which they originated. The curvature of charged particle tracks in the magnetic field allows their charge and momentum to be measured.

The CMS silicon tracker consists of 13 layers in the central region and 14 layers in the endcaps. The innermost three layers (up to 11 cm radius) consist of 100×150 μm pixels, 66 million in total.

During full luminosity collisions the occupancy of the pixel layers per event is expected to be 0.1%, and 1–2% in the strip layers. The expected SLHC upgrade will increase the number of interactions to the point where over-occupancy may significantly reduce trackfinding effectiveness.

This part of the detector is the world's largest silicon detector. It has 205 m2 of silicon sensors (approximately the area of a tennis court) comprising 76 million channels.[2]

The Electromagnetic Calorimeter (ECAL) is designed to measure with high accuracy the energies of electrons and photons.

The ECAL is constructed from crystals of lead tungstate, PbWO4. This is an extremely dense but optically clear material, ideal for stopping high energy particles. It has a radiation length of χ0 = 0.89 cm, and has a rapid light yield, with 80% of light yield within one crossing time (25 ns). This is balanced however by a relatively low light yield of 30 photons per MeV of incident energy.

The crystals used have a front size of 22 mm × 22 mm and a depth of 230 mm. They are set in a matrix of carbon fibre to keep them optically isolated, and backed by silicon avalanche photodiodes for readout. The barrel region consists of 61,200 crystals, with a further 7,324 in each of the endcaps.

At the endcaps the ECAL inner surface is covered by the preshower subdetector, consisting of two layers of lead interleaved with two layers of silicon strip detectors. Its purpose is to aid in pion-photon discrimination. 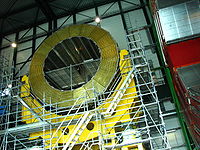 Half of the Hadron Calorimeter

The purpose of the Hadronic Calorimeter (HCAL) is both to measure the energy of individual hadrons produced in each event, and to be as near to hermetic around the interaction region as possible to allow events with missing energy to be identified.

The HCAL consists of layers of dense material (brass or steel) interleaved with tiles of plastic scintillators, read out via wavelength-shifting fibres by hybrid photodiodes. This combination was determined to allow the maximum amount of absorbing material inside of the magnet coil.

The high pseudorapidity region (3.0 < | η | < 5.0) is instrumented by the Hadronic Forward detector. Located 11 m either side of the interaction point, this uses a slightly different technology of steel absorbers and quartz fibres for readout, designed to allow better separation of particles in the congested forward region.

The brass used in the endcaps of the HCAL used to be Russian artillery shells.[3]

Like most particle physics detectors, CMS has a large solenoid magnet. This allows the charge/mass ratio of particles to be determined from the curved track that they follow in the magnetic field. It is 13 m long and 6 m in diameter, and its refrigerated superconducting niobium-titanium coils were originally intended to produce a 4 T magnetic field. It was recently announced that the magnet will run at 3.8 T instead of the full design strength in order to maximize longevity.[4]

The inductance of the magnet is 14 Η and the nominal current for 4 T is 19,500 A, giving a total stored energy of 2.66 GJ, equivalent to about half-a-tonne of TNT. There are dump circuits to safely dissipate this energy should the magnet quench. The circuit resistance (essentially just the cables from the power converter to the cryostat) has a value of 0.1 mΩ which leads to a circuit time constant of nearly 39 hours. This is the longest time constant of any circuit at CERN. The operating current for 3.8 T is 18,160 A, giving a stored energy of 2.3 GJ.

To identify muons and measure their momenta, CMS uses three types of detector: drift tubes (DT), cathode strip chambers (CSC) and resistive plate chambers (RPC). The DTs are used for precise trajectory measurements in the central barrel region, while the CSCs are used in the end caps. The RPCs provide a fast signal when a muon passes through the muon detector, and are installed in both the barrel and the end caps.

Collecting and collating the data 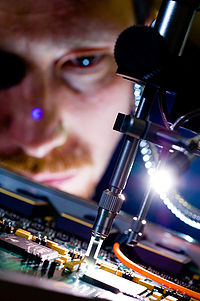 Testing the data read-out electronics for the tracker.

New particles discovered in CMS will be typically unstable and rapidly transform into a cascade of lighter, more stable and better understood particles. Particles travelling through CMS leave behind characteristic patterns, or ‘signatures’, in the different layers, allowing them to be identified. The presence (or not) of any new particles can then be inferred.

To have a good chance of producing a rare particle, such as a Higgs boson, a very large number of collisions is required. Most collision events in the detector are "soft" and do not produce interesting effects. The amount of raw data from each crossing is approximately 1 megabytes, which at the 40 MHz crossing rate would result in 40 terabytes of data a second, an amount that the experiment cannot hope to store or even process properly. The trigger system reduces the rate of interesting events down to a manageable 100 per second.

To accomplish this, a series of "trigger" stages are employed. All the data from each crossing is held in buffers within the detector while a small amount of key information is used to perform a fast, approximate calculation to identify features of interest such as high energy jets, muons or missing energy. This "Level 1" calculation is completed in around 1 µs, and event rate is reduced by a factor of about thousand down to 50 kHz. All these calculations are done on fast, custom hardware using reprogrammable Field-programmable gate arrays (FPGA).

If an event is passed by the Level 1 trigger all the data still buffered in the detector is sent over fibre-optic links to the "High Level" trigger, which is software (mainly written in C++) running on ordinary computer servers. The lower event rate in the High Level trigger allows time for much more detailed analysis of the event to be done than in the Level 1 trigger. The High Level trigger reduces the event rate by a further factor of about a thousand down to around 100 events per second. These are then stored on tape for future analysis.

Data that has passed the triggering stages and been stored on tape is duplicated using the Grid to additional sites around the world for easier access and redundancy. Physicists are then able to use the Grid to access and run their analyses on the data.