Peak demand is used to refer to a historically high point in the sales record of a particular product. In terms of energy use, peak demand describes a period of strong consumer demand.

Peak demand, peak load or on-peak are terms used in energy demand management describing a period in which electrical power is expected to be provided for a sustained period at a significantly higher than average supply level. Peak demand fluctuations may occur on daily, monthly, seasonal and yearly cycles. For an electric utility company, the actual point of peak demand is a single half hour or hourly period which represents the highest point of customer consumption of electricity.

Peak demand is considered to be the opposite to off-peak hours when power demand is usually low.

There are off-peak time-of-use (TOU) rates. 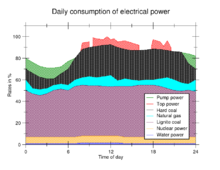 Peak demand may exceed the maximum supply levels that the electrical power industry can generate, resulting in power outages and load shedding. This often occurs during heatwaves when use of air conditioners and powered fans raises the rate of energy consumption significantly. During a shortage authorities may request the public to curtail their energy use and shift it to a non-peak period.