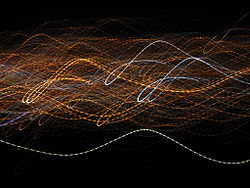 Usually hidden from the unaided eye, the blinking of (non-incandescent) lighting powered by AC mains is revealed in this motion-blurred long exposure of city lights. Light is emitted twice each cycle.

Power in an electric circuit is the rate of flow of energy past a given point of the circuit. In alternating current circuits, energy storage elements such as inductance and capacitance may result in periodic reversals of the direction of energy flow. The portion of power that, averaged over a complete cycle of the AC waveform, results in net transfer of energy in one direction is known as real power. The portion of power due to stored energy, which returns to the source in each cycle, is known as reactive power. 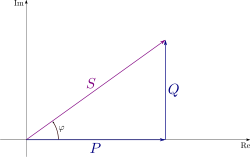 In a simple alternating current (AC) circuit consisting of a source and a linear load, both the current and voltage are sinusoidal. If the load is purely resistive, the two quantities reverse their polarity at the same time. At every instant the product of voltage and current is positive, indicating that the direction of energy flow does not reverse. In this case, only real power is transferred.

If the loads are purely reactive, then the voltage and current are 90 degrees out of phase. For half of each cycle, the product of voltage and current is positive, but on the other half of the cycle, the product is negative, indicating that on average, exactly as much energy flows toward the load as flows back. There is no net energy flow over one cycle. In this case, only reactive energy flows—there is no net transfer of energy to the load.

Engineers care about apparent power, because even though the current associated with reactive power does no work at the load, it heats the wires, wasting energy. Conductors, transformers and generators must be sized to carry the total current, not just the current that does useful work.

Another consequence is that adding the apparent power for two loads will not accurately give the total apparent power unless they have the same displacement between current and voltage (the same power factor).

Conventionally, capacitors are considered to generate reactive power and inductors to consume it. If a capacitor and an inductor are placed in parallel, then the currents flowing through the inductor and the capacitor tend to cancel rather than add. This is the fundamental mechanism for controlling the power factor in electric power transmission; capacitors (or inductors) are inserted in a circuit to partially cancel reactive power 'consumed' by the load.

Engineers use the following terms to describe energy flow in a system (and assign each of them a different unit to differentiate between them):

In the diagram, P is the real power, Q is the reactive power (in this case positive), S is the complex power and the length of S is the apparent power.

The unit for all forms of power is the watt (symbol: W), but this unit is generally reserved for real power. Apparent power is conventionally expressed in volt-amperes (VA) since it is the product of rms voltage and rms current. The unit for reactive power is expressed as var, which stands for volt-amperes reactive. Since reactive power transfers no net energy to the load, it is sometimes called "wattless" power. It does, however, serve an important function in electrical grids and its lack has been cited as a significant factor in the Northeast Blackout of 2003.[2]

Understanding the relationship between these three quantities lies at the heart of understanding power engineering. The mathematical relationship among them can be represented by vectors or expressed using complex numbers, S = P + jQ (where j is the imaginary unit).

The ratio between real power and apparent power in a circuit is called the power factor. It's a practical measure of the efficiency of a power distribution system. For two systems transmitting the same amount of real power, the system with the lower power factor will have higher circulating currents due to energy that returns to the source from energy storage in the load. These higher currents produce higher losses and reduce overall transmission efficiency. A lower power factor circuit will have a higher apparent power and higher losses for the same amount of real power.

The power factor is one when the voltage and current are in phase. It is zero when the current leads or lags the voltage by 90 degrees. Power factors are usually stated as "leading" or "lagging" to show the sign of the phase angle of current with respect to voltage.

Where the waveforms are purely sinusoidal, the power factor is the cosine of the phase angle (φ) between the current and voltage sinusoid waveforms. Equipment data sheets and nameplates often will abbreviate power factor as "cos ϕ" for this reason.

Reactive power flow on the alternating current transmission system is needed to support the transfer of real power over the network. In alternating current circuits energy is stored temporarily in inductive and capacitive elements, which can result in the periodic reversal of the direction of energy flow. The portion of power flow remaining after being averaged over a complete AC waveform is the real power, which is energy that can be used to do work (for example overcome friction in a motor, or heat an element). On the other hand the portion of power flow that is temporarily stored in the form of electric or magnetic fields, due to inductive and capacitive network elements, and returned to source is known as the reactive power.

AC connected devices that store energy in the form of a magnetic field include inductive devices called reactors, which consist of a large coil of wire. When a voltage is initially placed across the coil a magnetic field builds up, and it takes a period of time for the current to reach full value. This causes the current to lag the voltage in phase, and hence these devices are said to absorb reactive power.

A capacitor is an AC device that stores energy in the form of an electric field. When current is driven through the capacitor, it takes a period of time for charge to build up to produce the full voltage difference. On an AC network the voltage across a capacitor is always changing – the capacitor will oppose this change causing the voltage to lag behind the current. In other words the current leads the voltage in phase, and hence these devices are said to generate reactive power.

Transmission connected generators are generally required to support reactive power flow. For example on the Great Britain transmission system generators are required by the Grid Code Requirements to supply their rated power between the limits of 0.85 power factor lagging and 0.95 power factor leading at the designated terminals. The system operator will perform switching actions to maintain a secure and economical voltage profile while maintaining a reactive power balance equation:

The ‘System gain’ is an important source of reactive power in the above power balance equation, which is generated by the capacitive nature of the transmission network itself. By making decisive switching actions in the early morning before the demand increases, the system gain can be maximized early on, helping to secure the system for the whole day.

To balance the equation some pre-fault reactive generator use will be required. Other sources of reactive power that will also be used include shunt capacitors, shunt reactors, Static VAR Compensators and voltage control circuits.

While real power and reactive power are well defined in any system, the definition of apparent power for unbalanced polyphase systems is considered to be one of the most controversial topics in power engineering. Originally, apparent power arose merely as a figure of merit. Major delineations of the concept are attributed to Stanley's Phenomena of Retardation in the Induction Coil (1888) and Steinmetz's Theoretical Elements of Engineering (1915). However, with the development of three phase power distribution, it became clear that the definition of apparent power and the power factor could not be applied to unbalanced polyphase systems. In 1920, a "Special Joint Committee of the AIEE and the National Electric Light Association" met to resolve the issue. They considered two definitions:

The 1920 committee found no consensus and the topic continued to dominate discussions. In 1930 another committee formed and once again failed to resolve the question. The transcripts of their discussions are the lengthiest and most controversial ever published by the AIEE (Emanuel, 1993). Further resolution of this debate did not come until the late 1990s.

Where X is the reactance of the capacitor or inductor.

For real power it would at first appear that we would have to calculate loads of product terms and average all of them. However if we look at one of these product terms in more detail we come to a very interesting result.

however the time average of a function of the form cos(ωt+k) is zero provided that ω is nonzero. Therefore the only product terms that have a nonzero average are those where the frequency of voltage and current match. In other words it is possible to calculate real (average) power by simply treating each frequency separately and adding up the answers.

Furthermore, if we assume the voltage of the mains supply is a single frequency (which it usually is), this shows that harmonic currents are a bad thing. They will increase the rms current (since there will be non-zero terms added) and therefore apparent power, but they will have no effect on the real power transferred. Hence, harmonic currents will reduce the power factor.

Harmonic currents can be reduced by a filter placed at the input of the device. Typically this will consist of either just a capacitor (relying on parasitic resistance and inductance in the supply) or a capacitor-inductor network. An active power factor correction circuit at the input would generally reduce the harmonic currents further and maintain the power factor closer to unity.