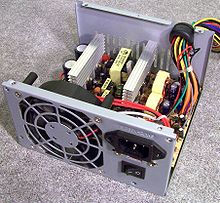 A power supply unit (PSU) supplies direct current (DC) power to the other components in a computer. It converts general-purpose alternating current (AC) electric power from the mains (110 V to 120 V at 60 Hz [115 V nominal] in North America, parts of South America, Japan, and Taiwan; 220 V to 240 V at 50 Hz [230 V nominal] in most of the rest of the world) to low-voltage (for a desktop computer: 12 V, 5 V, 5VSB, 3V3, −5 V, and −12 V) DC power for the internal components of the computer. Some power supplies have a switch to select either 230 V or 115 V. Other models are able to accept any voltage and frequency between those limits and some models only operate from one of the two mains supply standards.

Most modern desktop computer power supplies conform to the ATX form factor. ATX power supplies are turned on and off by a signal from the motherboard. They also provide a signal to the motherboard to indicate when the DC power lines are correct so that the computer is able to boot up. While an ATX power supply is connected to the mains supply it provides a 5 V stand-by (5VSB) line so that the standby functions on the computer and certain peripherals are powered. The most recent ATX PSU standard is version 2.31 of mid-2008.

Computer power supplies are rated based on their maximum output power. Typical power ranges are from 500 W to lower than 300 W for small form factor systems intended as ordinary home computers, the use of which is limited to web-surfing and burning and playing DVDs. Power supplies used by gamers and enthusiasts mostly range from 450 W to 1400 W. Typical gaming PCs feature power supplies in the range of 350–800 W, with higher-end PCs demanding 800–1400 W supplies. The highest-end units are up to 2 kW strong and are intended mainly for servers and, to a lesser degree, extreme performance computers with multiple processors, several hard disks and multiple graphics cards. The power rating of a PC power supply is not officially certified and is self-claimed by each manufacturer. A common way to reach the power figure for PC PSUs is by adding the power available on each rail, which will not give a true power figure. Therefore it is possible to overload a PSU on one rail without having to use the maximum rated power.

This may mean that if:

and if those ratings are accurate, then PSU B would have to be considered a vastly superior unit, despite its lower overall power rating. PSU A may only be capable of delivering a fraction of its rated power under real world conditions.

This tendency has led in turn to greatly overspecified power supply recommendations, and a shortage of high-quality power supplies with reasonable capacities. Simple, general purpose computers rarely require more than 300–350 watts maximum.[1] Higher end computers such as servers and gaming machines with multiple high power GPUs are among the few exceptions.

Most computer power supplies are a square metal box, and have a large bundle of wires emerging from one end. Opposite the wire bundle is the back face of the power supply, with an air vent and an IEC 60320 C14 connector to supply AC power. There may optionally be a power switch and/or a voltage selector switch. A label on one side of the box lists technical information about the power supply, including safety certifications maximum output power. Common certification marks for safety are the UL mark, GS mark, TÜV, NEMKO, SEMKO, DEMKO, FIMKO, CCC, CSA, VDE, GOST R and BSMI. Common certificate marks for EMI/RFI are the CE mark, FCC and C-tick. The CE mark is required for power supplies sold in Europe and India.

A RoHS or 80 PLUS can also sometimes be seen.

Dimensions of an ATX power supply are 150 mm width, 86 mm height, and typically 140 mm depth, although the depth can vary from brand to brand.

Various connectors from a computer PSU.

There are two basic differences between AT and ATX power supplies: The connectors that provide power to the motherboard, and the soft switch. On older AT power supplies, the Power-on switch wire from the front of the computer is connected directly to the power supply.

On newer ATX power supplies, the power switch on the front of the computer goes to the motherboard over a connector labeled something like; PS ON, Power SW, SW Power, etc. This allows other hardware and/or software to turn the system on and off.

The Thin Form Factor with 12 Volt connector (TFX12V) configuration has been optimized for small and low profile microATX and FlexATX system layouts. The long narrow profile of the power supply (shown in Figure 1) fits easily into low profile systems. The fan placement can be used to efficiently exhaust air from the processor and core area of the motherboard, making possible smaller, more efficient systems using common industry ingredients.[2]

Most portable computers have power supplies that provide 25 to 200 watts. In portable computers (such as laptops) there is usually an external power supply (sometimes referred to as a "power brick" due to its similarity, in size, shape and weight, to a real brick) which converts AC power to one DC voltage (most commonly 19 V), and further DC-DC conversion occurs within the laptop to supply the various DC voltages required by the other components of the portable computer.

Some web servers use a single-voltage 12 volt power supply. All other voltages are generated by voltage regulator modules on the motherboard.[3]

It's important to match the capacity of a power supply to the power needs of the computer. The energy efficiency of power supplies drops significantly at low loads. Efficiency generally peaks at about 50–75% load. The curve varies from model to model (examples of how this curve looks can be seen on test reports of energy efficient models found on the 80 PLUS website). As a rule of thumb for standard power supplies it is usually appropriate to buy a supply such that the calculated typical consumption of one's computer is about 60% of the rated capacity of the supply provided that the calculated maximum consumption of the computer does not exceed the rated capacity of the supply. Note that advice on overall power supply ratings often given by the manufacturer of single component, typically graphics cards, should be treated with great skepticism. These manufacturers want to minimize support issues due to under rating of the power supply specifications and advise customers to use a more powerful power supply to avoid these issues.

Various initiatives are underway to improve the efficiency of computer power supplies. Climate savers computing initiative promotes energy saving and reduction of greenhouse gas emissions by encouraging development and use of more efficient power supplies. 80 PLUS certifies power supplies that meet certain efficiency criteria, and encourages their use via financial incentives. On top of that the businesses end up using less electricity to cool the PSU and the computer's themselves and thus save an initially large sum(i.e. incentive + saved electricity = higher profit). 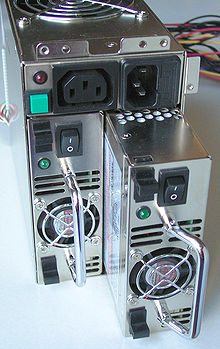 While modular cabling can help reduce case clutter, they have often been criticized for creating electrical resistance. Some third party websites that do power supply testing have confirmed that the quality of the connector, the age of the connector, the number of times it was inserted/removed, and various other variables such as dust can all raise resistance. However, this is somewhat inconsequential as the amount of this resistance in a good connector is small compared to the resistance generated by the length of the wire itself.[10]