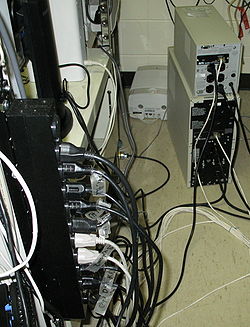 A 10-outlet rack-mount PDU without built-in surge protection, connected to a UPS (bottom unit on right)

A power distribution unit (PDU) is a device fitted with multiple outputs designed to distribute electric power, especially to racks of computers and networking equipment located within a data center.

The term (PDU) may refer to two major classes of hardware power devices; the first and typically the general unqualified term refers to the category of relatively higher-cost floor-mounted power distribution devices which transform one or more larger capacity raw power feeds into any number of lower capacity distributed power feeds. These floor-mounted PDU devices are typically composed of transformers and circuit breakers and may optionally include monitoring controllers using protocols such as Modbus or SNMP. In a typical data center for example, there would be relatively few of these floor-mounted PDU devices, located along the walls of in central locations for larger spaces. Each floor-mounted PDU would feed a much larger number of racks and rows of racks.

The second class of device is a much smaller and lower cost device which is fitted with multiple appliance outlets designed to distribute electric power within a rack, especially to computers and networking equipment located within a data center. The second type of PDU is sometimes called a Smart-PDU, Rack-based PDU, Intelligent PDU or simply "Power Strip" by various IT professionals.

Rack-based PDUs are used for taking the supplied voltage and current and distributing it electrically to more common outlets, for example from 240 V 30 A single phase to multiple 120 V 15 A or 120 V 20 A plugs. They are used in computer data centers, in stage shows, by DJs, and in other electrically intensive applications. Some premium units have features like remote power monitoring and power state control down to the unit or individual plug level. Certain manufactures also include environmental monitoring via RS485, USB, Dallas 1-Wire or serial ports. The power outlets themselves are typically IEC-C19, IEC-C13 or NEMA 5-20 style outlets.

Rack-based PDU refers to what amounts to a well-constructed power strip suitable for data center use. Two basic varieties distinguished by the type of input power are common: single-phase and three-phase. The output power (i.e. the power to the load device) is almost always single-phase, however. In the case of a three-phase PDU, each of the three phases appears individually on one-third of the included receptacles. Rack-PDUs can be dumb—meaning that they have no instrumentation and are not manageable, or they can be metered—meaning that they are equipped with a display that shows current load on each phase, or they can be switched and metered meaning that some or all of their receptacles can be individually switched on or off remotely and the meter usage as well.

A typical application area could be a mobile measurement station, where several devices can be supplied with power from a single distribution unit.

Some PDUs provide a means of remote access. Common methods are a RS-232 serial connection or a LAN network controller that can be accessed though Telnet, SSH, SNMP or a web page. This allows an administrator to access the PDU from a remote terminal and interface with it to turn on or off outlets, schedule power shutdowns, control load, etc. This can be helpful if a remote machine has gone into an unresponsive state and cannot be restarted though normal means. An administrator can connect to the PDU the machine is plugged into to power cycle the machine.

One of the challenges in selecting PDUs for a data center application is to balance the cost of the Rack-PDU in the context of the organization's energy-management goals. Inexpensive Rack-PDUs may distribute power effectively, but they offer little if any understanding or control of that energy flow. With energy costs rising over the past several years (circa 2010), IT professionals are beginning to take a more comprehensive view of power management with Rack-PDUs with more intelligence. The trend is more intelligence and higher quality Rack-PDU devices.

Note: Important to remember, in North America the standard 240 volt circuit (120 volts x2 plus neutral and ground) has two legs at 120 volts. Most recently, Data Centers are being outfitted with Single-phase 208volt connections.