Cost of electricity by source

Cost of electricity by source

The cost of electricity generated by different sources measures the cost of generating electricity including initial capital, return on investment, as well as the costs of continuous operation, fuel, and maintenance. The price is normally measured in units of local currency per unit of electricity, for example cents-per-kilowatt-hour for small numbers, or dollars-per-megawatt-hour for larger quantities.

While calculating costs, several internal cost factors have to be considered.[1] (Note the use of "costs," which is not the actual selling price, since this can be affected by a variety of factors such as subsidies on some energy and sources and taxes on others):

To evaluate the total cost of production of electricity, the streams of costs are converted to a net present value using the time value of money. These costs are all brought together using discounted cash flow here.[2] and here.[3]

Levelised energy cost (LEC, also commonly abbreviated as LCOE [10]) is the price at which electricity must be generated from a specific source to break even. It is an economic assessment of the cost of the energy-generating system including all the costs over its lifetime: initial investment, operations and maintenance, cost of fuel, cost of capital, and is very useful in calculating the costs of generation from different sources.[citation needed]

It can be defined in a single formula as:[11]

When comparing LECs for alternative systems, it is very important to define the boundaries of the 'system' and the costs that are included in it. For example, should transmissions lines and distribution systems be included in the cost? Typically only the costs of connecting the generating source into the transmission system is included as a cost of the generator. But in some cases wholesale upgrade of the Grid is needed. Careful thought has to be given to whether or not these costs should be included in the cost of power.

Another key issue is the decision about the value of the discount rate r. The value that is chosen for r can often 'weigh' the decision towards one option or another, so the basis for choosing the discount must clearly be carefully evaluated. See Internal rate of return. The discount rate depends on the cost of capital, including the balance between debt-financing and equity-financing, and an assessment of the financial risk.

US Department of Energy estimates

The tables below list the estimated cost of electricity by source for plants entering service in 2016. The tables are from a December 16, 2010 report of the Energy Information Administration (EIA) of the U.S. Department of Energy (DOE) called "Levelized Cost of New Generation Resources in the Annual Energy Outlook 2011".[12]

These calculations reflect an adjustment to account for the high level of carbon dioxide produced by coal plants. From the EIA report:

"a 3-percentage point increase in the cost of capital is added when evaluating investments in greenhouse gas (GHG) intensive technologies like coal-fired power and coal-to-liquids (CTL) plants without carbon control and sequestration (CCS). While the 3-percentage point adjustment is somewhat arbitrary, in levelized cost terms its impact is similar to that of a $15 per metric ton of carbon dioxide (CO2) emissions fee. ... As a result, the levelized capital costs of coal-fired plants without CCS are higher than would otherwise be expected."[12]

No tax credits or incentives are incorporated in the tables. From the EIA report (emphasis added):

"Levelized cost represents the present value of the total cost of building and operating a generating plant over an assumed financial life and duty cycle, converted to equal annual payments and expressed in terms of real dollars to remove the impact of inflation. Levelized cost reflects overnight capital cost, fuel cost, fixed and variable O&M cost, financing costs, and an assumed utilization rate for each plant type. The availability of various incentives including state or federal tax credits can also impact the calculation of levelized cost. The values shown in the tables below do not incorporate any such incentives."[12]

In March 2010, a new report on UK levelised generation costs was published by Parsons Brinckerhoff.[16] It puts a range on each cost due to various uncertainties. Combined cycle gas turbines without CO2 capture are not directly comparable to the other low carbon emission generation technologies in the PB study. The assumptions used in this study are given in the report, the report did not cover Solar power or include the New Nuclear's " hidden " government subsidies of 18 £/MWh to 67 £/MWh[citation needed] above the stated figures.

Divide the above figures by 10 to obtain the price in pence per kilowatt-hour "unit".

Price of oil per barrel (bbl) at which energy sources are competitive.

A draft report of LECs used by the California Energy Commission is available.[18] From this report, the price per MWh for a municipal energy source is shown here:

Note that the above figures incorporate tax breaks for the various forms of power plants. Subsidies range from 0% (for Coal) to 14% (for nuclear) to over 100% (for solar).

The following table gives a selection of LECs from two major government reports from Australia.[19][20] Note that these LECs do not include any cost for the greenhouse gas emissions (such as under carbon tax or emissions trading scenarios) associated with the different technologies. 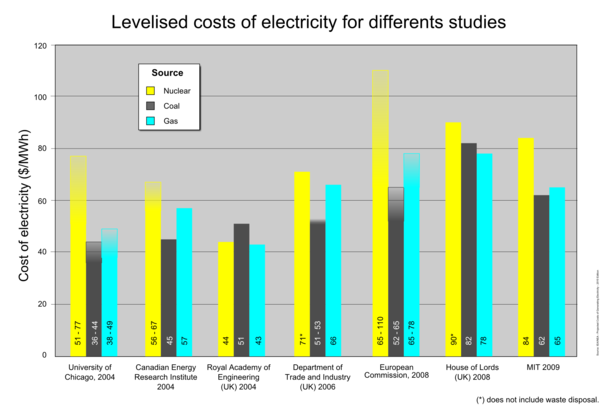 In 1997 the Trade Association for Wind Turbines (Wirtschaftsverband Windkraftwerke e.V. –WVW) ordered  a study into the costs of electricity production in newly constructed conventional power plants from the Rheinisch-Westfälischen Institute for Economic Research –RWI). The RWI predicted costs of electricity production per kWh for the basic load for the year 2010 as follows:[citation needed]

The WVW takes the legislative feed-in-tariff as basis for the costs of electricity production out of renewable energies because renewable power plants are economically feasible under the German law (German Renewable Energy Sources Act-EEG).

The following figures arise for the costs of electricity production in newly constructed power plants in 2010:[citation needed]

A 2010 study by the Japanese government, called the Energy White Paper, concluded the cost for kilowatt hour was ¥49 for solar, ¥10 to ¥14 for wind, and ¥5 or ¥6 for nuclear power. Masayoshi Son, an advocate for renewable energy, however, has pointed out that the government estimates for nuclear power did not include the costs for reprocessing the fuel or disaster insurance liability. Son estimated that if these costs were included, the cost of nuclear power was about the same as wind power.[21][22][23]

Beyond the power station terminals, or system costs

The raw costs developed from the above analysis are only part of the picture in planning and costing a large modern power grid. Other considerations are the temporal load profile, i.e. how load varies second to second, minute to minute, hour to hour, month to month. To meet the varying load, generally a mix of plant options is needed, and the overall cost of providing this load is then important. Wind power has poor capacity contribution, so during windless periods, some form of back up must be provided. All other forms of power generation also require back up, though to a lesser extent. To meet peak demand on a system, which only persist for a few hours per year, it is often worth using very cheap to build, but very expensive to operate plant - for example some large grids also use load shedding coupled with diesel generators [24] at peak or extreme conditions - the very high kWh production cost being justified by not having to build other more expensive capacity and a reduction in the otherwise continuous and inefficient use of spinning reserve.

In the case of wind energy, the additional costs in terms of increased back up and grid interconnection to allow for diversity of weather and load may be substantial. This is because wind stops blowing frequently even in large areas at once and for prolonged periods of time. Some wind advocates have argue that in the pan-European case back up costs are quite low, resulting in overall wind energy costs about the same as present day power.[25] However, such claim are generally considered too optimistic, except possibly for some marginal increases that, in particular circumstances, may take advantage of the existing infrastructure.

The cost in the UK of connecting new offshore wind in transmission terms, has been consistently put by Grid/DECC/Ofgem at £15billion by 2020. This £15b cost does not include the cost of any new connections to Europe - interconnectors, or a supergrid, as advocated by some. The £15b cost is the cost of connecting offshore wind farms by cables typically less than 12 km in length, to the UK's nearest suitable onshore connection point. There are total forecast onshore transmission costs of connecting various new UK generators by 2020, as incurred from 2010, of £4.7 billion, by comparison.

When a new plant is being added to a power system or grid, the effects are quite complex - for example, when wind energy is added to a grid, it has a marginal cost associated with production of about £20/MWh (most incurred as lumpy but running-related maintenance - gearbox and bearing failures, for instance, and the cost of associated downtime), and therefore will always offer cheaper power than fossil plant - this will tend to force the marginally most expensive plant off the system. A mid range fossil plant, if added, will only force off those plants that are marginally more expensive. Hence very complex modelling of whose systems is required to determine the likely costs in practice of a range of power generating plant options, or the effect of adding a given plant.

With the development of markets, it is extremely difficult for would-be investors to estimate the likely impacts and cost benefit of an investment in a new plant, hence in free market electricity systems, there tends to be an incipient shortage of capacity, due to the difficulties of investors accurately estimating returns, and the need to second guess what competitors might do.[citation needed]

Nuclear power plants built recently, or in the process of being built, have incurred many cost overruns. Those being built now are expected to incur further cost overruns due to design changes after the Fukushima Daiichi nuclear disaster.[26]

Nuclear power has in the past been granted indemnity from the burden of carrying full third party insurance liabilities in accordance with the Paris convention on nuclear third-party liability, the Brussels supplementary convention, and the Vienna convention on civil liability for nuclear damage.[27]

The limited insurance that is required does not cover the full cost of a major nuclear accident of the kind that occurred at Chernobyl or Fukushima. An April 2011 report by Versicherungsforen Leipzig, a Leipzig company that specializes in actuarial calculations shows that full insurance against nuclear disasters would increase the price of nuclear electricity by €0.14/kWh ($0.20/kWh) to €2.36/kWh ($3.40/kWh).[28][29][30][31][32][33]