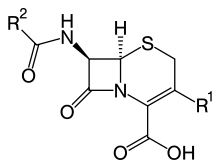 Core structure of the cephalosporins

Structure of the classical cephalosporins

/ˌsɛfəlɵˈspɔrɨn/) are a class of β-lactam antibiotics originally derived from Acremonium, which was previously known as "Cephalosporium".[1]

Together with cephamycins they constitute a subgroup of β-lactam antibiotics called cephems.

Cephalosporin compounds were first isolated from cultures of Cephalosporium acremonium from a sewer in Sardinia in 1948 by Italian scientist Giuseppe Brotzu.[2] He noticed that these cultures produced substances that were effective against Salmonella typhi, the cause of typhoid fever, which had beta-lactamase. Guy Newton and Edward Abraham at the Sir William Dunn School of Pathology at the University of Oxford isolated cephalosporin C. The cephalosporin nucleus, 7-aminocephalosporanic acid (7-ACA), was derived from cephalosporin C and proved to be analogous to the penicillin nucleus 6-aminopenicillanic acid (6-APA), but it was not sufficiently potent for clinical use. Modification of the 7-ACA side-chains resulted in the development of useful antibiotic agents, and the first agent cefalotin (cephalothin) was launched by Eli Lilly and Company in 1964.

The commonly quoted figure of 10% of patients with allergic hypersensitivity to penicillins and/or carbapenems also having cross-reactivity with cephalosporins originated from a 1975 study looking at the original cephalosporins,[3] and subsequent "safety first" policy meant this was widely quoted and assumed to apply to all members of the group.[4] Hence it was commonly stated that they are contraindicated in patients with a history of severe, immediate allergic reactions (urticaria, anaphylaxis, interstitial nephritis, etc.) to penicillins, carbapenems or cephalosporins.[5] This, however, should be viewed in the light of recent epidemiological work suggesting that, for many second-generation (or later) cephalosporins, the cross-reactivity rate with penicillin is much lower, having no significantly increased risk of reactivity in the studies examined.[4][6] The British National Formulary previously issued blanket warnings of 10% cross reactivity, but, since the September 2008 edition, suggests in the absence of suitable alternatives that oral cefixime or cefuroxime and injectable cefotaxime, ceftazidine, and ceftriaxone can be used with caution, but to avoid cefaclor, cefadrocil, cefalexin, and cefradine.[7]

Several cephalosporins are associated with hypoprothrombinemia and a disulfiram-like reaction with ethanol.[8][9] These include latamoxef, cefmenoxime, moxalactam, cefoperazone, cefamandole, cefmetazole, and cefotetan. This is thought to be due to the N-methylthiotetrazole (NMTT) side-chain of these cephalosporins, which blocks the enzyme vitamin K epoxide reductase (likely causing hypothrombinemia) and aldehyde dehydrogenase (causing alcohol intolerance).[10]

Some state that, although cephalosporins can be divided into five or even six generations, the usefulness of this organization system is of limited clinical relevance.[11]

Fourth-generation Cephalosporins as of March, 2007 were considered to be "a class of highly potent antibiotics that are among medicine's last defenses against several serious human infections" according to the Washington Post.[12]