Dosa
For the term as used in Ayurveda, see Dosha.

Dosa or Dhosai(Kannada: ದೋಸೆ, Malayalam: ദോശ, Tamil: தோசை, Telugu: దోసె, Tulu: ದೋಸೆ) is a fermented crepe or pancake made from rice batter and black lentils.[1] It is indigenous to and is a staple dish in the southern Indian states of Andhra Pradesh, Karnataka, Kerala, and Tamil Nadu, as well as being popular in Sri Lanka. Dosa is also popular in Malaysia[2] and Singapore,[3] where the name Thosai is more common,[4] and in Myanmar as Toshay.

The origins of Dosa have been widely discussed in literature and books. A few of them are listed below:

It is a common breakfast dish,[13] and street food.[14] The dosa is rich in carbohydrates, contains no salt, sugar or saturated fats and its constituent ingredients of rice and lentils mean that it is gluten-free and contains protein.[13][15] The fermentation process increases the vitamin B and vitamin C content.[16][17] There are also instant mix products for making dosa, with somewhat lower nutritional benefits.[18]

The street food variants may contain contaminants or otherwise undesirable additions, such as relatively high levels of copper.[19]

Rice is ground finely to form a batter. Rice can be uncooked or parboiled. The mixture of urad dal (black lentils) and rice can be replaced with highly refined wheat flour to make a maida dosa or semolina for a rava dosa.

A thin layer of the batter is then ladled onto a hot tava (griddle) greased with oil or ghee (clarified butter). It is spread out evenly with the base of a ladle or bowl to form a pancake. It is flipped to heat both crusts and removed from the griddle when the crust becomes dry. Dosa are served hot, either folded in half or rolled like a wrap.

Dosa can be stuffed with fillings of vegetables and sauces to make a quick meal. They are typically served with a vegetarian side dish which varies according to regional and personal preferences. Common side items are:

Though dosa typically refers to the version made with rice and lentils, many other versions exist, often specific to an Indian region. Some variations include Egg dosa, which is spread with an omelette, and cheese dosa, which is stuffed with cheese. 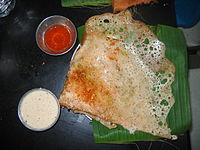 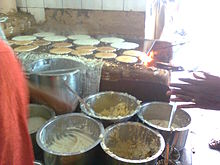 A view of making Benne Dose at Davangere 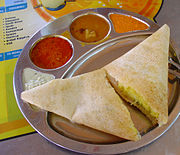 A masala dosa is made by stuffing a dosa with a lightly cooked filling of potatoes, fried onions and spices. It wraps the dosa around an onion and potato curry or sabji.[clarification needed] It is listed at number 49 on World's 50 most delicious foods complied by CNN Go in 2011.[20]

Before it was invented, plain dosa was served with potato curry (batata bhaji) without onions in a separate cup. During a shortage of potatoes,[citation needed] a method was created in which potato was mashed and sautéed with onions together with other spices. This was then placed inside the dosa instead of in a separate cup in order to hide the onions, which are not eaten by orthodox Hindus and Jains.[citation needed] This came to be known as "Masala dosa", from the sautéeing of spices (masala) during the preparation of the bhaji.[citation needed]

In Bangalore, the masala dosa is usually served with a red chutney applied to its inside surface. The red chutney usually has generous amounts of garlic,

Preparation of a plain dosa