Taqiyah (cap)
For teaching on concealment in some Islamic sects, see Taqiyya. 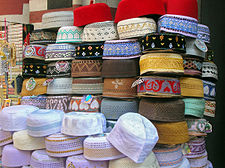 The taqiyah (also spelt "tagiyah"; Arabic: طاقية‎ / ALA-LC: ṭāqīyah) is a short, rounded cap worn by some observant Muslim men. When worn by itself, the taqiyah can be any color. When worn under the keffiyah scarf, it is always white. Some Muslims wrap the turban around the cap. The turban is called an imama in Arabic. A hadith in the books of Abu Dawud and Tirmidhi quotes Prophet Muhammad as saying, "The distinction between us and the polytheists is the turbans over our caps." Today the taqiyah still serves, amongst other things, as a form of religious uniform, to identify oneself to the rest of the world as somebody who adheres to Islam.

In the United States and Britain, many Muslim merchants sell the prayer cap under the name kufi.

Muslims wear the taqiyah to emulate Muhammad. The companions of Muhammad were never seen without their heads being covered. In order to emulate their actions, Muslims throughout the world wear a variety of taqiyat, fez hats, and other headgear. Another goal of wearing a taqiyah is to be more like Muhammad and therefore obey and follow his tradition.

The taqiyah is actually a tradition from antiquity; pre-Islamic Arabs had the habit of always wearing something on their heads. They considered it inappropriate not to wear headgear like the keffiyeh, see Sartorial hijab for further information.

Despite its religious associations, the taqiyah is actually a practical item of clothing in the desert climates to which Islam is native: despite the hot daytime temperatures, the night in Arabia and in much of the Muslim world is quite cold, and wearing a head covering to bed reduces heat loss by a substantial amount.

The taqiyah is also called a prayer cap in English. Many Muslims wear the taqiyah during Jumu'ah, or Friday prayers at the mosque, and during daily salat, or prayers at home. For men, it is mustahabb, which means "praise worthy" or "seeking the love of God", to cover the head during prayer. Some Muslims use a prayer mat during salat. It is common for men to wear a taqiyah during weddings (see Nikah).

Taqiyah is the Arabic word for a Muslim cap used in Saudi Arabia. In Pakistan and India, the prayer cap is called a topi. Topi means cap in the Urdu language. In Pakistan, men usually wear the topi with salwar kameez. In the United States and Britain, many Muslim merchants sell the prayer cap under the name kufi.

There are a wide variety of Muslims caps seen around the world. Each country or region will usually have a unique cap.

Men wear a wool beret called a pakol. The regular cotton prayer cap is also called a pakol. Pakol means taqiyah in the Pashto language, see Pashtun people. Salwar kameez is the traditional men's attire in Afghanistan. However, among rebab players, the collarless shirt and pants called, payraan tumbaan or peran and tunban is popular. The Karakul (hat) is common. In Afghanistan, women wear the burqa. 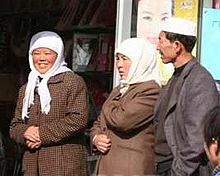 A Hui man in China wearing a Taqiyah.

Men wear a white prayer cap with traditional Chinese clothing including the Chinese suit and a robe called a changshan, see Islam in China. In the United States, the Chinese robe is sold as a men's cheongsam. For formal wear, the robe is made of silk , because silk is the traditional Chinese fabric. The rule of men not wearing silk for Muslims is ignored in China, because in China silk clothings are unisex while in the Arab world it is a feminene fabric.Cotton robes and kung fu suits are worn to jumu'ah. In China, the Hui people developed Muslim Chinese martial arts. Recently, the Chinese government has adopted the Tangzhuang as the national costume for men.

Men wear the songkok. Traditional Malaysian men's attire consists of a shirt, matching pants, and waist wrap that is called a Baju melayu. For informal events, and prayers at the mosque, the sarong is worn. However, a person seen wearing a songkok in Malaysia, especially in a Dewan Undangan Negeri, is not necessarily a Muslim. This is because non-Muslims are required to wear one to comply with the dressing code of the assembly. Taqiyah is known as kopiah‎ in Malaysia.

The Sindhi topi, a popular cap in Pakistan.

The prayer cap is called a topi, see Topi cap. The traditional men's attire is called a salwar kameez. The sherwani is formal wear. Pakistani men wear a variety of other caps including the Sindhi topi, a mirrored cap with a front opening that allows the wearer to place the forehead on the ground during prayer, see Sindhi cap. Other caps include the karakul (hat), fez (hat), and pakol. Women's clothing is salwar kameez, kaftan, and gharara. Western dressing is popular among young urban men and women. Saris are also popular among the older generation of Muslims who immigrated from India during Partition of 1947.

Muslim men wear the tubeteika. In Russia, the tubeteika is worn with a suit for Eid ul Fitr or Jumu'ah, and a tuxedo for wedding ceremonies. Russian Muslims also wear the doppa or rug cap. In Russia, giving a rug cap to a person as a gift is a sign of friendship. The Russian name for the doppa is tubeteika. In Russia, the folk costume consists of a kosovorotka for men and a sarafan for women. Among Turkic peoples, traditional Turkic costumes are worn. Russian Muslims wear a variety of fur hats including the karakul (hat), which is called an astrakhan hat in Russia, the ushanka, and the papakhi, see Islam in Russia. A Russian diplomat hat, which is a boat shaped cossack hat, is also worn. Nikita Khrushchev is said to have popularized it.

Men in Somalia often wear the koofiyad cotton prayer cap, with a sarong referred to as a macawiis. The jalabiya is also sometimes worn.[1]

The prayer cap is worn under a white turban called an 'Imama'. Sudanese men wear the white turban with a white thobe called a jalabiyyah, see Islam in Sudan and Culture of Sudan. In the United States, the Sudanese robe is sold as an African dishdasha, Sudani, or Sudanese thobe.

Men used to wear the fez hat and calpack, or a taj, a conical taqiyah. The Turkish cap is also common. The Turkish cap is similar to a beanie or tuque. The Turkish cap is made of wool or cotton fleece and has a distinctive pom-pom or toorie on top. Turkish people also wear regular cotton prayer caps. Women wear a variety of folk dresses with a vest called a jelick and a veil called a yashmak. The traditional wedding dress is red. Men wear the folk costume to festivals and prayers, but most men wear a suit or tuxedo for weddings. Dervishes have a unique costume. 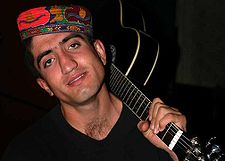 The doppa is most common. In the United States, the doppa is sold as an Uzbek kufi, Bukharan kippah, Bucharian, or Bokharan yarmulke (Bukharian Jews of Central Asia also wore headcoverings similar to the Doppi/Tubeteika design but wore it for religious reasons pertaining to Judaism). The doppa is also called the rug cap because the needle work is the same as that found on Uzbek oriental rugs, see Uzbek people. In Central Asia, men wear the doppa with a suit. Uzbeks also wear the tubeteika, which they call a duppi. The traditional tubeteika is a black velvet cap with white or silver embroidery. For festivals, a folk costume is worn that consists of a robe called a khalat. The khalat is often worn with a coat called a chapan. Tajiks wear the rug cap and the tubeteika. In Canada, Neil Peart, the drummer for Rush, wears a tubeteika.

The Bosniaks wear the cotton prayer cap, the black beret, and the fez hat, see Islam in Bosnia and Herzegovina. During Eid ul Fitr, the prayer cap is worn with a suit. For wedding ceremonies, a tuxedo is worn. 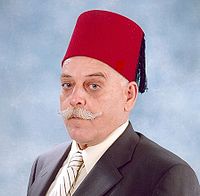 The fez hat, the tarboush or chechia is worn. In Morocco, men wear the djellaba with their fez hats. The short sleeved robe is the gandora. Moroccan women wear a dress called a takshita. In Egypt, the galabeya is worn.

The kofia is commonly worn in the Muslim communities in the coastal areas of Kenya, Tanzania, and Uganda. Some Swahili speaking populations that are Muslim wear the kofia with a white robe called a kanzu in the Swahili language. In the United States, the kanzu is sold as an Omani thobe, Emirati thobe, or Yemini dishdasha. A white kanzu and suit jacket or blazer is the formal wear of Swahili peoples. 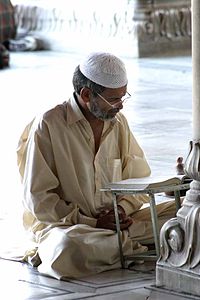 A man wearing a crochet taqiyah and kurta in Pakistan

As more Muslims have immigrated to the West from traditional Islamic cultures, Christians have converted to Islam, see List of converts to Islam. Most converts use the West African name, kufi, when speaking of a Muslim prayer cap. Two approaches to clothing are seen. The first approach is to add the prayer cap to the traditional clothing of the ethnic group the revert was born into. The general rule is that a convert may wear any modest clothing that exists in their culture, plus the taqiyah or the hijab.

The second approach is the Sunnah clothes approach. For a man, the taqiyah, thawb, and salwar kameez are the sunnah clothes. For non-formal events such as Friday prayer services, and Eid ul Fitr celebrations, men wear the taqiyah with a thawb or salwar kameez in a variety of colors. The groom wears a white thawb or salwar kameez during wedding ceremonies. The bride's clothing is a white wedding dress. Most brides wear a white veil with the wedding dress, see white wedding. However, a few wear a white hijab or a white hooded bridal cape or full length cloak.