Sindhi people
This article is about the socio-ethnic group of South Asia. For other uses, see Sindhi.

Sindhis (Sindhi Arabic script: Sindhi: سنڌي, , Sindhi Devanagari script: सिन्धी, Sindhī) are a Sindhi speaking socio-ethnic group of people originating from Sindh, a province of Pakistan. Today Sindhis that live in Pakistan belong to various religious denominations including Islam, Zoroastrianism, Hinduism, Sikhism and Christianity. After the Partition of India into two dominion countries in 1947 i.e. India and Pakistan, a large number of Muslim immigrants (Muhajirs) shifted to Pakistan and settled in Sindh region like other regions of Pakistan. At the same time Sindhi Hindus migrated to India in large numbers and have settled in many parts of the world. 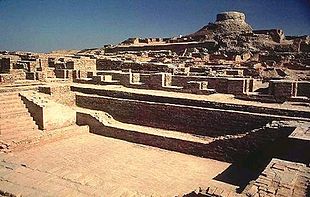 The original inhabitants of ancient Sindh were believed to be aboriginal tribes speaking languages of the Indus Valley civilization around 3000 BC. 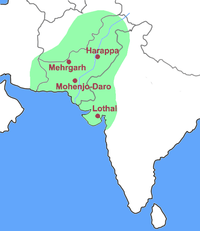 Location of the Indus Valley civilization

The Indus Valley Civilization went into decline around the year 1700 BC for reasons that are not entirely known, though its downfall was probably precipitated by a massive earthquake that dried up the Ghaggar River. This decline coincided with the arrival of Aryan tribes from Central Asia. The Indo-Aryans are believed to have founded the Vedic civilization that existed between the Sarasvati River and Ganges river around 1500 BC. This civilization helped shape subsequent cultures in South Asia.

In his book Kitab-ul-Hind, the Persian scholar Abū Rayhān Bīrūnī (Al-Beruni) declared that even before the advent of Islam into Sindh (711 A.D.), the Sindhi language was prevalent in Sindh.[citation needed]

Because of its location at the western edge of South Asia, Sindh was one of the earliest regions to be influenced by Islam. It was part of the Islamic empires of the Abbasids and Umayyids. Sufi missionaries played a pivotal role in converting millions of native Sindhis to Islam. At the same time, Muslim technocrats, bureaucrats, soldiers, traders, scientists, architects, teachers, theologians and Sufis flocked from the rest of the Muslim world to the Islamic Sultanate in Sindh. Settled by Turks, Pashtuns, and Mughals. Habbari, Soomra, Samma, Arghun dynasties ruled Sindh. The Baloch tribes migrated and settled in Sindh. These Baloch assimilated with Sindhis and now they constitute a significant population of Sindh. Sindh continued to evolve as a frontier state; by the time of British colonial occupation it was ruled by Baloch kings. 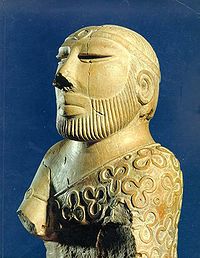 "The Priest King Wearing Sindhi Ajruk", c.2500 BC, in the National Museum of Pakistan.

Sindh, as a western frontier of the South Asia, has always been exposed to the entry of migrants from Central Asia and the Middle East. The region got it's name sindh from the river sindhu (Indus) and the people living here are called as sindhi since the time of indus valley civilization this region is called as sindh and the people as sindhi, the term hindi and hindu is derived from word sindh and sindhi as the ancient persians pronunciate "s" as "h" eg. sarasvati as harasvati, the same way they called the people of this region as hindi people their language as hindi language and the region as hind, the name which is used for this region since ancient times and later for whole northern part of indian sub-continent even today india is also known as hindustan the name which has nothing to do with hinduism, but related more to a people and their language named after the main river flowing through this region sindhu (Indus).

As regards the composition of the non-ethnic Sindhi population, the two main groups that inhabited Sindh are related to, and common, one with the Punjab and another with Balochistan. The majority group is that of Rajputs and Jats who are the partial descendants of Sakas, Kushans and Huns. During Kalhora rule a number of Jat tribes such as the Sials, Joyas and Khawars came from the Punjab and settled in Sindh. They are called the Seraiki (i.e., people from the north), and speak Seraiki. This group overlaps and is sometimes considered transitional between the Punjabis and Sindhi people.

The two main Rajput tribes of Sindh are: the Samma, descendants of the Samma Dynasty who ruled Sindh during (1351 - 1521 A.D.); and the Soomra, descendants of the Soomra Dynasty who ruled Sindh during (750 - 1350 A.D.). Among other Sindhi Rajputs are the Bhachos, Bhuttos, Bhattis, Buriros, Lakha, Sahetas, Lohanas, Mohano, Dahars, Indhar, Chachar, Dhareja, Rathores, Dakhan, Langah, etc. The Sindhi-Sipahi of Rajasthan and the Sandhai Muslims of Gujarat are communities of Sindhi Rajputs settled in India. Closely related to the Sindhi Rajputs are the Jats of Sindh, who are found mainly in the Indus delta region.

The other Main group is that of Balochi tribes settled in various parts of Sindh mostly during the last five hundred years or so. Since they were martial people and ruled over Sindh for some time before the arrival of the British, they acquired vast lands in the province, with the result that a large number of present-day Sindhi landlords are of Baloch origin. According to the 1941 census, which was the last one held before independence, Balochis formed 60% of the total population of Sindh. Balochi tribes are spread over,Iranian Sistan Balochistan, Afghani Balochistan, Kurdistan of Iraq, Balochistan, Sindh and the south-western districts of the Punjab. This group is almost entirely Muslim.

A third sub-group of the Sindhi population comprises the descendants of Muslim conquerors, administrators and missionaries who were Arabs, Persians, Afghans and Turks (including the Mughals). They are a small minority settled in cities and towns and have largely blended with the other components of the population while maintaining something of a sub-culture; they are often referred to as Ashraf or the "noble". Of this third element, Muslim Arabs have possibly contributed the most to the development of the modern Sindhi language and literature and to the advancement of its intellectual and cultural activities.

Another group of people who are largely overlooked in any discussions about groups and culture of Sindh are the Haris, whose name is derived from the term "Harijan."[4] These people are generally believed to be the descendants of indigenous Dravidian populations that were enslaved by various invading people. Many are still living in abject poverty and under slave-like conditions in rural Sindh, because of the benign neglect and only nominal efforts by the government to improve the situation. The majority of Haris are Muslims, while some are nominally Hindus. Many Muslim Haris have moved on as artisans and wage laborers.

Nearly 14 million Muslim refugees (Muhajirs) escaped from communal riots and genocide in various parts of India and settled in Sindh after the independence of Pakistan, populating mostly urban centers of the province. They spoke Urdu, Gujarati, Bengali as well as other languages that reflect their different regions of origin.[5]

With Sindh’s stable prosperity and its strategic geographical possession, it is not surprising that it was subject to successive conquests by foreign empires. In 712 A.D., Sindh was incorporated into the Arab empire and became the ‘Arabian gateway’ into India (later to become known as Bab-ul-Islam, the gate of Islam). After the conquest by the Arabs, the people of Sindh were influenced by Islam.[6]

Sindhi culture is also highly Persianized as Sindh was exposed to cultural, religious and linguistic influence from Islamic Persia. Most significantly, numerous Persian loanwords made their way into the Sindhi language along with the Nastaʿlīq script, in which modern Sindhi is written today.

Muslim Sindhis tend to follow the Sunni Hanafi fiqh with a substantial minority of Shia Ithna 'ashariyah. The Sufism has made a deep impact on Sindhi Muslims and Sufi shrines dot the landscape of Sindh.

However, Sindh is also home to the Hindus. Hindus being the indegenious people of this land.

Hindus in Sindh were concentrated in the cities before the partition of India in 1947. According to Ahmad Hassan Dani

Muslim Sindhis tend to have traditional Muslim first names, sometimes with localized variations. Most Sindhis have tribal and clan names as their surnames. Nearly forty percent of Sindhis have Baloch tribal names.

Hindu Sindhis tend to have surnames that end in '-ani' (a variant of 'anshi', derived from the Sanskrit word 'ansh', which means 'descended from'). The first part of a Sindhi Hindu surname is usually derived from the name of an ancestor. In northern Sindh, surnames ending in 'ja' (meaning 'of') are also common. A person's surname would consist of the name of his or her native village, followed by 'ja'.

Sindhi culture has been strongly influenced by Sufism. Jhulelal, the Sufi pioneer of Sindh, is revered by both Hindus and Muslims. A common greeting among Sindhis "Jhulelal Bera-Hee-Paar".[9]

Shah Abdul Latif Bhittai (1689–1752) was a Sufi scholar and saint, and is considered one of the greatest poets of the Sindhi language. Bhittai settled in the town of Bhit Shah in Matiari, Pakistan where his shrine is located. Shah Abdul Latif Bhittai's most famous written work is the Shah Jo Risalo, which is a masterpiece of Sindhi literature as well. The major themes of his poetry include Unity of God, love for Prophet, religious tolerance and humanistic values. Islamic philosopher Seyyed Hossein Nasr describes Bhittai's works as "direct emanations of Rūmī's spirituality in the Indian world."[10]