The Isra and Mi'raj (Arabic: الإسراء والمعراج‎, al-’Isrā’ wal-Mi‘rāğ), are the two parts of a Night Journey that, according to Islamic tradition, the Islamic prophet Muhammad took during a single night around the year 621. It has been described as both a physical and spiritual journey.[1] A brief sketch of the story is in sura (chapter) 17 Al-Isra of the Qur'an,[2] and other details come from the Hadith, supplemental writings about the life of Muhammad. In the journey, Muhammad travels on the steed Buraq to "the farthest mosque" where he leads other prophets in prayer. He then ascends to heaven where he speaks to God, who gives Muhammad instructions to take back to the faithful on Earth about the number of times to offer prayers each day.

According to traditions, the Journey is associated with the Lailat al Miraj, as one of the most significant events in the Islamic calendar.[3] 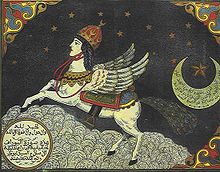 Al-Buraq seen on a reproduction of a 17th century Indian Mughal miniature.

The Isra begins with Muhammad praying in the Kaaba in Mecca, when the archangel Jibral (Gabriel) comes to him, and brings him the steed Buraq, the traditional heavenly steed of the prophets. Buraq carries Muhammad to the Masjid Al Aqsa the "Farthest Mosque", which some Muslims believe is the Al Aqsa mosque in Jerusalem. Muhammad alights, tethers Buraq to the Western Wall and leads other prophets including Adem (Adam), Musa (Moses), and `Īsā (Jesus) in prayer. In the second part of the journey, the Mi'raj (an Arabic word that literally means “ladder”[4]), Buraq takes him to the heavens, where he tours the circles of heaven, and speaks with the earlier prophets such as Abraham, Moses, and Jesus. He is then taken by the angel Jibril to meet God. According to Islamic tradition, God instructs Muhammad that Muslims must pray fifty times per day; however, Moses tells Muhammad that it is very difficult for the people and urges Muhammad to ask for a reduction, until finally it is reduced to five times per day.[3][5][6][7][8]

The place referred to in the Qu'ran as "the farthest mosque"[2] (Arabic: المسجد الأقصى‎, al-Masğidu 'l-’Aqṣà), from Al-Isra, has been historically considered as referring to the site of the modern-day Al Aqsa Mosque in Jerusalem. This interpretation was advanced even by the earliest biographer of Muhammad—Ibn Ishaq—and is supported by numerous aḥādīth. The term used for mosque, "masjid", literally means "place of prostration", and includes monotheistic places of worship but does not exclusively lend itself to physical structures but a location, as the prophet Muhammad stated 'the earth has been made a masjid for me and my followers...' (bukhari volume 1, Book 7, Number 331). When Caliph Umar conquered Jerusalem after Muhammad's death, a prayer house was built on the site. The structure was expanded by the Ummayad caliph Abd al-Malik ibn Marwan and finished by his son al-Walid in 705 CE. The building was repeatedly destroyed by earthquakes and rebuilt, until the reconstruction in 1033 by the Fatimid caliph Ali az-Zahir, and that version of the structure is what can be seen in the present day.

Many Western historians, such as Heribert Busse[9] and Neal Robinson,[10] agree that Jerusalem is the originally intended interpretation of the Qu'ran. Muslims used to pray towards Jerusalem, but Muhammad changed this direction, the Qibla, to instead direct Muslims to face towards the Kaaba in Mecca on the basis of having received divine intervention.

The Lailat al Miraj (Arabic: لیلة المعراج‎, Lailätu 'l-Mi‘rāğ), also known as Shab-e-Miraj (Persian: شب معراج, Šab-e Mi'râj) in Iran, Pakistan, India and Bangladesh, and Miraç Kandili in Turkish, is the Muslim festival celebrating the Isra and Mi'raj. Some Muslims celebrate this event by offering optional prayers during this night, and in some Muslim countries, by illuminating cities with electric lights and candles. The celebrations around this day tend to focus on children and the young. Children are gathered into a mosque and are told the story of the Isra and Mi'raj. The story focuses on how Muhammad's heart was purified by an archangel (Gabriel) who filled him with knowledge and faith in preparation to enter the seven levels of heaven. After prayer (Salah, where the children can pray with the adults if they wish) food and treats are served.[3][11][12] Esoteric interpretations of Islam emphasise the spiritual significance of Mi'raj, seeing it as a symbol of the soul's journey and the potential of humans to rise above the comforts of material life through prayer, piety and discipline.[4]

The exact date of the Journey is not clear, but is celebrated as though it took place before the Hijra and after Muhammad's visit to the people of Ta’if. It is considered by some to have happened just over a year before the Hijra, on the 27th of Rajab; but this date is not always recognized. This date would correspond to the Julian date of February 26, 621, or, if from the previous year, March 8, 620. In Shi'a Iran for example, Rajab 27 is the day of Muhammad's first calling or Mab'as.

The event of Isra and Mi'raj are referred to briefly in the Qur'an. For greater detail, they have been discussed in supplemental traditions to the Qur'an, known as hadith literature. Within the Qur'an itself, there are two verses in chapter 17, which has been named after the Isra, and is called "Chapter Isra" or "Sura Al-Isra". There is also some information in Sura An-Najm, which some scholars say is related to the Isra and Mi'raj.[13]

Of the supplemental writings, hadith, two of the best known are by Anas ibn Malik, who would have been a young boy at the time of Muhammad's journey.

Glory to (Allah) Who did take His servant for a Journey by night from the Sacred Mosque to the farthest Mosque, whose precincts We did bless,- in order that We might show him some of Our Signs: for He is the One Who heareth and seeth (all things).
—Qur'an, Sura 17 (Al-Isra) ayah 1[2]

Behold! We told thee that thy Lord doth encompass mankind round about: We granted the vision which We showed thee, but as a trial for men,- as also the Cursed Tree (mentioned) in the Qur'an: We put terror (and warning) into them, but it only increases their inordinate transgression!
—Qur'an, Sura 17 (Al-Isra) ayah 60[14]

For indeed he saw him at a second descent,
Near the Lote-tree beyond which none may pass:
Near it is the Garden of Abode.
Behold, the Lote-tree was shrouded (in mystery unspeakable!)
(His) sight never swerved, nor did it go wrong!
For truly did he see, of the Signs of his Lord, the Greatest!
—Qur'an, Sura 53 An-Najm, ayat 13-18[13]

Narrated Jabir bin 'Abdullah: That he heard Allah's Apostle saying, "When the people of Quraish did not believe me (i.e. the story of my Night Journey),
I stood up in Al-Hijr and Allah displayed Jerusalem in front of me, and I began describing it to them while I was looking at it."
—Collected by Muhammad al-Bukhari, Sahih al-Bukhari, Volume 5, Book 58, Number 226[15]