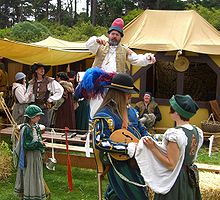 Village Feast.--Fac-simile of a Woodcut of the "Sandrin ou Verd Galant," facetious Work of the End of the Sixteenth Century (edition of 1609).

A festival or gala' is an event, usually and ordinarily staged by a local community, which centers on and celebrates some unique aspect of that community and the Festival.

Among many religions, a feast is a set of celebrations in honour of God or gods. A feast and a festival are historically interchangeable. However, the term "feast" has also entered common secular parlance as a synonym for any large or elaborate meal. When used as in the meaning of a festival, most often refers to a religious festival rather than a film or art festival.

The word fest derives from the Middle English, from Middle French word festivus, from the Latin word festivus. Festival was first recorded as a noun in 1589. Before it had been used as an adjective from the fourteenth century, meaning to celebrate a church holiday. The etymology of feast is very similar to that of festival. The word "feste" (one letter different from "fest") comes from Middle English, from Middle French, from the Latin word festa. Feast first came into usage as a noun circa 1200, and feast was used as a verb circa 1300.[1] A festival is a special occasion of feasting or celebration, that is usually religious. There can be many different types of festival, like Halloween and Christmas.

Festivals, of many types, serve to meet specific needs, as well as to provide entertainment. These times of celebration offer a sense of belonging for religious, social, or geographical groups. Modern festivals that focus on cultural or ethnic topics seek to inform members of their traditions. In past times, festivals were times when the elderly shared stories and transferred certain knowledge to the next generation. Historic feasts often provided a means for unity among families and for people to find mates. Select anniversaries have annual festivals to commemorate previous significant occurrences.

There are numerous types of festivals in the world. Though many have religious origins, others involve seasonal change or have some cultural significance.[2] Also, certain institutions celebrate their own festival (often called "fests") to mark some significant occasions in their history. These occasions could be the day these institutions were founded or any other event which they decide to commemorate periodically, usually annually. 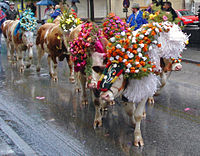 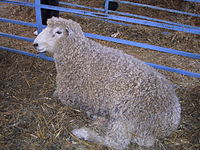 Ewe on display at the Maryland Sheep and Wool Festival 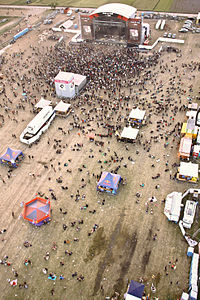 Seasonal festivals are determined by the solar and the lunar calendars and by the cycle of the seasons. The changing of the season was celebrated because of its effect on food supply. Ancient Egyptians would celebrate the seasonal inundation caused by the Nile River, a form of irrigation, which provided fertile land for crops. In the Alps, in autumn the return of the cattle from the mountain pastures to the stables in the valley is celebrated as Almabtrieb. A recognized winter festival, the Chinese New Year, is set by the lunar calendar, and celebrated from the day of the second new moon after the winter solstice. An important type of seasonal festivals are those related with the agricultural seasons. Dree Festival of the Apatanis living in Lower Subansiri District of Arunachal Pradesh is one such important festival, which is celebrated every year from July 4 to 7 praying for bumper crop harvest.

Most Ancient Egyptian festivals were religious, but others were not such as one festival established by Rameses III to celebrate his victory over the Libyans. When feasts occurred, they were either determined by lunar cycles or the Egyptian calendar. Festivals were large celebrations with plenty of food available. In one festival in the 12th century BC, 11,341 loaves of bread and 385 jars of beer were given to the public. The Sed festival celebrated the thirtieth year of a pharaoh's rule and then every three (or four in one case) years after that. Iranian traditional festivals: Mehregan festival, Norooz or nuroz festival, qadir festival, Chahar shanbehesori festival. Islamic festivals: EId-ul-Adha festival (biggest Islamic festival) and Id-ul-Fiter festival is another Islamic festival (second-biggest).