Roundabouts (or carousels) are traditional attractions, often seen at fairs. This one was photographed at the famous Nottingham Goose Fair, England, in 1983

A fair or fayre (common British spelling) is a gathering of people to display or trade produce or other goods, to parade or display animals and often to enjoy associated carnival or funfair entertainment. It is normally of the essence of a fair that it is temporary; some last only an afternoon while others may ten weeks. Activities at fairs vary widely. Some trade fairs are important regular business events where either products are traded between businesspeople, as at the Frankfurt Book Fair, where publishers sell book rights in other markets to other publishers, or where products are showcased to largely consumer attendees, as for example in agricultural districts where they present opportunities to display and demonstrate the latest machinery on the market to farmers.

Fairs are also known by many different names around the world, such as agricultural show, fête, county fair, exhibition or state fair, festival, market and show. Flea markets and auto shows are sometimes incorporated into a fair. 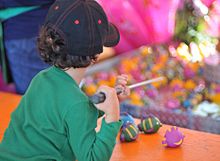 A boy at the fish pond, the Rockton World's Fair, harvest festival, Canada, 2010

Fayre is an archaic spelling of fair, used mostly from the 15th to the 17th century. This spelling is now confusingly used for both fair and fare, the latter in the sense of 'food and drink'. In itself, the word means a gathering of stalls and amusements for public entertainment. The alternate spelling is an old-fashioned affectation and is used in order to remind revellers and participants of medieval fayres and markets. It is mainly used for fairs that are essentially leisure rather than business events like trade fairs. 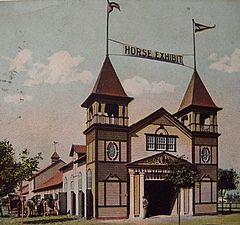 The Horse Exhibit Hall at The Great Allentown Fair, Allentown, Pennsylvania, in the early 1900s.

The fair is an ancient tradition, and many communities have long had dedicated fairgrounds; others hold them in a variety of public places, including streets and town squares, or even in large private gardens. Fairs are often held in conjunction with a significant event, such as the anniversary of a local historical event, a seasonal event such as harvest time, or with a holiday such as Christmas.

In Roman times, fairs were holidays on which there was an intermission of labour and pleadings. In the Middle Ages many fairs developed as temporary markets, and were especially important for long-distance and international trade, as wholesale traders travelled, sometimes for many days, for pre-arranged fairs where they could be sure to meet those they needed to buy from or sell to. They were usually tied to a special Christian religious occasion (particularly the anniversary dedication of a church). Tradesmen would bring and sell their wares, even in the churchyards. Such fairs might then continue annually, usually on the feast day of the patron saint to whom the church was dedicated. This custom was kept up until the reign of Henry VI, by which time there were a great many fairs kept on these patronal festivals, for example at Westminster on St. Peter's day, at Smithfield on St. Bartholomew's (the famous Bartholomew Fair, celebrated in Ben Jonson's play of the same name) and at Durham on St. Cuthbert's day. The Kumbh Mela, held every twelve years, at Allahabad, Haridwar, Nashik and Ujjain is one of the largest fairs in India, where over 60 million people gathered in January 2001, making it the largest gathering anywhere in the world.[1][2][3] In the United States, fairs draw in as many as 150 million people each summer.[4] One example of the American county fair being featured in a famous piece of literature is in E. B. White's Charlotte's Web.[4] Children's competitions at an American fair range from breeding small animals to robotics, while the organization 4-H has become a traditional association.[4]

Because of the great numbers of people attracted by fairs they were often the scenes of riots and disturbances, so the privilege of holding a fair was granted by royal charter. At first they were only allowed in towns and places of strength, or where there was some bishop, sheriff or governor who could keep order. In time, various benefits became attached to certain fairs, such as granting people the protection of a holiday, and allowing them freedom from arrests in certain circumstances. The officials were authorised to do justice to those that came to their fair; eventually even the smallest fair would have had a court to adjudicate on offences and disputes arising within the fairground, which was called a pye powder court (from Old French pieds pouldrés, literally "dusty feet", meaning an itinerant trader, from Medieval Latin pedes pulverosi).

Fairs go long into the night, and use lights to attract people 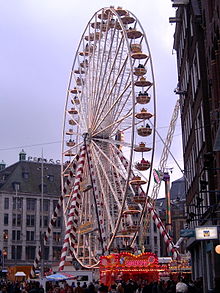 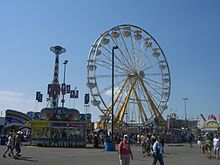 Some fairs were free; others charged tolls and impositions. At free fairs, traders, whether natives of the kingdom or foreigners, were allowed to enter the kingdom, and were under royal protection while travelling to and returning from the fair. The traders, their agents, and their goods were exempt from all duties and impositions, tolls and servitudes; merchants going to or coming from the fair could not be arrested, or have their goods stopped.

Such fairs (especially those of the Mediterranean region and some inland regions, particularly Germany), were extremely important in the commerce of Europe. The most famous were those of: