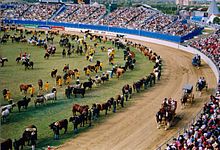 An agricultural show is a public event showcasing the equipment, animals, sports and recreation associated with agriculture and animal husbandry. The largest comprise a livestock show (a judged event or display in which breeding stock is exhibited), a trade fair, competitions, and entertainment. The work and practices of farmers, animal fanciers, cowboys and zoologists may be displayed. The terms agricultural show and livestock show are synonymous with the North American term county fair or state fair.

Agricultural shows are an important part of cultural life in small country towns, and popular event in larger towns and cities. Shows range from small events in small country towns usually lasting two days, through medium-sized events of three days, to large Royal Shows, which may run for up to two weeks and combine elements of an amusement park with those of an agricultural show. Although increasingly under pressure due to finances and insurance concerns, all main towns in the United Kingdom have a Show Society and in some areas, several towns and villages in the area all have an annual show. Larger shows often include live entertainment and fireworks in the main arena. 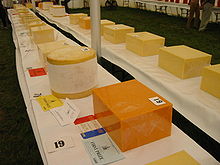 Competitions commonly included in shows include:

Border Leicesters lined up for the judge

A livestock show is an event where livestock are exhibited and judged on certain phenotypical breed traits as specified by their respective breed standard. Species of livestock that may be shown include pigs, cattle, sheep, goats, horses, llamas and alpacas.[1] Poultry such as chickens, geese, ducks, turkeys and pigeons are also shown competitively.[2]

Related to a show is the "field day", with elements of a trade show for machinery, equipment and skills required for broadacre farming. Field days typically do not involve livestock, showbags or sideshows, but may include events such as ploughing competitions not usually associated with shows due to the larger space required. In some communities in northern England Field Days (or Club Days) have lost their agricultural character and have become community celebrations.

The events are good sources of agricultural information, as organizers can arrange for guest speakers to talk on a range of topics, such as the talk on the yellow-flowering alfalfa at the South Dakota field day.[3] Pecan growers were given a talk on insect control by an entomologist at a recent field day at LSU AgCenter’s Pecan Research/Extension Station in Shreveport, La.[4]

A Landcare survey conducted in 1992/93 revealed that field days in Australia have a high value among local farmers.[5] New Zealand National Agricultural Fieldays is held at Mystery Creek, Hamilton, New Zealand and attracts 1,000 exhibitors and over 115,000 visitors through its gates.[6] Smaller shows, held annually in New Zealand's towns and communities, are generally called agricultural and pastoral shows (A&P shows).