The domestic pig (also swine, in some areas hog) is a domesticated animal that traces its ancestry to the wild boar, and is considered a subspecies of the wild boar or a distinct species in its own right. It is likely the wild boar was domesticated as early as 13,000 BC in the Tigris River basin. Pigs are farmed for the consumption of their flesh, but some cultures have religious dietary laws that forbid the consumption of pig meat. The animal's bones, hide, and bristles have been fashioned into items for human use such as brushes, and pigs have been kept as pets, especially the pot bellied pig. Miss Piggy, Babe, and Porky the Pig represent the domestic pig in entertainment and "The Three Little Pigs", Charlotte's Web, and The Sheep-Pig are prominent examples of the domestic pig in literature.

Most domestic pigs have rather sparse hair covering on their skin, although woolly coated breeds, such as the Mangalitsa, are raised.[1]

The domestic pig is most often treated as a subspecies of its wild ancestor, the wild boar, and in this case it is given the scientific name Sus scrofa domesticus.[2][not in citation given] Some taxonomists treat the domestic pig as a separate species, when it is called Sus domesticus, and wild boar is S. scrofa.[3][Full citation needed] Wild boar were in human association as early as 13,000–12,700 BC. Escaped domestic pigs have become feral in many parts of the world (for example, New Zealand) and have caused substantial environmental damage.[4][5] 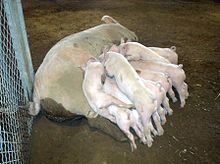 A sow suckling her piglets

Archaeological evidence suggests that pigs were domesticated from wild boar as early as 13,000–12,700 BC in the Near East in the Tigris Basin[6] being managed in the wild in a way similar to the way they are managed by some modern New Guineans.[7] Remains of pigs have been dated to earlier than 11,400 BC in Cyprus that must have been introduced from the mainland which suggests domestication in the adjacent mainland by then.[8] There was also a separate domestication in China.[9]

DNA evidence from sub-fossil remains of teeth and jawbones of Neolithic pigs in Europe shows that the first domestic pigs there had been brought from the Near East. This stimulated the domestication of local European wild boar resulting in a third domestication event with the Near Eastern genes ceasing in European pig stock. Modern domesticated pigs have involved complex exchanges with European domesticated lines being exported in turn to the ancient Near East.[10][11] Historical records indicate that Asian pigs were introduced into Europe during the 18th and early 19th centuries.[9]

The adaptable nature and omnivorous diet of the wild boar allowed early humans to domesticate it readily. Pigs were mostly used for food, but early civilizations also used the pigs' hides for shields, bones for tools and weapons, and bristles for brushes.[12] In India pigs have been domesticated since a long time mostly in Goa and some rural areas for pig toilets. Though ecologically logical as well as economical pig toilets are waning in popularity as use of septic tanks and/or sewerage system is increasing in rural areas.

Pigs were brought to southeastern North America from Europe by de Soto and other early Spanish explorers. Escaped pigs became feral and caused a great deal of disruption to Native Americans cultures who had no domesticated livestock.[13] 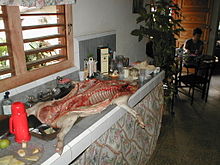 A pig is prepared for food in Viñales, Cuba.

The domestic pig is mostly used for its meat, pork. Other products made from pigs include sausage, bacon, gammon, ham and pork scratchings. The head of a pig can be used to make a preserved jelly called head cheese (brawn). Liver, chitterlings, blood (blood pudding or black pudding) and other offal from pigs are also widely used for food. In some religions, such as Judaism and Islam, there are religious restrictions on the consumption of pork.

In developing nations, and often in developed nations, the domestic pig is a native species raised outdoors in yards or fields. In some cases pigs are allowed to forage in woods, where they may be watched by swineherds. In industrialized nations, domestic pig farming has shifted away from the traditional pig farm to large-scale intensive pig farms. This has resulted in lower production costs, but significant animal welfare concerns.

Pigs are particularly valued in China and on certain oceanic islands, where their self-sufficiency allows them to be turned loose, although the practice is not without its drawbacks. With managed rotational grazing techniques pigs can be raised in an environmentally sound manner on pasture much like grazing sheep, goats and cows without high grain inputs.[14]

Pigs are known to be intelligent animals and can be trained similarly to dogs, though they may excel in different tasks.[15] Asian pot-bellied pigs, a small type of domestic pig, have made popular house pets in the United States beginning in the latter half of the 20th century. Domestic farmyard pigs have also been known to be kept indoors, but due to their large size and destructive tendencies, they typically need to be moved into an outdoor pen as they grow older. Most pigs have a fear of being picked up by the stomach, but will usually calm down once placed back on the floor. Pigs are rarely used as working animals. An exception is the use of truffle pigs – ordinary pigs trained to find truffles.

Miniature pigs, also called micro or teacup pigs, which are specifically bred to be small (from 29–65 lbs) gained in popularity in late 2009 after several mainstream press articles claimed they were a popular pet to celebrities such as Rupert Grint of Harry Potter fame.[16] Despite claims that the pigs will remain small their whole lives, however, these pigs may eventually grow to a large size comparable to other pet pigs.[17]

Pigs are exhibited at agricultural shows, judged either as stud stock compared to the standard features of each breed, or in commercial classes where the animals are judged primarily on their suitability for slaughter to provide premium meat. According to the American Livestock Breeds Conservancy,[18] seven breeds of swine in the US are critically rare (having a global population of fewer than 2000). Outside the US, the Auckland Island Pig (New Zealand) and woolly-coated grazing pig (Danube area) are known to be critically rare.