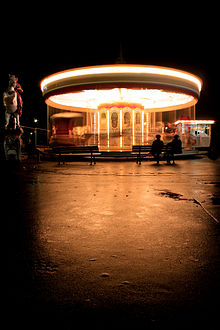 A carousel (from French carrousel, from Italian carosello), or merry-go-round, is an amusement ride consisting of a rotating circular platform with seats for riders. The "seats" are traditionally in the form of rows of wooden horses or other animals mounted on posts, many of which are moved up and down via gearwork to simulate galloping, to the accompaniment of looped circus music. This leads to one of the alternative names, the galloper. Other popular names are roundabout and flying horses. Merry-go-rounds always move counterclockwise.

Carousels are commonly populated with horses, but may include diverse varieties of mounts,[1] like pigs, zebras, tigers, mythological creatures (such as dragons, sea monsters or unicorns), and deer, to name a few. Sometimes, chair or bench-like seats are used as well, and occasionally mounts can be shaped like airplanes or cars.

Any rotating platform may also be called a carousel. In a playground, a roundabout or merry-go-round is usually a simple, child-powered rotating platform with bars or handles to which children can cling while riding. At an airport, rotating conveyors in the baggage claim area are often called carousels.[2] Various photographic slide projectors, notably those made by Kodak until 2004, used rotating trays or magazines called carousels to hold the slides and were often known as "carousel projectors".

Australian racegoers enjoy a merry-go-round at the Deepwater Races, circa 1910

The earliest known depiction of a carousel is in a Byzantine bas-relief dating to around 500 A.D., which depicts riders in baskets suspended from a central pole. The word carousel originates from the Italian garosello and Spanish carosella ("little battle"), used by crusaders to describe a combat preparation exercise and game played by Turkish and Arabian horsemen in the 12th century. In a sense this early device could be considered a cavalry training mechanism; it prepared and strengthened the riders for actual combat as they wielded their swords at the mock enemies. European Crusaders discovered this device and brought the idea back to their own lands.[citation needed] A carousel was also a training device for the ring-tilt, consisting of wooden horses suspended from arms branching from a central pole. Riders aimed to spear rings situated around the circumference as the carousel was moved by a man, horse, or mule.

Carousel was also the term for large "horse ballet" or Musical Ride spectacles mounted as part of the court festivities for special occasions such as royal weddings or state visits from the mid-16th century onwards, which gradually replaced serious jousting, although non-combat competitions such as the ring-tilt lasted until the 18th century. They were developed in Italy, especially by the Medici Grand-Dukes in Florence, and the first French example was in Paris in 1605. These usually took place in squares or large courtyards, and consisted of elaborately costumed riders and horses (usually from the cavalry) performing choreographed routines such as forming shapes together, riding in lines criss-cross against each other. They often took place at night, with riders carrying torches, and were accompanied by music. From the 17th century large decorated floats with allegorical figures were often included. The Place du Carrousel in Paris was so named from 1662, when it was used for such a display by Louis XIV.

In 1620 the English traveller Peter Munday described a carousel ride he saw in modern Bulgaria, then part of the Ottoman Empire. By the early 19th century carousels were being built and operated at various fairs and gatherings in central Europe and England. For example, by 1745 AD, wagon-maker Michael Dentzel had converted his wagon-making business in what is now southern Germany to a carousel-making enterprise. Animals and mechanisms would be crafted during the winter months and the family and workers would go touring in their wagon train through the region, operating their large menagerie carousel at various venues. Other makers such as Heyn in Germany and Bayol in France were also beginning to make carousels at this time. In its own unique style, England was also rapidly developing a carousel-making tradition. 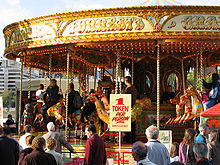 A carousel at a fair in London, with traditional animal mounts, barley twist poles and fairy lights.

Early carousels had no platforms: the animals would hang on poles or chains and fly out from the centrifugal force of the spinning mechanism; these are called "flying horses" carousels. They were often powered by animals walking in a circle or people pulling a rope or cranking. By the mid-19th century the platform carousel was developed where the animals and chariots would travel around in a circle sitting on a suspended circular floor which was hanging from the centre pole. The first known recorded Steam powered carousel was created by Thomas Hurst and shown at Bolton (Lancashire, England) New Year Fair in 1861.[3] Eventually, with the technological advances of the industrial revolution, bevel gears and offset cranks were installed on these platform carousels, thus giving the animals their well-known up and down motion as they traveled around the centre pole. The platform served as a position guide for the bottom of the pole and as a place for people to walk or other stationary animals or chariots to be placed. Fairground organs (band organs) were often present (if not built in) when these machines operated. Eventually electric motors were installed and electric lights added, giving the carousel its classic look.

Carousel built in 1905 by Gustave Dentzel which is still operational in Rochester, New York

Although the carousel developed gradually in European countries such as Germany, France, England, and Italy, it did not reach its full scale development until it went into its American phase. This began with several makers, primarily Gustav Dentzel, Michael Dentzel's son, of Germany, and Dare from England. Michael Dentzel sent all four of his sons over to America in the 1850s, one of them, Gustav, with a full and complete large carousel packed away on the steamship. In early 1860 Gustav set up his family's carousel in Philadelphia to test the American market. It met with great success. At the same time he opened up a carousel and cabinet workshop in Germantown. This eventually became the headquarters for one of America's greatest carousel-making families. Shortly after this beginning other carousel makers from Europe began to arrive on American shores. Many fine woodcarvers and painters, classically trained in their European homeland, worked for these early American companies. The Dentzels, being of German origin, also employed other Germans such as the Muller brothers and also many Italians, such as Salvador Chernigliaro.

The first carousel to be seen in the United States was created in Hessville, Ohio during the 1840s by Franz Wiesenhoffer. The first carousel patent was granted on July 25, 1871, to Willhelm Schneider of Davenport, IA.[4] Several centers and styles for the construction of carousels emerged in the United States, Philadelphia style, with Dentzel and the Philadelphia Toboggan Company, Coney Island style with Charles I. D. Looff, Charles Carmel, Marcus Charles Illions, Soloman Stein and Harry Goldstein and Mangels, Country Fair style with Allan Herschell and Edward Spillman of Upstate New York, and Charles W. Parker of Kansas. Early on the Dentzels became known for their beautiful horses and lavish use of menagerie animals on their carousels. Their mechanisms were also considered among the very best for durability and reliability. Gustav's sons, William and Edward operated the company until William's death in 1927 at which time the company was auctioned off. By this time many carousel companies had gone out of business or diversified into other rides due to the hardships of the depression. Young Edward Dentzel, who was operating carousels in Southern California at the time decided to stay there and become a luxury housing contractor in Beverly Hills; he eventually became the Mayor of that city in the early 1950s.

Many carousel connoisseurs consider the golden age of the carousel to be early 20th century America. Very large machines were being built, elaborate animals, chariots, and decorations were superbly made by skilled old-world craftsmen taking advantage of their new freedoms in America. Large amounts of excellent and cheap carving wood were available such as Appalachian white pine, basswood, and yellow poplar. Whereas most European carousel figures are relatively static in posture, American figures are more representative of active beasts - tossed manes, expressive eyes and postures of movement are their hallmarks. The first carousel at Coney Island, America's first major amusement park, was built in 1876 by Charles I. D. Looff, a Danish woodcarver. The oldest functional carousel in Europe is in Prague (Letná Park). Another style is a double-decker, where there is a huge carousel stacked on top of another. An example is the Columbia Carousel.

In the 1920s another noted wood carver of horses for US carousel's was Frank Carretta of Philadelphia, Pennsylvania. Each year he carved an estimated 200 horses. [5]

William H. Dentzel of Port Townsend, Washington is the only descendant from a founding American carousel family of the United States still making wooden carousels. His carousels are similar to the oldest operating carousel in the United States in Watch Hill, R.I. (1893) built by the Dare company, a "flying horses" machine. The power sources for Dentzel’s contemporary carousels range from rope-pull to hand-crank to foot-pedal to AC 110 volt electric to DC solar power.

In the USSR in the 1970s and 1980s the carousel was not just a ride of amusement parks, but also an integral part of the urban culture. Many playgrounds, which existed in every yard, were equipped with a standard flower-shaped carousel, made of metallic bars with six wooden seats attached to them.

A carousel in Bunkyo, Japan 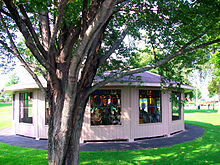 One of the carousels in Endicott, NY, West Endicott Park Carousel 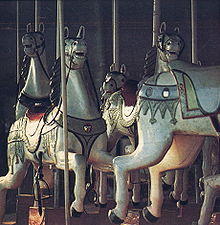 In the UK and Europe, merry-go-rounds (as they are most often referred to in those countries) usually turn clockwise (see photograph at top), while in North America, carousels typically go anti-clockwise (or "counter-clockwise") - looked on from above. One mounts a real horse by lifting one's right leg over the animal's back as it stands with its head towards one's left (the horse's left side is called its "near" side). Likewise for a carousel that turns anti-clockwise: one stands on the near side of the horse to mount (towards the center of the carousel, not on its outer edge). One possible reason for carousels in the USA turning anti-clockwise may be so that the rider can use their right hand to catch a brass ring.