Playground
This article is about an area for play. For other uses, see Playground (disambiguation). 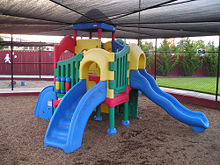 A playground or play area is a place with a specific design for children be able to play there. It may be indoors but is typically outdoors (where it may be called a tot lot in some regions.[1])

Playgrounds often also have facilities for playing informal games of adult sports, such as a baseball diamond, a skating arena, a basketball court, or a tether ball.

Public playground equipment refers to equipment intended for use in the play areas of parks, schools, child care facilities, institutions, multiple family dwellings, restaurants, resorts, and recreational developments, and other areas of public use.

A type of playground called a playscape is designed to provide a safe environment for play in a natural setting.

Playgrounds originated in Germany. They were created as organized and instructional play areas for the use of teaching children the proper ways to play. Over time, organized playing areas have been adopted by other countries of the world and have become commonplace. The widespread adoption of playgrounds led to the Germanisation of some aspects of childhood development.

City streets are unsatisfactory playgrounds for children because of the danger, because most good games are against the law, because they are too hot in summer, and because in crowded sections of the city they are apt to be schools of crime. Neither do small back yards nor ornamental grass plots meet the needs of any but the very small children. Older children who would play vigorous games must have places especially set aside for them; and, since play is a fundamental need, playgrounds should be provided for every child as much as schools. This means that they must be distributed over the cities in such a way as to be within walking distance of every boy and girl, as most children can not afford to pay carfare.[2]

Professionals recognize that the social skills that children develop on the playground become lifelong skill sets that are carried forward into their adulthood. Independent research concludes that playgrounds are among the most important environments for children outside the home. Most forms of play are essential for healthy development, but free, spontaneous play—the kind that occurs on playgrounds—is the most beneficial type of play.

The relationship between playground activity and the promotion of children’s self-esteem.

There is a general consensus that physical activity reduces the risk of psychological problems in children and fosters their self-esteem. 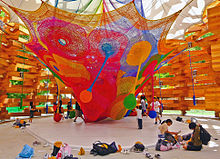 This consensus is reflected in the Chief Medical Officer’s report (Department of Health, 2004), which stated that a review of available research suggests that the health benefits of physical activity in children are predominantly seen in the amelioration of risk factors for disease, avoidance of weight gain, achieving a peak bone mass and mental well-being.

Evidence suggests that children who participate in physical activity improve their self-esteem. Indeed, Ekeland, Heian and Hagan (2005) and Gruber (as cited in Biddle and Mutrie, 2001, p186) found that exercise programmes had a significant positive effect on children's self-esteem.

Moreover, commentators argue that the quality of a child’s exercise experience can affect their self-esteem. Ajzen TPB (1991) promotes the notion that children’s self-esteem is enhanced through the encouragement of physical mastery and self-development. It can be seen that playgrounds provide an ideal opportunity for children to master physical skills, such as learning to swing, balance and climb. Personal development may be gained through the enhancement of skills, such as playing, communicating and cooperating with other children and adults in the playground.

It can also be seen that public and private playgrounds act as a preventative health measure amongst young people because they promote physical activity at a stage in children’s lives when they are active and not yet at risk from opting out of physical activity.

Children’s self-esteem may be enhanced through early positive exercise experiences that contain challenge, fun and excitement.

Seesaw with a crowd of children playing

Children have devised many playground games and pastimes. But because playgrounds are usually subject to adult supervision and oversight, young children's street culture often struggles to fully thrive there. Research by Robin Moore (Childhood's Domain: Play and Place, 1986) has clearly shown that playgrounds need to be balanced with marginal areas that (to adults) appear to be derelict or wasteground but to children they are area's that they can claim for themselves, ideally a wooded area or field.

A type of playground called a playscape can provide children with the necessary feeling of ownership that Moore describes above. Playscapes can also provide parents with the assurance of their child's safety and wellbeing, which may not be prevalent in an open field or wooded area.

Safety, in the context of playgrounds, is generally understood as the prevention of injuries. Risk aversion and fear of lawsuits on the part of the adults who design playgrounds prioritizes injury prevention above other factors, such as cost or developmental benefit to the users.[3] It is important that children gradually develop the skill of risk assessment, and a completely safe environment does not allow that.

Sometimes the safety of playgrounds is disputed in school or among regulators. Over at least the last twenty years, the kinds of equipment to be found in playgrounds has changed, often towards safer equipment built with plastic. For example, an older jungle gym might be constructed entirely from steel bars, while newer ones tend to have a minimal steel framework while providing a web of nylon ropes for children to climb on. Playgrounds with equipment that children may fall off often use mulch on the ground to help cushion the impact.[4]

Safety discussions do not normally include an evaluation of the unintended consequences of injury prevention, such as older children who do not exercise at the playground because the playground is too boring.[5]

In the United States, the Consumer Product Safety Commission and the American National Standards Institute have created a Standardized Document and Training System for certification of Playground Safety Inspectors. These regulations are nationwide and provide a basis for safe playground installation and maintenance practices. ASTM F1487-07 deals with specific requirements regarding issues such as play ground layout, use zones, and various test criteria for determining play ground safety. ASTM F2373 covers public use play equipment for children 6–24 months old. This information can be applied effectively only by a trained C.P.S.I. A National Listing of Trained Playground Safety Inspectors is available for many states. A Certified Playground Safety Inspector (CPSI) is a career that was developed by the National Playground Safety Institute (NPSI) and is recognized nationally by the National Recreation and Park Association or N.R.P.A. (Some information sources offer interactive examples of playground equipment that violates CPSC guidelines.)

European Standards EN 1177 specifies the requirements for surfaces used in playgrounds. For each material type and height of equipment it specifies a minimum depth of material required.[8] EN 1176 covers playground equipment standards.[9][10] In the UK, playground inspectors can sit the examinations of the Register of Play Inspectors International at the three required levels - routine, operational and annual. Annual inspectors are able to undertake the post-installation inspections recommended by EN 1176.

How effective these strategies are at preventing injuries is debated by experts, because when playgrounds are made from padded materials, children often take more risks.[5][11] 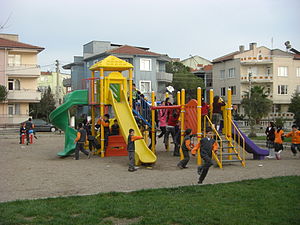 A crowded playground in Turkey

From January 1990 to August 2000, CPSC received reports of 147 deaths to children younger than 15 that involved playground equipment.

Girls were involved in a slightly higher percentage of injuries (55%) than were boys (45%).

Falls to the surface was a contributing factor in 79% of all injuries. On home equipment, 81% were associated with falls.

In 1995, playground-related injuries among children ages 14 and younger cost an estimated $1.2 billion.[14]

On public playgrounds, more injuries occur on climbers than on any other equipment.[13] On home playgrounds, swings are responsible for most injuries.[13]

The equipment limitations result in the children receiving less value from the play time.[5] The enclosed, padded, constrained, low structures prevent the child from taking risks and developing a sense of mastery over his or her environment. Successfully taking a risk is empowering to children. For example, a child climbing to the top of a tall jungle gym feels happy about successfully managing the challenging climb to the top, and he experiences the thrill of being in a precarious, high position. By contrast, the child on a low piece of equipment, designed to reduce the incidence of injuries from falls, experiences no such thrill, sense of mastery, or accomplishment. Additionally, a lack of experience with heights as a child is associated with increased acrophobia (fear of heights) in adults.[5]

The appearance of safety encourages unreasonable risk-taking in children, who might take more reasonable risks if they correctly understood that it is possible to break a bone on the soft surfaces under most modern equipment.[5][11]

Finally, the playground that is designed to appear low-risk is boring, especially to older children.[5] As a result, they tend to seek out alternative play areas, which may be very unsafe.[5]

Risk management is an important life skill, and risk aversion in playgrounds is unhelpful in the long term. Experts studying child development such as Tim Gill have written about the over-protective bias in provision for children, particularly with playgrounds.[11] Instead of a constructed playground, allowing children to play in a natural environment such as open land or a park is sometimes recommended; children gain a better sense of balance playing on uneven ground, and learn to interpret the complexity and signals of nature more effectively.[11]

Playgrounds in the Soviet Union

Playgrounds were an integral part of urban culture in the USSR. In the 1970s and 1980s, there were playgrounds in almost every park in many Soviet cities. Playground apparatus was reasonably standard all over the country; most of them consisted of metallic bars with relatively few wooden parts, and were manufactured in state-owned factories. Some of the most common constructions were the carousel, sphere, seesaw, rocket, bridge, etc.

In the 1990s, after the breakup of the USSR, many items of playground apparatus in post-Soviet states were stolen by metal-thieves, while relatively few new playgrounds were built. However, there were so many Soviet playgrounds that many of them still exist and are in a relatively good state, especially those that were repainted.

Universally designed playgrounds are created to be accessible to all children. There are three primary components to a higher level of inclusive play:

Some children with disabilities or developmental differences do not interact with playgrounds in the same way as typical children. A playground designed without considering these children's needs may not be accessible or interesting to them.

Most efforts at inclusive playgrounds have been aimed at accommodating wheelchair users. For example, rubber paths and ramps replace sand pits and steps, and some features are placed at ground level. Efforts to accommodate children on the autism spectrum, who may find playgrounds overstimulating or who may have difficulty interacting with other children, have been less common.[16]

"Natural playgrounds" are play environments that blend natural materials, features, and indigenous vegetation with creative landforms to create purposely complex interplays of natural, environmental objects in ways that challenge and fascinate children and teach them about the wonders and intricacies of the natural world while they play within it.