Manhunting is the deliberate identification, capturing, or killing of senior or otherwise important enemy combatants, classified as high-value targets, usually by special operations forces and intelligence organizations. According to a 2008 study,[1] since 1968, 40% of armed non-state groups met their end because local police and intelligence agencies arrested or killed key members.

A response to asymmetric tactics adopted by terrorists, insurgents, pirates, narco-traffickers, arms proliferators, and other non-state actors, manhunting has been adopted by military and intelligence organizations to reduce collateral damage that would occur during a conventional military assault.

The most visible such operations conducted today involve counterterrorist activities. Some involve government-sanctioned targeted killing or extrajudicial execution. Operations to capture terrorists have drawn political and legal controversy. See Legal Issues below. Other military operations, such as hostage rescue or personnel recovery, employ similar tactics and techniques. The primary difference in hostage rescue or personnel recovery is that the person being rescued or recovered wants to be found; while high-value targets want to avoid being found.

Ancient times through conquest of the New World 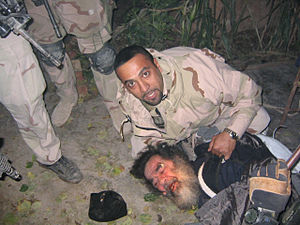 In 1967, Che Guevara was pursued by the Bolivian military, who were poorly trained and equipped. The U.S. government sent a team of the CIA's Special Activities Division commandos and other operatives into Bolivia to aid the anti-insurrection effort. The Bolivian Army was also trained, advised, and supplied by U.S. Army Special Forces including a recently organized elite battalion of Rangers trained in jungle warfare that set up camp in La Esperanza, a small settlement close to the location of Guevara's guerrillas.[5] Félix Rodríguez, a Cuban exile turned CIA Special Activities Division operative, advised Bolivian troops during the hunt for Guevara in Bolivia.[6] On October 7, an informant apprised the Bolivian Special Forces of the location of Guevara's guerrilla encampment in the Yuro ravine. They encircled the area with 1,800 soldiers, and Guevara was wounded and taken prisoner while leading a detachment with Simeón Cuba Sarabia.[7] On October 9, Bolivian President René Barrientos ordered that Guevara be summarily executed.[8]

France deployed GIGN antiterrorist police and the French Navy to capture Somali pirates who had seized the 850-ton yacht Le Ponant. On April 11, 2008, the French forces captured six of 10 pirates as they attempted to escape with a $2 million ransom.[12] The French operations brought publicity to the work of NATO's Combined Task Force 150. CTF 150, established shortly before the beginning of Operation Enduring Freedom, conducts Maritime Security Operations (MSO) in the Gulf of Aden, Gulf of Oman, the Arabian Sea, Red Sea and the Indian Ocean. In August 2008, CTF 150 established a Maritime Security Patrol Area in the Gulf of Aden to combat Somali piracy.[13]

Jemaah Islamiya terror suspect Noordin Mohammed Top was killed during a raid on his hideout by counterterrorism police in Temanggung, Central Java on August 8, 2009.[14]

Iraqi Prime Minister Nouri Maliki and US officials announced on Apr 19, 2010 that two leaders of al-Qaeda in Iraq had been killed in a joint Iraqi-US operation. al-Qaeda leader Abu Ayyub al-Masri and Abu Omar al-Baghdadi, who led an affiliate group, were killed in the joint raid which took place in Thar-Thar, west of Baghdad. The house was destroyed and the two bodies were found in a hole in the ground in which they had been hiding. Mr Maliki said, "During the operation computers were seized with e-mails and messages to the two biggest terrorists, Osama bin Laden and Ayman al-Zawahiri." In a statement, the commander of US forces in Iraq, Gen Raymond T. Odierno, said: "The death of these terrorists is potentially the most significant blow to al-Qaeda in Iraq since the beginning of the insurgency."[16]

See also: Israeli targeted killings Israel may have the most advanced and experienced manhunters.

Israel has continued to employ the targeted killing of violent radical opponents. Notable operations include:

North Korea secretly sent a 31-man detachment from its 124th Army Unit into the Republic of Korea to kill President Park Chung-hee, nearly succeeding in a Jan 21, 1968 raid on the Blue House.[31]

In the Rhodesian/Zimbabwe War of Independence (Chimurenga War, 1966–1980), the Selous Scout were officially credited with either directly or indirectly being responsible for 68% of all insurgents killed, while losing less than 40 scouts in the process.[32] The Selous Scouts, Grey's Scouts and Tracker Combat Unit were formed to pursue Zambian terrorists deep into the African bush. Their first operational use was in 1967.[33][34] 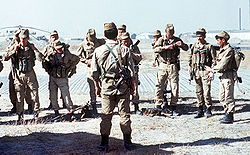 The United States has used armed forces or militia to apprehend people deemed threats to national security since colonial times.[47]

The United States Army was sent to pursue leaders or small bands of Native Americans who defied the U.S. government, including Black Hawk, Chief Joseph, Geronimo and Victorio.

A squadron of P-38 Lightning twin-engined fighters was sent to shoot down Admiral Isoroku Yamamoto's transport aircraft in Operation Vengeance, downing his bomber on April 18, 1943 as it approached Bougainville.

A shift in US national security policy began to emerge in the late 20th century, as national leaders began to identify individuals as adversaries, rather than countries. This became evident in the hunts for: 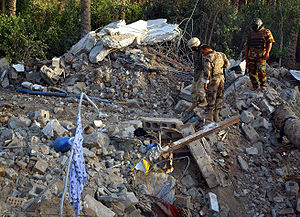 Military manhunts within the United States

On March 26, 2010, in a speech before the American Society of International Law, United States Department of State Legal Advisor Harold Koh formally announced the United States' legal interpretation of international law with respect to targeted killing. Koh first stated that "U.S. targeting practices, including lethal operations conducted with the use of unmanned aerial vehicles (UAVs), comply with all applicable law, including the laws of war." He further explained that the United States is in "an armed conflict with al Qaeda, the Taliban, and the associated forces" and thus has the lawful right to use force "consistent with its inherent right to self-defense" under international law[95] in response to the 9/11 attacks. Under domestic law, he stated that targeted killings are authorized by the 2001 Authorization for Use of Military Force (AUMF). Although he contended that these international and domestic legal grounds "continue to this day," he also provided additional justification for current U.S. actions based on continued attacks and intent by al Qaeda. He concluded that the existence of this "ongoing armed conflict" grants legal authority to the United States to protect its citizens through the use of force, including lethal force, as a matter of self-defense. Koh then addressed specific legal reasoning and standards considered by the United States "when defending itself against high-level leaders planning the attacks." He reiterated the widely accepted conceptualization of an "organized terrorist enemy" as one that does not have conventional forces. Instead, such an enemy plans and executes its attacks while hiding among civilian populations, he said. As such, "that behavior simultaneously makes the application of international law more difficult and more critical for the protection of innocent civilians." Koh identified three elements related to situational considerations that the United States uses when determining whether a specific targeted drone killing at a particular location will occur:

Koh stated that the "rules" of targeting operations used by the United States are consistent with principles under the laws of war. He cited two well-known principles that govern the State's use of force during an armed conflict: distinction and proportionality. These principles are designed to protect civilians once armed conflict has begun. They are recognized under customary international law as part of Jus in Bello (conduct during war).