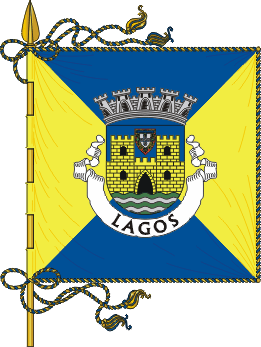 Lagos (pron. IPA2|'laguʃ, literally "Lakes") is a city and a municipality at the mouth of the river in the southern region of , in . The municipality has a total population of 27,041 inhabitants. The city itself has a population of 14,675. [ [http://62.48.187.117/atlas/Cap2/Cap2d_2.html UMA POPULAÇÃO QUE SE URBANIZA, Uma avaliação recente - Cidades, 2004] Nuno Pires Soares, Instituto Geográfico Português (Geographic Institute of Portugal)] The majority of the population lives along the coastal line and works in tourism and services. The inland region in sparsely inhabited, with the majority of the people working in agriculture and forestry.

Lagos is located approximately 35 kilometers east of Point, the southwesternmost point of . To the north of Lagos is the road to Milfontes and Sines, that winds through the scenic protected landscape of the Southwest Natural Park.

Lagos is an ancient maritime town with more than 2,000 years of history. The name "Lagos" has a Celtic origin and is derived from the word "Lacobriga". Lagos first became a settlement of the Carthaginians,who recruited Celtic tribesmen in their war against the Romans (the ). Later it became colonized by the Romans, becoming part of the Roman province Lusitania. Some Roman remains can still be found in Lagos and the surrounding countryside. , a Roman rebellious general, helped by the Lusitanians of Lacobriga, fought successfully a battle against the Roman army of probably at nearby Monte Molião. Lacobriga was already in those times an important harbour.

The town was occupied in the sixth century by the from the Kingdom of Toledo and later by the Byzantines. The came in the eighth century. The renamed the town "Zawaia" (meaning "Lago" = lake). It was part of the coastal region "al-Gharb" (hence the name "Algarve"). The Moors fortified the town and established important trade links. In 1174 the local gave permission for the construction of a church of St. John the Baptist outside the town walls. This is the oldest church in the Algarve.

Even as King was reconquering Portugal (the ), the southern part (Algarve and Alentejo) remained under Moorish domination. It was captured by King in 1241. After the complete capture of Algarve in 1249 the king gave himself the title "King of Portugal and the Algarve", stressing the fact that the Algarve, after the long rule by the Moors, was considered a foreign country and not part of Portugal.

Lagos became an independent jurisdiction under the rule of King Pedro I in 1361. King João I assembled his fleet in the harbour of Lagos, before setting sail for the siege and conquest of the city of in 1415. This was the first step in opening the Arabian world to medieval Europe, which in fact led to the with Portuguese explorers sailing across the whole world.

Thus Lagos became important during the period of Portuguese exploration. Prince , third son of King João I, lived most of the time in Lagos. From here he directed expeditions to and to the western coast of with s, -rigged ships with excellent seafaring capabilities. Lagos was also the home port for who was the first to sail beyond in 1434, then considered the end of the world. This was a breakthrough in the Portuguese exploration of Africa. Lagos was at least as important during the as was during the early years of . Nigeria's former capital, , probably was named after the Portuguese location.

It was also through Lagos that the first African s entered post-mediaeval Europe. There is a 17th century building standing on the exact site where the first slave markets were held in the 15th century. As the major sponsor of these expeditions, Prince Henry received one fifth of the selling price of the slaves. After his death the town began to slumber as the Royal family lost interest in the Algarve. All major trading houses then took up residence in .

King Sebastião, obsessed with his plans for a great crusade against the , assembled a huge fleet in Lagos in 1578. During this ill-fated attempt he and most of Portugal's nobility were killed in the in Morocco.

The old Portuguese town was a very beautiful city with many monuments until it was destroyed by the and of . But it still preserves some rebuilt walls from the , a governor's from the 17th, and the site of what is believed to have been the first black slave market in Europe (the "Mercado de Escravos", opened in 1444).

Its plain façade with the dissimilar bell towers, dating from 1715, contrasts sharply with the extravaganza of the beautiful and richly decorated interior. Its blue-and-white s (18th century) and gilded, intricate wooden carvings ("talha dourada") (among the most beautiful in the country) fill every inch of the walls of the , together with the six Baroque paintings by Mestre José Joaquim Rasquinho, representing the miracles of St. Anthony. The wooden was painted with a trompe-l'oeil effect, leading one to believe it is much higher. The polychrome statues of s playing with animals and fishes are a delight to the eye.

This church of St. Anthony of Lisbon was one of the few building to survive quasi-intact the Great Earthquake of 1755. There was some reconstruction by the commander of Lagos Infantry Regiment. That is probably why the polychrome statue of St. Anthony on the altar wears a military sash. It was also in this church that King Sebastião reputedly attended his last mass before his ill-fated expedition to Morocco.

This modest regional museum is located next to the church of St. Anthony. It houses an eclectic collection of archaeological finds from the prehistory (s, teeth...) and the (axeheads, pottery shards...). The mishmash continues with an assembly of minerals, Roman mosaics and Moorish oillamps and pottery. The ethnographic section deals with scenes from the past in the Algarve and, interestingly, very old weapons and artefacts from . There is also an assorted display of old European weapons such as swords, muskets and cannonballs.One can also see the by which King Manuel conferred some priovileges to Lagos. Probably the most valuable items are the sacerdotal vestments worn during the last Holly Mass attended by King Sebastião, before leaving on his ill-fated conquest of Morocco. There is also a dating from the 16th century with scenes from the and .

When Portugal came under Spanish rule, the Portuguese coast became a target for the British fleet. Lagos, close to the Spanish naval base of , was attacked by Sir in the late 1580s. But the inhabitants put up such a good defence that he had to abort his attack on Lagos and instead sacked the nearby fort of . Furthermore the coast was under regular attack of s and s. As well Spanish naval attacks occurred during the (1640-1668). This led to the construction of a string of forts all along the coast. One of them was this late 17th century fort in Lagos, built between 1679 and 1690 (according to the stone inscription over the main door).

This squat rectangular fort guards the entrance to the harbour. One enters the fort via a small . The terrace offers a splendid view on the town, the beach and the harbour. The small chapel is decorated with 17th century azulejos (tiles).

Up until the late 20th century, the fort was used as a service depot for the militry base in Lagos, although it also housed other services linked to maritime activities, such as supplies for lifeboats and for sports activities (e.g., sailing) for young people. It was restored between 1958 and 1960, and officially acquired by the municipality of Lagos in 1983. Several rooms have been converted into exhibition displays of the voyages of discovery with s and models of caravels

Lagos' economy, like many coastal towns in Portugal, has always been closely linked to the sea, and has been an important activity since very ancient times. Since , the city has embraced , which has become its most important economic activity. It has beautiful beaches, good climate, the sea, a scenic coastline, and historical patrimony. It also has plenty of cultural and night-life entertainment venues. Many local traditions are celebrated, ranging from architecture to gastronomy and handicrafts.

In gastronomy, there are the local specialties: "Dom rodrigos" and "morgados" cookies based on local products, such as s, s and eggs. Lagos is also a wine producing region and is famous for its "" wine, and also for a strong alcoholic spirit, the "aguardente de medronho", made of berries of .

The municipality is composed of the following 6 parishes:

*"Meia Praia" (Half beach) - With soft and white sand, is one of the biggest bays in Europe and has a calm sea due to its width. Owing to its lack of rocks it is ideal for nautical sports. When the wind is strong, there are many sheltered sand beaches between the cliffs.
*"Praia Solaria" (Sunny beach).
*"Praia da Batata" (Potato beach) - It's a small beach tucked between two small cliffs, where the river meets the Atlantic Ocean. It is also known by the small music festivals that take place there during Summer.
*"Praia dos Estudantes" (Students' beach).
*"Dona Ana" - Probably the beach most frequented by tourists, and for good reason. The sand on Dona Ana is slightly thicker than the beaches in the surrounding area, and the beach itself is bounded by lovely rock formations. Many different shapes come alive when you look at the rock formation, a birthday cake, the titanic, and the sphynx's to name a few. Dona Ana is essentially split into two beaches with a protruding cliff separating the two sides at high tide.
*"Canavial"
*"Camilo"
*"" (Light beach) - A beach in the popular nearby tourist town of Luz, the beach has watersports facilities and is bounded on its Eastern side by the so-called 'Rocha Negra'.