Sebastian "the Desired" (Sebastião I, Portuguese pronunciation: [sɨbɐʃˈti.ɐ̃w̃], o Desejado; Lisbon, 20 January 1554 – presumed to have died at Alcácer-Quibir, 4 August 1578) was the 16th king of Portugal and the Algarves. He was the son of Prince John of Portugal and his wife, Joan of Spain. He was the grandson of John III of Portugal and Holy Roman Emperor Charles V.

Sebastian was born shortly after 8 in the morning of 20 January 1554 (the feast of Saint Sebastian), and he was given the saint's name in commemoration. The name Sebastian was highly unusual for members of any European royal family at the time. Shortly after his birth a doctor, Fernando Abarca Maldonado, who had come to Portugal in the entourage of his mother and probably had helped deliver him, cast his horoscope. Among other things, Maldonado predicted that Sebastian would be very attracted to women, marry and have many children, none of which came to pass.[citation needed]

Accession to the Throne as a Minor and Regency 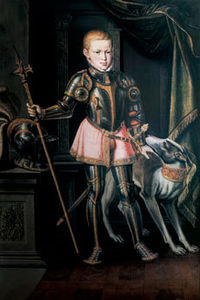 Sebastian was born heir to the throne of Portugal, since his birth occurred two weeks after the death of his father. He succeeded to the throne at the age of three, on the death of King John III, his paternal grandfather. Soon after his birth, his mother Joan of Spain left her infant son to serve as Regent of Castile for her father, Emperor Charles V. After his abdication in 1556, she served in the same capacity for her brother Philip II of Spain. Joan remained in Spain until her death in 1573, never to see her son again. Since Sebastian was still a child, the regency was handled first by his paternal grandmother, Catherine of Austria, and then by his great-uncle, Cardinal Henry of Évora. This period saw continued Portuguese colonial expansion in Angola, Mozambique, and Malacca, as well as the annexation of Macau in 1557.

Sebastian was a bright and lively boy. Reports say he was fearless due to having "so much strength". Tall, slim, and blond, he was brought up by his grandmother, Catherine, a domineering woman who exercised firm control over her weaker-willed grandson. Later in life, however, he became obstinate and impulsive. 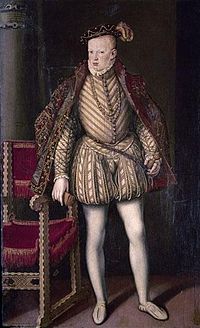 The young king grew up under the guidance and heavy influence of the Jesuits. Aleixo de Meneses, a military man of solid reputation and former tutor and guardian of Prince John, was appointed tutor to Sebastian by the boy's grandmother, Catherine. Other teachers included the priest Luís Gonçalves da Câmara and his assistant, the priest Amador Rebelo. Luís Gonçalves da Câmara became Sebastian's confessor, having previously been the confessor of prince John in 1550.

His upbringing made Sebastian extremely devout. He carried a copy of Thomas Aquinas on a belt at his waist and was constantly accompanied by two monks of the Theatine Order, who were intent on preserving the King's innocence. As a child, Sebastian reportedly would react to visitors by running off into hiding with the monks until the visitors had gone.

Sebastian died young and did not marry. However, he was the subject of several proposed marriage alliances, in spite of his well known misogyny. In particular, the Queen dowager of France, Catherine de' Medici, nurtured for a long time a plan to marry her youngest daughter, Margaret of Valois, to Sebastian, a plan which was on occasion supported by Sebastian's maternal uncle, King Philip II of Spain. Sebastian himself, however, put an end to that plan, declaring that he was unimpressed by the mild suppression of the Huguenot Protestants in France, and that he would not bind himself to the House of Valois until he had seen how the situation would develop. Later, he agreed - being persuaded by emissaries of the Pope - to marry Margaret in order to prevent her from marrying the Huguenot Henry of Navarre; by that time, however, the French king and his mother were already intent on Margaret marrying Henry. Margaret married Henry in 1572. By then Sebastian was already 18 years old and his proposal was rejected.

Sebastian was also offered his cousin, Elisabeth of Habsburg, the daughter of Emperor Maximilian II. Sebastian himself made a proposal in 1577 to his first cousin Isabella Clara Eugenia, daughter of Philip II of Spain. 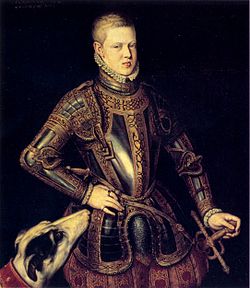 During Sebastian's short personal reign, through diplomatic efforts, he strengthened ties with Germany, England and France. He also restructured much of the administrative, judicial and military life in his kingdom. In 1568, Sebastian created scholarships to help financially the students who wished to take medicine or pharmacy in the University of Coimbra. The same he rewarded Indians in [Brazil]] who helped in the fight against the French. The chief of the Temiminós Indians, Araribóia, was given lands near the Bay of Guanabara. In 1569, Sebastian ordered Duarte Nunes de Leão to compile all the laws and legal documents of the kingdom in a collection of Leis Extravagantes known as Código Sebastiânico (Sebastian’s code).

During the great plague of Lisbon in 1569, Sebastian sent for doctors from Seville to help the Portuguese doctors fight the plague. He created two hospitals in Lisbon to take care of those afflicted with the plague. In his concern for the widows and orphans of those killed by the plague, he created several Recolhimentos (shelters) known as the Recolhimento de Santa Marta (shelter of Santa Marta) and the Recolhimento dos Meninos (shelter of the children) and provided wet nurses to take care of the babies. Sebastian created laws for the military, the Lei das Armas, that would become a military organization model. In 1570 Goa was attacked by the Indian army, but the Portuguese were successful in repulsing the assault. Also in 1570, Sebastian ordered that the Brazilian Indians should not be used as slaves and ordered the release of those held in captivity.

In 1572 the poet Luís de Camões presented his masterpiece Os Lusiadas and dedicated a poem to Sebastian that won him a royal pension. In 1573, he commissioned the construction of the Basilica Royal in Castro Verde as a tribute to the Battle of Ourique. In 1575 with the Carta de Lei de Almeirim, the king established a system of measures for solid and liquid products and also defined the role of public servants. The Celeiros Comuns (Communal Granaries) were inaugurated in 1576 on Sebastian's orders. These were lending institutions intended to help to poor farmers when farm production decreased, giving credit, lending seeds and commodities to the needy, allowing them to pay back with farm products when they recovered from losses.

The mathematician and cosmographer Pedro Nunes was appointed by Sebastian as a cosmography teacher for sea pilots. It was during Sebastian's reign that Nunes wrote the Petri Nonii Salaciensis Opera. The number of shipwrecks decreased and almost every single ship arrived in port during the whole of Sebastian's reign. In 1577 Sebastian’s ordinance Da nova ordem do juízo, sobre o abreviar das demandas, e execução dellas decreased the time for handling legal actions, regulated the action of lawyers, scribes and other court officials, and created fines for delays. 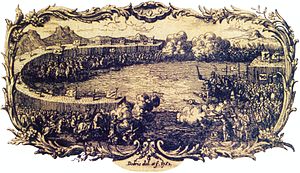 The Battle of Alcácer Quibir: the Portuguese forces (right) advance toward the Moroccan army (left). A mounted Sebastian can be seen to the right raising his sword

After attaining his majority in 1568, Sebastian dreamed of a great crusade against the kingdom of Morocco, where over the preceding generation several Portuguese way stations on the route to India had been lost. A Moroccan succession struggle gave him the opportunity, when Abu Abdallah Mohammed II Saadi lost his throne in 1576 and fled to Portugal, where he asked for King Sebastian's help in defeating his Turkish-backed uncle and rival, Abu Marwan Abd al-Malik I Saadi. Sebastian met during the Christmastide of 1577 with his uncle, Philip II of Spain, at Guadalupe in Castile. Philip refused to be party to the crusade as he was negotiating a truce with the Turks, though he promised a contingent of Spanish volunteers.

Despite having no son and heir, King Sebastian in 1578 embarked on his crusade. The Portuguese army of 17,000 men, including a significant number of foreign mercenaries (hired from Germany, the Netherlands, Spain, and Italy), and almost all of the country's nobility, sailed at the beginning of June from Lisbon, visited Cadiz, where they expected to find the Spanish volunteers, who failed to appear, then crossed into Morocco. At Arzila, Sebastian joined his ally Abu Abdullah Mohammed II, who had around 6,000 Moorish soldiers and, against the advice of his commanders, marched into the interior. At the Battle of Alcácer Quibir (Battle of the Three Kings), the Portuguese army was routed by Abd Al-Malik at the head of some 50,000 men. Sebastian was almost certainly killed in battle. He was last seen riding headlong into the enemy lines. Whether his body was ever found is uncertain, but Philip II of Spain claimed to have received his remains from Morocco and buried them in the Jerónimos Monastery in Belém, Lisbon, after he ascended to the Portuguese throne in 1580. Sebastian was succeeded as king by his great-uncle Henry, brother of his grandfather, King John III. 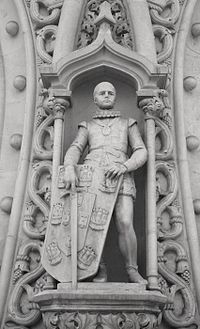 A sculpture of Sebastian

After the defeat at Alcácer Quibir many diligences were made to ransom the imprisoned soldiers. Several soldiers returned to Portugal, which, added to uncertainty over Sebastian's fate, led many Portuguese to believe Sebastian survived the battle and would return to claim his throne. This led to Sebastianism: the belief that Sebastian could return at any moment. Politically, there was the belief that Philip was not the rightful heir to the throne. Subsequently there was the appearance, in Portugal, of men fraudulently claiming to be the king. During the time of the Iberian Union, between 1580 and 1640, four different pretenders claimed to be the returned King Sebastian; the last of these pretenders, who was in fact an Italian, was hanged in 1619.

In the long term, it led to the development of myths and legends concerning Sebastian, the principal one being that he was a great Portuguese patriot, the "sleeping king" who would return to help Portugal in its darkest hour (similar to the British King Arthur, the German Frederick Barbarossa or the Byzantine Constantine XI Palaeologus). He would then be known by symbolic names: O Encoberto (The Hidden One) who would return on a foggy morning to save Portugal; or as O Desejado (The Desired One). The legend was vigorously promoted through the massive circulation of popular rhymes (trovas) written by António Gonçalves de Bandarra. Even as late as the 19th century, Sebastianist peasants in the Brazilian sertão believed that the king would return to help them in their rebellion against the "godless" Brazilian republic.

Media related to Sebastian of Portugal at Wikimedia Commons