This article is about the Portuguese prince. For the Dutch prince sometimes known as "Henry the Navigator", see Prince Henry of the Netherlands.

Henry the Navigator (Portuguese pronunciation: [ẽˈʁik(ɨ)]; Portuguese: Henrique o Navegador) (Porto, 4 March 1394 – 13 November 1460) was an infante of the Kingdom of Portugal and an important figure in the early days of the Portuguese Empire. He was responsible for the early development of European exploration and maritime trade with other continents.

Henry was the third child of King John I of Portugal, founder of the Aviz dynasty, and of Philippa of Lancaster, John of Gaunt's daughter. Henry encouraged his father to conquer Ceuta (1415), the Muslim port on the North African coast across the Straits of Gibraltar from the Iberian peninsula. He learnt of the opportunities from the Saharan trade routes that terminated there, and became fascinated with Africa in general; he was most intrigued by the Christian legend of Prester John and the expansion of Portuguese trade. Henry is regarded as the patron of Portuguese exploration.

In "Crónica da Guiné" Henry is described as having no luxuries, not avaricious, speaking with soft words and calm gestures, a man of many virtues who never allowed any poor person leave his presence empty-handed.

Henry was born in 1394 in Porto, probably when the royal couple was living in the city's old mint, now called Casa do Infante (Prince's House). He was the third son born to Philippa of Lancaster, the sister of King Henry IV of England. His sister died at a young age so he never got to have a relationship with her. Henry was 21 when he, his father and brothers captured the Moorish port of Ceuta in northern Morocco, that had long been a base for Barbary pirates who raided the Portuguese coast, depopulating villages by capturing their inhabitants to be sold in the African slave market. Following this success, Henry started to explore the coast of Africa, most of which was unknown to Europeans. His objectives included finding the source of the West African gold trade and the legendary Christian kingdom of Prester John, and stopping the pirate attacks on the Portuguese coast. At that time the ships of the Mediterranean were too slow and too heavy to make these voyages. Under his direction, a new and much lighter ship was developed, the caravel, which could sail further and faster. In 1419, Henry's father appointed him governor of the province of the Algarve.

On 25 May 1420, Henry gained appointment as the governor of the very rich Order of Christ, the Portuguese successor to the Knights Templar, which had its headquarters at Tomar. Henry would hold this position for the remainder of his life, and the order was an important source of funds for Henry's ambitious plans, especially his persistent attempts to conquer the Canary Islands, which the Portuguese had claimed to have discovered before the year 1346.

Henry also had other resources. When John I died, Henry's eldest brother, Edward became head of the castles council, and granted Henry a "Royal Flush" of all profits from trading within the areas he discovered as well as the sole right to authorize expeditions beyond Cape Bojador. He also held various valuable monopolies on resources in the Algarve. When Edward died eight years later, Henry supported his brother Peter for the regency during Alfonso V's minority, and in return received a confirmation of this levy. Henry also promoted the colonization of the Azores during Peter's regency (1439–1448). 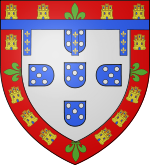 Coat of Arms of Infante Henry the Navigator, 1st Duke of Viseu.

According to João de Barros, in Algarve he repopulated a village that he called Terçanabal (from terça nabal or tercena nabal).[2] This village was situated in a strategic position for his maritime enterprises and was later called Vila do Infante.

From his Vila do Infante in 15th Century Portuguese, Estate or Town of the Prince on the Sagres peninsula located at the south-westernmost point of Iberia and with sea access to both the Atlantic and the Mediterranean, Henry sponsored voyages down the coast of Africa, sailing as far as Guinea, that were primarily exploration expeditions, later on bringing back to the nearby town of Lagos, from whence they set out, numerous African slaves and goods.

It is traditionally suggested that Henry gathered at his villa on the Sagres peninsula a school of navigators and map-makers. However modern historians hold this to be a misconception. He did employ some cartographers to chart the coast of Mauritania after the voyages he sent there, but there was no center of navigation science or observatory in the modern sense of the word, nor was there an organized navigational center.[citation needed]

The first contacts with the African slave market were made by expeditions to ransom Portuguese subjects enslaved by pirate attacks on Portuguese ships or villages. Henry justified this on the grounds that he was converting these captives to Christianity. As Sir Peter Russell remarks in his biography, "In Henryspeak, conversion and enslavement were interchangeable terms." He was a very strong Christian, and saw his efforts almost as a continuation of the crusades. His actions against native people who were not Christians were violent, and helped start a violent world trend. However his religious beliefs were sincere. The view that Henry's court rapidly grew into the technological base for exploration, with a naval arsenal and an observatory, etc., is believed by some historians, though not actually proven.[citation needed] Henry did possess geographical curiosity, though, and therefore employed cartographers. Jehuda Cresques, a noted cartographer, received an invitation to come to Sagres and make maps for Henry, a position he accepted. Henry was somewhat interested in profits from his voyages. From the first Africans that were brought to Lagos for sale in 1444 (see his contemporary biography by Zurara), he received from the merchants the value corresponding to the fifth part (o quinto) as the expedition had been sponsored by the shipowners.

The nearby port of Lagos provided a convenient harbor from which these expeditions left. The voyages were made in very small ships, mostly the caravel, a light and maneuverable vessel that used the lateen sail which had been the prevailing rig in Christian Mediterranean navigation since late antiquity.[3] Most of the voyages sent out by Henry consisted of one or two ships that navigated by following the coast, stopping at night to tie up along some shore.

Until Henry's time, Cape Bojador remained the most southerly point known to Europeans on the unpromising desert coast of Africa, although the Periplus of the Carthaginian Hanno the Navigator described a journey farther south about 2,000 years earlier.

As a second fruit of this work João Gonçalves Zarco, Bartolomeu Perestrelo and Tristão Vaz Teixeira rediscovered the Madeira Islands in 1420, and at Henry's instigation Portuguese settlers colonized the islands.

In 1427, one of Henry's navigators, probably Gonçalo Velho, discovered the Azores. Portugal soon colonized these islands in 1430.

Gil Eanes, the commander of one of Henry's expeditions, became the first European known to pass Cape Bojador in 1434. This was a breakthrough as it was considered close to the end of the world, with difficult currents that did not encourage commercial enterprise.

Henry also continued his involvement in events closer to home. In 1431 he donated houses for the Estudo Geral to reunite all the sciences — grammar, logic, rhetoric, arithmetic, music and astronomy — into what would later become the University of Lisbon. For other subjects like medicine or philosophy, he ordered that each room should be decorated according to each subject that was being taught.

He functioned as a primary organizer of the Portuguese expedition to Tangier in 1437. This proved a disastrous failure; Henry's younger brother Fernando was given as a hostage to guarantee that the Portuguese would fulfill the terms of the peace agreement that had been made with Çala Ben Çala. The agreement was first broken by the Moors, who attacked the Portuguese and captured the Portuguese wounded when they were being carried to the ships, killing those who tried to resist. The Archbishop of Braga and the count of Arraiolos refused to approve the terms in the reunion of the Portuguese Cortes, thus condemning Fernando to remain in miserable captivity until his death eleven years later. Henry for most of his last twenty-three years concentrated on his exploration activities, or on Portuguese court politics.

Using the new ship type, the expeditions then pushed onwards. Nuno Tristão and Antão Gonçalves reached Cape Blanco in 1441. The Portuguese sighted the Bay of Arguin in 1443 and built an important fort there around the year 1448. Dinis Dias soon came across the Senegal River and rounded the peninsula of Cap-Vert in 1444. By this stage the explorers had passed the southern boundary of the desert, and from then on Henry had one of his wishes fulfilled: the Portuguese had circumvented the Muslim land-based trade routes across the western Sahara Desert, and slaves and gold began arriving in Portugal. By 1452, the influx of gold permitted the minting of Portugal's first gold cruzado coins. A cruzado was equal to 400 reis at the time. From 1444 to 1446, as many as forty vessels sailed from Lagos on Henry's behalf, and the first private mercantile expeditions began.

Alvise Cadamosto explored the Atlantic coast of Africa and discovered several islands of the Cape Verde archipelago between 1455 and 1456. In his first voyage, which started on 22 March 1455, he visited the Madeira Islands and the Canary Islands. On the second voyage, in 1456, Cadamosto became the first European to reach the Cape Verde Islands. António Noli later claimed the credit. By 1462, the Portuguese had explored the coast of Africa as far as the present-day nation Sierra Leone. Twenty-eight years later, Bartolomeu Dias proved that Africa could be circumnavigated when he reached the southern tip of the continent, now known as the "Cape of Good Hope." In 1498, Vasco da Gama was the first sailor to travel from Portugal to India.

Henry was a lifelong bachelor and believed by his contemporaries to have been entirely celibate and childless. However, recent scholars, like Harold B. Johnson, hypothesized that the Prince might have been homosexually inclined.