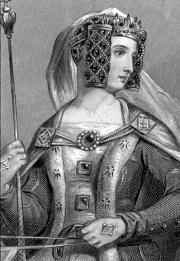 Philippa was born in (then in , now ) and was the daughter of and Jeanne of Valois, the granddaughter of .

She married Edward at , on , , eleven months after his accession to the English throne and, unlike many of her predecessors, she did not alienate the English people by retaining her foreign retinue upon her marriage or bringing large numbers of foreigners to the English court.

Philippa accompanied Edward on his expeditions to the (1333) and Flanders (1338-40), where she won acclaim for her gentleness and compassion. She is best remembered as the tender-hearted woman who interceded with her husband and persuaded him to spare the lives of (1346) whom he had planned to execute as an example to the townspeople following his successful siege. She acted as a regent on several occasions when he was on the continent.

Philippa had grown portly in her later years, and this added to the view most of her English subjects had of her as a friendly, homely, motherly woman whom the nation greatly loved. Philippa outlived 9 of her 14 children; two of whom were lost during the outbreak (1348).

On 15 August 1369 Philippa died of an illness akin to in , and was buried at . By all accounts, her 40 year marriage to Edward had been happy, despite his taking a mistress, , during the later part of it.

Philippa and Edward had fourteen children, including five sons who lived into adulthood and whose rivalry would eventually bring about the long-running civil wars known as the . Their sons are listed below:

Another three sons and two daughters died in infancy. There were four surviving daughters, listed below:

Philippa was also a descendant of through his daughter , married to of Kiev. His bloodline, however, had been reintroduced to the English royal family by Philippa's mother-in-law, , a granddaughter of , the wife of . Isabella of Aragon's mother, , was a daughter of , a grandson of by Euphrosyne of Kiev, herself a granddaughter of Gytha. Through her maternal great-grandmother, Maria of Hungary, she was descended from Elisabeth of Bosnia (born before 1241), a daughter of Kuthen, Khan of the Cumens and his Slavic wife, Galicie of Halicz, thus bringing Western Asian blood into the English royal line. [WorldRoots.com. bt Leo Van de Pas.]

is named after Philippa. It was founded by one of her chaplains, , in her honour.