For other meanings of this and similar words (words starting "Interrog...") see Interrogation (disambiguation). 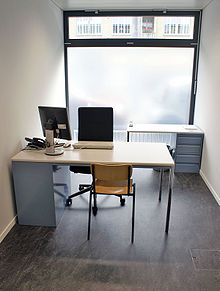 A police interrogation room in Switzerland.

Interrogation (also called questioning or interpellation) is interviewing as commonly employed by officers of the police, military, and Intelligence agencies with the goal of extracting a confession or obtaining information. Subjects of interrogation are often the suspects, victims, or witnesses of a crime. Interrogation may involve a diverse array of techniques, ranging from developing a rapport with the subject to outright torture.

There are multiple techniques employed in interrogation including deception, torture, increasing suggestibility, and the use of mind-altering drugs.

A person's suggestibility is how willing they are to accept and act on suggestions by others. Interrogators seek to increase a subject's suggestibility. Methods used to increase suggestibility may include moderate sleep deprivation, exposure to constant white noise, and using GABAergic drugs such as sodium amytal or sodium thiopental.

Deception can form an important part of effective interrogation. In the United States, there is no law or regulation that forbids the interrogator from lying about the strength of their case, from making misleading statements or from implying that the interviewee has already been implicated in the crime by someone else.[1]

As noted above, traditionally the issue of deception is considered from the perspective of the interrogator engaging in deception towards the individual being interrogated. Recently, work completed regarding effective interview methods used to gather information from individuals who score in the medium to high range on measures of psychopathology and are engaged in deception directed towards the interrogator have appeared in the literature [2] [3] The importance of allowing the psychopathic interviewee to tell one lie after another and not confront until all of the lies have been presented is essential when the goal is to use the interview to expose the improbable statements made during the interview in future court proceedings.

The Reid technique is a trademarked interrogation technique widely used by law enforcement agencies in North America. The technique (which requires interrogators to watch the body language of suspects to detect deceit) has been criticized for being difficult to apply across cultures and eliciting false confessions from innocent people.[4]

Interrogations may involve torture. When torture is employed in interrogation, the first thing the interrogator typically does is to speculate on the type of information s/he would like to extract from the subject. This assists the interrogator in creating a benchmark that the subject must meet in order to end the painful or uncomfortable conditions that occur in torture.

The process of using torture to extract this targeted information may have three possible outcomes. The first is that the subject knows nothing and provides made-up information or a false confession in order to cause the torture to stop; the second is that the subject has the information that the interrogator seeks but is able to "hold out" or divert the interrogators attention with false information (which can be misconstrued for the previous outcome mentioned); and the third is that the subject capitulates under torture and offers the interrogator truthful information. Interrogation has yielded all three results. However, much controversy surrounds the process of torture because of both its human rights implications and the fact that it remains possible that an innocent person can be tortured. When the subject of torture doesn't actually have information or is innocent, the subject may provide a false confession. If not, that individual must bear with the procedures with the knowledge that s/he cannot stop it. Many human rights organizations and political figures have spotlighted these facts. They have pointed out that torture carries the possibility of being ineffective in extracting accurate information. However, this is true of all interrogation techniques.

The debate over these advantages and disadvantages of torture continues to this day. Nonetheless, clarity has been made in the torture debate over the differences between instances of torture that are used in different contexts. To this end, Richard Posner, a judge on the United States Court of Appeals for the Seventh Circuit, has argued, "If torture is the only means of obtaining the information necessary to prevent the detonation of a nuclear bomb in Times Square, torture should be used—and will be used—to obtain the information. ... no one who doubts that this is the case should be in a position of responsibility."[5][6]

Interrogation around the world

British legislation that applies to interrogation activities include:

Training for all personnel engaged in both TQ and DI takes place at the Defence Intelligence and Security Centre, Chicksands.

British military personnel were found to have misused a number of techniques during the detention of suspects in Northern Ireland in the early 1970s. Investigations into these techniques resulted in the publication of policy directives that prohibited the use of hooding, stress positions or wall-standing, noise, sleep deprivation and deprivation of food and drink.

During the early stages of Operation Telic in Iraq during 2003 and 2004 some infantry units have been found to have applied these techniques in contravention of standing orders.

The use of torture is explicitly prohibited however Human Rights Watch and Amnesty International have accused officers of the British Intelligence and Security Services of being at least complicit in the extraction of information from subjects under torture by second parties.

Torture has never been authorized or permitted for use at Guantanamo Bay or any other U.S. Department of Defense detention/internment/prisoner of war facility on any person be they an enemy prisoner of war, detainee, retainee, protected person, lawful or unlawful enemy combatant though there have been people who have reported being tortured at Guantanamo Bay. Several interrogation techniques used at Guantanamo Bay were specifically defined by the Bush administration as "not torture", though most international observers and historical precedent disagree. These techniques include waterboarding, a drowning simulation.

Torture, in this context, is a war crime. Specifically, a grave violation of the Law of Land Warfare. War Crimes are punishable under U.S. Code as well as the U.S. Code of Military Justice. There is no statute of limitations for War Crimes. Instances of criminal behavior by military, civilian, and contract personnel of the U.S. Department of Defense has happened and has happened with regard to Geneva Category prisoners and detainees. Criminal behavior in this context may range from mishandling to abuse to torture. Military Commanders investigate rigorously any accusation of prisoner mishandling, abuse, or torture. The military continues to vigorously prosecute any such unlawful activity.

Army regulations and policy have always been clear, the torture or coercion of an enemy prisoner of war during interrogation, or in any other circumstance, is not only unlawful but also an unproductive and unreliable method for gaining information. In addition, US Army interrogation procedures continue to stress that all detained or captured persons will be treated as Geneva Category Enemy Prisoners of War until determined otherwise by a duly constituted military tribunal.

Resistance training is often a prerequisite for some military personnel since prisoners of war (POWs) routinely undergo interrogation.

Movement for increased recording of interrogations in the US