Richard Allen Posner (born January 11, 1939) is an American jurist, legal theorist, and economist who is currently a judge on the United States Court of Appeals for the Seventh Circuit in Chicago and a Senior Lecturer at the University of Chicago Law School. He is an influential figure in the law and economics school of thought.

Posner has been called "the world’s most distinguished legal scholar."[1] He is the author of nearly 40 books on jurisprudence, economics, and several other topics, including Economic Analysis of Law, The Economics of Justice, The Problems of Jurisprudence, Sex and Reason, Law, Pragmatism and Democracy, and The Crisis of Capitalist Democracy. The Journal of Legal Studies has identified Posner as the most cited legal scholar of the 20th century.[2]

In 1968, Posner accepted a position teaching at Stanford Law School.[3] In 1969, Posner moved to the faculty of the University of Chicago Law School, where he remains a Senior Lecturer and where his son Eric Posner is a Professor. He was a founding editor of the Journal of Legal Studies in 1972.

On October 27, 1981, Posner was nominated by President Ronald Reagan to a seat on the United States Court of Appeals for the Seventh Circuit vacated by Philip Willis Tone.[4] Posner was confirmed by the United States Senate on November 24, 1981, and received his commission on December 1, 1981. He served as Chief Judge of that court from 1993 to 2000, while remaining a part-time professor at the University of Chicago.[4]

Posner is a pragmatist in philosophy, a classical liberal in politics, and an economist in legal methodology. He is a prolific author of articles and books on a wide range of topics including law and economics, law and literature, the federal judiciary, moral theory, intellectual property, antitrust law, public intellectuals, and legal history. He is also well known for writing on a wide variety of current events including the 2000 presidential election recount controversy, President Bill Clinton's affair with Monica Lewinsky[4] and his resulting impeachment procedure, and the 2003 invasion of Iraq. His analysis of the Lewinsky scandal cut across most party and ideological divisions. Posner's greatest influence is through his writings on law and economics—The New York Times called him "one of the most important antitrust scholars of the past half-century." In December 2004, Posner started a joint blog with Nobel Prize-winning economist Gary Becker.[5] He also has a blog at The Atlantic, where he discusses the financial crisis.[6]

Posner was mentioned in 2005 as a potential nominee to replace Sandra Day O'Connor because of his prominence as a scholar and an appellate judge. Robert S. Boynton has written in The Washington Post that he believes Posner will never sit on the Supreme Court because, despite his "obvious brilliance," he has taken a number of "outrageous" positions, such as his contention "that the rule of law is an accidental and dispensable element of legal ideology"; his argument that buying and selling children on the free market would lead to better outcomes than the present situation, government-regulated adoption; and his support for the legalization of marijuana and LSD.[7] 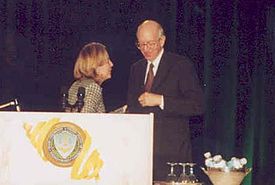 In Posner's youth and in the 1960s as law clerk to William J. Brennan he was generally counted as a liberal. However, in reaction to some of the perceived excesses of the late 1960s, Posner developed a strongly conservative bent. He encountered Chicago School economists Aaron Director and George Stigler while a professor at Stanford.[3] Posner summarized his views on law and economics in his 1973 book The Economic Analysis of Law.[3]

Today, although generally considered a figure of the right, Posner's pragmatism, his qualified moral relativism and moral skepticism,[8] and his affection for the thought of Friedrich Nietzsche set him apart from most American conservatives. Among his other influences are the American jurists Oliver Wendell Holmes, Jr. and Learned Hand.

He has written several opinions sympathetic to abortion rights, including a decision holding "partial-birth abortion" constitutionally protected in some circumstances.[9]

Posner engaged in a debate on the ethics of using animals in research with the philosopher Peter Singer in 2001 at Slate magazine. He argues that animal rights conflicts with the moral relevance of humanity, and that empathy for pain and suffering of animals does not supersede advancing society.[10] He further argues that he trusts his moral intuition until it is shown to be wrong, and that his moral intuition says "it is wrong to give as much weight to a dog's pain as to an infant's pain." He leaves open the possibility that facts on animal and human cognition can and may change his intuition in the future; he further states that people whose opinions were changed by consideration of the ethics presented in Singer's book Animal Liberation failed to see the "radicalism of the ethical vision that powers [their] view on animals, an ethical vision that finds greater value in a healthy pig than in a profoundly retarded child, that commands inflicting a lesser pain on a human being to avert a greater pain to a dog, and that, provided only that a chimpanzee has 1 percent of the mental ability of a normal human being, would require the sacrifice of the human being to save 101 chimpanzees."[10]

Along with Robert Bork, Posner helped shape the antitrust policy changes of the 1970s through his idea that 1960s antitrust laws were in fact making prices higher for the consumer rather than lower, while he viewed lower prices as the essential end goal of any antitrust policy.[3] Posner and Bork's theories on antitrust evolved into the prevailing view in academia and at the Justice Department of the George H.W. Bush Administration.[3]

Posner is "one of the founding fathers of Bluebook abolitionism, having advocated it for almost twenty-five years, ever since his 1986 U of Chicago Law Review article[11] on the subject."[1] In a 2011 Yale Law Journal article,[12] he wrote that:

The Bluebook: A Uniform System of Citation exemplifies hypertrophy in the anthropological sense. It is a monstrous growth, remote from the functional need for legal citation forms, that serves obscure needs of the legal culture and its student subculture.[1]

He has written favorably of efficient breach of contracts.[13] Breach often leads to a worse result for society: if a seller breaches a contract to deliver building materials, the buyer's workers might go idle while the buyer looks for a replacement. The lost production is a cost to the company and its workers and, as such, is a social cost. An efficient breach would be a situation in which the benefits are higher than the costs, because the seller is better off for breaching even after paying damages to the buyer (for instance, if some third party had a much greater need for the building materials, and was willing to pay a price high enough to both out-price the original receiver and offset the realized costs of breach of contract).

He has characterized the U.S.'s "War on Drugs" as "quixotic". In a 2003 CNBC interview, he discussed the difficulty of enforcing criminal marijuana laws and asserted that it is hard to justify the criminalization of marijuana compared to other substances.

Posner supported the creation of a law barring hyperlinks or paraphrasing of copyrighted material as a means to prevent what he views as free riding on newspaper journalism.[14][15][16] His co-blogger Gary Becker simultaneously posted a contrasting opinion that while the Internet might hurt newspapers, it will not harm the vitality of the press, but rather embolden it.[17]

As a judge on the 7th Circuit in Chicago, weighing a challenge to the state’s Eavesdropping Act, which bars the secret recording of conversations without the consent of all the parties to the conversation. At issue was the constitutionality of the Illinois wiretapping law, which makes it illegal to record someone without his consent even when filming public acts like arrests in public. Posner was one of three judges and interrupted the ACLU after just 14 words, stating “Yeah, I know,. But I’m not interested, really, in what you want to do with these recordings of peoples’ encounters with the police.” Posner continued: “Once all this stuff can be recorded, there’s going to be a lot more of this snooping around by reporters and bloggers . . . I’m always suspicious when the civil liberties people start telling the police how to do their business.” [18]

In a dissent from an earlier ruling by his protege Frank Easterbrook, Posner wrote that Easterbrook's decision that female guards could watch male prisoners while in the shower or bathroom must stem from a belief that prisoners are "members of a different species, indeed as a type of vermin, devoid of human dignity and entitled to no respect.... I do not myself consider the 1.5 million inmates of American prisons and jails in that light."[3]

He famously opposed the right of privacy in 1981, arguing that the kinds of interests protected under privacy are not distinctive. He contended that privacy is protected in ways that are economically inefficient.

When reviewing Alan Dershowitz's book, "Why Terrorism Works: Understanding the Threat, Responding to the Challenge", Posner wrote in The New Republic, September 2002 that "If torture is the only means of obtaining the information necessary to prevent the detonation of a nuclear bomb in Times Square, torture should be used—and will be used—to obtain the information. ... no one, who doubts that this is the case, should be in a position of responsibility."[19][20]

Posner is one of the most prolific legal writers, through both the number and topical breadth of his opinions, to say nothing of his scholarly and popular writings.[21] Unlike many judges, he writes all his own opinions.[3] Nobel Laureate economist Robert Solow lavished praise on Posner's fecundity, observing: "he [Posner] is an apparently inexhaustible writer on…nearly everything. To call him a polymath would be a gross understatement. . . Judge Posner evidently writes the way other men breathe."[22]

Aside from the sheer volume of his output, Posner's opinions enjoy great respect from other judges, based on citations, and within the legal academy, where his opinions are taught in many foundational law courses. For example, his opinion in Indiana Harbor Belt Railroad Co. v. American Cyanamid Co., a staple of first year Torts courses taught in American law schools, where the case is used to address the question of when it is better to use negligence liability or strict liability.[23]

In his decision in the 1997 case State Oil Co. v. Khan, Posner wrote that a ruling 1968 antitrust precedent set by the Supreme Court was "moth-eaten", "wobbly", and "unsound".[3] Nevertheless, he abided by the previous decision with his ruling.[3] The Supreme Court granted certiorari and overturned the 1968 ruling unanimously; Sandra Day O'Connor wrote the opinion and spoke positively of both Posner's criticism and his decision to abide by the ruling until the Court decided to change it.[24]

In 1999, Posner was welcomed as a private mediator among the parties involved in the Microsoft antitrust case.[4]

A 2004 poll by Legal Affairs magazine named Posner as one of the top twenty legal thinkers in the U.S.[25]

In 2008, the University of Chicago Law Review published a commemorative issue titled “Commemorating Twenty-five Years of Judge Richard A. Posner."[26] A website, Project Posner, details all of Posner's many legal opinions.[27] It was begun by Posner's former clerk, Tim Wu, who calls Posner "probably America's greatest living jurist."[21] Another of Posner's former legal clerks, Lawrence Lessig, wrote: "There isn't a federal judge I respect more, both as a judge and person."[28] The former dean of Yale Law School, Anthony T. Kronman, said that Posner was "one of the most rational human beings" he had ever met.[3]

The following is a selection of Posner's writings.