Water cure (torture)
This is an article about a form of torture. For other uses, see Water cure. 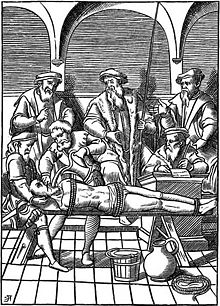 Water cure as a term for a form of torture refers to a method in which the victim is forced to drink large quantities of water in a short time, resulting in gastric distension, water intoxication and possibly death.[1][2][3]

Often the victim has the mouth forced or wedged open, the nose closed with pincers and a funnel or strip of cloth forced down the throat. The victim has to drink all the water (or other liquids such as bile or urine) poured into the funnel to avoid drowning. The stomach fills until near bursting and is sometimes beaten until the victim vomits and the torture begins again.

While this use of water as a form of torture is documented back to at least the 15th century,[4] the first use of the term Water cure in this sense is indirectly dated to around 1898, by U.S. soldiers in the Spanish-American war,[5][a] after the term had been introduced to America in the mid-19th century in the therapeutic sense, which was in widespread use.[6] Indeed, while the torture sense of the term water cure was by 1900-1902 established in the American army,[7][8] with a conscious sense of irony,[9] this sense was not in widespread use. Webster's 1913 dictionary cited only the therapeutic sense.[10] 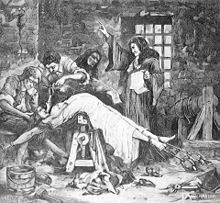 Marquise of Brinvilliers being tortured.

The French poet and criminal François Villon was subjected to this torture in 1461.[11] Jean Calas suffered this torture before being broken on the wheel in 1762.[12] The true case of the Marquise of Brinvilliers was reported in fiction by Arthur Conan Doyle in "The Leather Funnel", by Alexandre Dumas, père in "The Marquise de Brinvilliers" and by Émile Gaboriau in "Intrigues of a Poisoner". More recently, water cure was used by the French military on Algerian prisoners during the Algerian war of independence.

A form of water cure known as the Swedish drink was used by various international troops in the German states during the Thirty Years' War.

Water cure was among the forms of torture used by the Spanish Inquisition. The Inquisition at Málaga subjected the Scottish traveller William Lithgow to this torture, among other methods, in 1620. He described his ordeal in Rare Adventures and Painful Peregrinations (1632):

"The first and second [measures of water] I gladly received, such was the scorching drought of my tormenting pain, and likewise I had drunk none for three days before. But afterward, at the third charge, perceiving these measures of water to be inflicted upon me as tortures, O strangling tortures! I closed my lips, gainstanding that eager crudelity. Whereat the alcalde enraging, set my teeth asunder with a pair of iron cadges, detaining them there, at every several turn, both mainly and manually; whereupon my hunger-clunged belly waxing great, grew drum-like imbolstered: for it being a suffocating pain, in regard of my head hanging downward, and the water reingorging itself in my throat with a struggling force; it strangled and swallowed up my breath from yowling and groaning."[13]

Before pouring the water, torturers often inserted an iron prong (known as the bostezo) into a victim's mouth to keep it open, as well as a strip of linen (known as the toca) on which the victim would choke and suffocate while swallowing the water.[14]

The use of "third degree interrogation" techniques in order to compel confession, ranging from "psychological duress such as prolonged confinement to extreme violence and torture", was widespread in early American policing as late as into the 1930s. Author Daniel G. Lassiter classified the water cure as "orchestrated physical abuse", and described the police technique as a "modern day variation of the method of water torture that was popular during the Middle Ages." The technique employed by the police involved either holding the head in water until almost drowning, or laying on the back and forcing water into the mouth or nostrils.[15]:47 Such techniques were classified as "'covert' third degree torture" since they left no signs of physical abuse, and became popular after 1910 when the direct application of physical violence in order to force a confession became a media issue and some courts began to deny obviously compelled confessions.[16]:42 The publication of this information in 1931 as part of the Wickersham Commission's "Report on Lawlessness in Law Enforcement" led to a decline in the use of third degree police interrogation techniques in the 1930s and 1940s.[16]:38

In 1983 Texas sheriff James Parker and three of his deputies were convicted for conspiring to force confessions. The complaint said they "subject prisoners to a suffocating water torture ordeal in order to coerce confessions. This generally included the placement of a towel over the nose and mouth of the prisoner and the pouring of water in the towel until the prisoner began to move, jerk, or otherwise indicate that he was suffocating and/or drowning."[5] The sheriff was sentenced to ten years in prison, and the deputies to four years.[4][5]

Major Edwin Glenn of the United States was suspended from command for one month and fined $50 for using the water cure. The Army judge advocate said the charges constituted "resort to torture with a view to extort a confession" and recommended disapproval because "the United States cannot afford to sanction the addition of torture."[4] 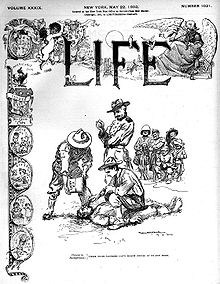 Cartoon on the May 22, 1902 cover of Life magazine depicting American application of the water cure while Europeans watch. The caption reads: "Chorus in background: 'Those pious Yankees can't throw stones at us anymore.'"

Water cure was among the forms of torture used by American soldiers on Filipinos during the Philippine-American War.[17][18][19][20] President Theodore Roosevelt privately assured a friend that the water cure was "an old Filipino method of mild torture. Nobody was seriously damaged whereas the Filipinos had inflicted incredible tortures on our people."[21] The President went further stating "Nevertheless, torture is not a thing that we can tolerate." However, a report at the time noted its lethality; "a soldier who was with General Funston had stated that he helped to administer the water cure to one hundred and sixty natives, all but twenty-six of whom died".[20] See the Lodge Committee for detailed testimony of the use of the water cure.

"A man is thrown down on his back and three or four men sit or stand on his arms and legs and hold him down; and either a gun barrel or a rifle barrel or a carbine barrel or a stick as big as a belaying pin, -- that is, with an inch circumference, -- is simply thrust into his jaws and his jaws are thrust back, and, if possible, a wooden log or stone is put under his head or neck, so he can be held more firmly. In the case of very old men I have seen their teeth fall out, -- I mean when it was done a little roughly. He is simply held down and then water is poured onto his face down his throat and nose from a jar; and that is kept up until the man gives some sign or becomes unconscious. And, when he becomes unconscious, he is simply rolled aside and he is allowed to come to. In almost every case the men have been a little roughly handled. They were rolled aside rudely, so that water was expelled. A man suffers tremendously, there is no doubt about it. His sufferings must be that of a man who is drowning, but cannot drown. ..."[22]

In his book The Forging of the American Empire Sidney Lens recounted:

A reporter for the New York Evening Post (April 8, 1902) gave some harrowing details. The native, he said, is thrown on the ground, his arms and legs pinned down, and head partially raised "so as to make pouring in the water an easier matter". If the prisoner tries to keep his mouth closed, his nose is pinched to cut off the air and force him to open his mouth, or a bamboo stick is put in the opening. In this way water is steadily poured in, one, two, three, four, five gallons, until the body becomes "an object frightful to contemplate". In this condition, of course, speech is impossible, so the water is squeezed out of the victim, sometimes naturally, and sometimes - as a young soldier with a smile told the correspondent - "we jump on them to get it out quick." One or two such treatments and the prisoner either talks or dies.[1]

During World War II, water cure was among the forms of torture used by Japanese troops (especially the Kempeitai) in occupied territory. A report from the postwar International Military Tribunal for the Far East summarized it as follows:

"The so-called 'water treatment' was commonly used. The victim was bound or otherwise secured in a prone position; and water was forced through his mouth and nostrils into his lungs and stomach until he lost consciousness. Pressure was then applied, sometimes by jumping upon his abdomen to force the water out. The usual practice was to revive the victim and successively repeat the process."[23]

The tribunal also reported the case of a prisoner being tortured in the Japanese-occupied Dutch East Indies:

"A towel was fixed under the chin and down over the face. Then many buckets of water were poured into the towel so that the water gradually reached the mouth and rising further eventually also the nostrils, which resulted in his becoming unconscious and collapsing like a person drowned. This procedure was sometimes repeated 5-6 times in succession.[5]

Chase J. Nielson, who was captured in the Doolittle raid testified at the trial of his captors, "I was given several types of torture... I was given what they call the water cure." and it felt "more or less like I was drowning, just gasping between life and death."[5]

The hazing or abusive testing of military recruits, fraternity pledges, or other would-be group members has sometimes included forced ingestion of water or other liquids. This can result in death by water intoxication. California State University Chico student Matthew Carrington died in 2005 trying to become a member of the Chi Tau fraternity.[2] 28-year-old Jennifer Strange of Rancho Cordova, California died of water intoxication after competing in KDND radio's "Hold Your Wee for a Wii" contest.[3]

a. ^ The late 19th century expropriation of the term water cure, already in use in the therapeutic sense, to denote the polar opposite of therapy, namely torture, has the hallmark of arising in the sense of irony. This would be in keeping with some of the reactions to water cure therapy and its promotion, which included not only criticism, but also parody and satire.[24][25]