Trailer where the Combatant Status Review Tribunals were held. The detainee's hands and feet are shackled to a bolt in the floor in front of the white plastic chair.[1][2] Three chairs were reserved for members of the press, but only 37 of the 574 Tribunals were observed.[3]

The Combatant Status Review Tribunals (CSRT) were a set of tribunals for confirming whether detainees held by the United States at the Guantanamo Bay detention camp had been correctly designated as "enemy combatants". The CSRTs were established July 7, 2004 by order of U.S. Deputy Secretary of Defense Paul Wolfowitz[4] after U.S. Supreme Court rulings in Hamdi v. Rumsfeld[5] and Rasul v. Bush s:Combatant Status Review Tribunal (fact sheet of October 17, 2006) and were coordinated through the Office for the Administrative Review of the Detention of Enemy Combatants.

These non-public hearings were conducted as "a formal review of all the information related to a detainee to determine whether each person meets the criteria to be designated as an enemy combatant."[6] The first CSRT hearings began in July 2004. Redacted transcripts of hearings for "high value detainees" were posted to the Department of Defense (DoD) website.[7] As of October 30, 2007, fourteen CSRT transcripts were available on the DoD website.

The CSRTs are not bound by the rules of evidence that would apply in court, and the government’s evidence is presumed to be “genuine and accurate.” The government is required to present all of its relevant evidence, including evidence that tends to negate the detainee’s designation, to the tribunal. Unclassified summaries of relevant evidence may be provided to the detainee. The detainee’s personal representative may view classified information and comment on it to the tribunal to aid in its determination but does not act as an advocate for the detainee. If the tribunal determines that the preponderance of the evidence is insufficient to support a continued designation as “enemy combatant” and its recommendation is approved through the chain of command established for that purpose, the detainee will be informed of that decision upon finalization of transportation arrangements (or earlier, if the task force commander deems it appropriate). The rules do not give a timetable for informing detainees in the event that the tribunal has decided to retain their enemy combatant designations.[8]

"As you will recall, in last June's Supreme Court decision in "Hamdi," Justice O'Connor explicitly suggested that a process based on existing military regulations-- and she specifically cited Army regulation 190-8-- might be sufficient to meet due process standards. You'll also perhaps know that that Army regulation is what the U.S. uses to implement Article 5 of the Geneva Convention that deals with prisoners of war. So [if] our CSRT process incorporates that guidance from Article 5, Army regulation 190-8..."

Thus, the tribunals themselves are modeled after the procedures—AR 190-8 Tribunals—the military uses to make determinations in compliance with the Article 5 of the Third Geneva Convention (that states "Should any doubt arise as to whether persons, having committed a belligerent act and having fallen into the hands of the enemy, belong to any of the categories enumerated in Article 4, such persons shall enjoy the protection of the present Convention until such time as their status has been determined by a competent tribunal.")[10] This is most likely because, in Hamdi v. Rumsfeld, a plurality of the Supreme Court suggested the Department of Defense empanel tribunals similar to the AR 190 to make factual status determinations. The mandate of the CSRTs and the AR 190-8 Tribunals differed in that AR 190-8 Tribunals were authorized to determine that captives were civilians, who should be released, and "lawful combatants", who the Geneva Conventions protect from prosecution..[11] 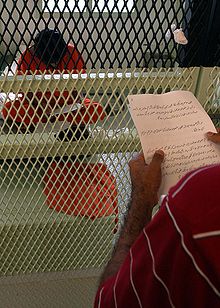 CSRT notice being read to a Guantanamo captive

The exact location of the current CSRT hearings is unknown, but prior CSRT hearings were held in trailers in Guantanamo Bay, Cuba. Images of the trailers, with the white, plastic chairs the detainees sat in shackled to the floor and the large, black leather chair behind a microphone where the President sat can be found on the DoD website.[12]

A dramatization of the conduct of CSRTs, based on CSRT transcripts, is presented in the film The Response.[13]

The identity of the presiding officers at CSRTs hearings is classified. In the CSRT transcripts released on the DoD website, that information has been removed from the transcripts. The ranks of those present, however, and their service branch remain in the documents. For example, at Guleed Hassan Ahmed's CSRT in April 2007, the CSRT President was a Lieutenant Colonel from the U.S. Air Force. Other services present include the U.S. Marine Corps and the U.S. Army; the only other rank mentioned in the transcript was Gunnery Sergeant.[14] In other CSRTs, the ranks, services, and persons present varied. At certain CSRTs, a non-military language analyst was present.

Role of the CSRT Recorder

PRESIDENT:[The]Tribunal has completed its review of the unclassified evidence provided. We do have one question for the Recorder. Is Somalia, Ethiopia, and/or Kenya a coalition partner?
RECORDER: Somalia is not; Ethiopia is; and Kenya is, a coalition partner of the United States.[14]

Role of the Detainee at CSRTs

Detainees had the option of attending their CSRTs, but attendance was not mandated. Some detainees protested the CSRTs by not attending, opting instead to send personal, written statements to be read before the CSRT in their absence. The reading of a detainee's written statement was the task of The Personal Representative, and this occurred, in one case, with Guleed Hassan Ahmed who did not attend his CSRT and instead sent a statement.[14]

When detainees did attend, if required, a translator was typically present to assist the detainee and tribunal members.[15][16] They are given a copy of the unclassified summary of information, and aided by a "Personal Representative".[15]

Presence of Observers at CSRTs

The question of the presence of outside, neutral observers at the CSRTs is debated.

Murat Kurnaz was a young Turk who was born in, and had grown up, in Germany. When captured he was close to being granted German citizenship. He was taken off a tourist bus and detained while on a trip to Pakistan. The tribunal's determination was that there was enough evidence of Kurnaz had ties to terrorism that he should be held as an enemy combatant.

Through a bureaucratic slip-up Kurnaz's file was declassifed. During the brief window when it was declassified the Washington Post was able to review all the evidence against him and publish a summary.[17] Joyce Hens Green, a District of Columbia federal court judge, had been able to review both the classified and unclassified evidence. Green found that Kurnaz's file contained something like 100 pages of documents and reports explaining that German and American investigators could find no evidence whatsoever that Kurnaz had any ties to terrorism. Shortly before his tribunal an unsigned memo had been added to his file concluding he was an al Qaeda member. Green's comment on the memo was that it:

"fails to provide significant details to support its conclusory allegations, does not reveal the sources for its information and is contradicted by other evidence in the record."

"It suggests the procedure is a sham, If a case like that can get through, what it means is that the merest scintilla of evidence against someone would carry the day for the government, even if there's a mountain of evidence on the other side."

It has been suggested these CSR Tribunals are inherently flawed. The principal arguments of why they are inadequate to warrant acceptance as "competent tribunal," are: [18][19]

Some specific cases that call attention to what critics assert is a flawed nature of the CSRT procedure: Mustafa Ait Idir, Moazzam Begg, Murat Kurnaz, Feroz Abbasi, and Martin Mubanga. [17] A comment on the matter by legal experts states:

On June 29, 2006, the Supreme Court of the United States ruled that the Geneva Conventions should be applied, but only Article 3, which does not require a competent tribunal.[22]

The CSRTs are presently on-going, but specific hearings have resulted in a variety of outcomes. Many detainees are still being detained, others have been released to return to their homeland, and still others have been classified and cleared for release but remain at Guantanamo Bay and in U.S. custody because their home countries cannot assure their safety.[23]

According the to prior Secretary of the Navy Gordon England, The basis of detaining captured enemy combatants is not to punish but, rather, to prevent them from continuing to fight against the United States and its coalition partners in the ongoing global war on terrorism. Detention of captured enemy combatants is both allowed and accepted under international law of armed conflict. [9]

In a surprise move President George W. Bush announced the transfer of 14 "high-value detainees" from clandestine CIA custody to military custody in Guantanamo in the fall of 2006.[24] Prior to the transfer legal critics had repeatedly stated that the men in covert CIA custody could never be tried because they had been subjected to abusive interrogation techniques, which would invalidate any evidence that flowed from their interrogations.

Nevertheless, Bush said the transfer would allow the men, most of whom were considered to be members of the inner circle of al Qaeda's senior leadership, to be tried at Guantanamo Bay using the CSRT procedures.

Originally the Bush Presidency asserted that the captives had no right to appeal.[25] Captives who had "next friends" willing to initiate the habeas corpus process filed appeals before the United States Judicial Branch. Rasul v. Bush was the first appeal to make its way to the Supreme Court of the United States. The creation of the Combatant Status Review Tribunals was a side effect of Rasul v. Bush.

Through the Detainee Treatment Act of 2005 and the Military Commissions Act of 2006 the United States Congress moved to first limit, and then completely curtail the captive's ability to file habeas corpus appeals.[25]

The Military Commission Act does provide a process where captives can appeal the Combatant Status Review Tribunal had properly followed OARDEC's own rules when it confirmed their enemy combatant status.[25] If and when captives are able to file these appeals they would be heard before the U.S. Court of Appeals for the D.C. Circuit.

Emma Schwartz, in the US News and World Report, on August 30, 2007, reported that her sources told her: "...Up to one fourth of the department's own civil appellate staff has recently opted out of handling the government's cases against detainee appeals."[25]

Several amalgamated cases have been initiated in the DC Circuit Court.[26] There is controversy over whether the Appeal Court will have access to all the evidence against the captives. As of May 2008 none of the cases has actually come to the point where the judges would consider the merits of the case.

On June 12, 2008 the Supreme Court ruled, in the case Boumediene v. Bush 5-4, that Guantanamo captives were entitled to access the US justice system.[27][28][29][30] Justice Anthony Kennedy wrote in the majority opinion:

"The laws and Constitution are designed to survive, and remain in force, in extraordinary times."

"...the most generous set of procedural protections ever afforded aliens detained by this country as enemy combatants."

Vincent Warren, the executive director of the Center for Constitutional Rights, the organization that initiated the action that triggered the Supreme Court ruling responded[30]:

"The Supreme Court has finally brought an end to one of our nation's most egregious injustices. It has finally given the men held at Guantánamo the justice that they have long deserved. By granting the writ of habeas corpus, the Supreme Court recognizes a rule of law established hundreds of years ago and essential to American jurisprudence since our nation's founding. This six-year-long nightmare is a lesson in how fragile our constitutional protections truly are in the hands of an overzealous executive."