King County is a county located in the U.S. state of Washington. The population in the 2010 census was 1,931,249. King is the most populous county in Washington, and the 14th most populous in the United States.

The county seat is Seattle, which is the state's largest city. About two-thirds of the county's population lives in the city's suburbs. King County ranks among the 100 highest-income counties in the United States.

The county was originally named after William Rufus King who was Vice-President when the Washington Territory was created. In 1986 a motion was introduced by Ron Sims (a black Democrat from Seattle), and Bruce Laing (a white Republican from suburban Renton) to rename the county after Martin Luther King, Jr.[1] No public hearings or votes were taken on the change.[2]

On February 24, 1986, the King County Council passed Council Motion 6461 five votes to four setting forth the historical basis for the renaming of King County in honor of Martin Luther King, Jr.[3] Because only the state can charter counties, this change was not made official until April 19, 2005, when Washington Governor Christine Gregoire signed Senate Bill 5332 into law.

Council member Larry Gossett shepherded the County Council to a public vote on February 27, 2006 to change the county's logo from a royal crown to an image of King's face.[4] On March 12, 2007, the new logo was unveiled.[5]

The county was formed out of territory within Thurston County on December 22, 1852, by the Oregon Territory legislature, and was named after Alabama resident William R. King, Vice President under President Franklin Pierce. Seattle was made the county seat on January 11, 1853.[6][7]

The people of King County voted on September 5, 1911 to create a Port District. King County's Port of Seattle was established as the first Port District in Washington State. The Port of Seattle is King County's only Port District. It is governed by five Port Commissioners, who are elected countywide and serve four-year terms. Now in its 100th year, the Port of Seattle owns and operates many properties on behalf of King County's citizens, including Sea-Tac International Airport; many seaport facilities around Elliott Bay, including its original property, publicly owned Fishermen's Terminal, home to the North Pacific fishing fleet and the largest homeport for fishermen in the U.S. West Coast;[citation needed] four container ship terminals; two cruise ship terminals; the largest grain export terminal in the U.S. Pacific Northwest; three public marinas; 22 public parks; and nearly 5,000 acres of industrial lands in the Ballard-Interbay and Lower Duwamish industrial centers.

King County, which includes Seattle, is a major center for liberal politics and is a bastion for the Democratic Party. In the 2008 election, Barack Obama defeated John McCain in the county by 40%, a larger margin than any previous election. King County has also been the deciding factor for the Democrats in a few recent close statewide elections. In 2000, it was King County that pushed Maria Cantwell's total over that of incumbent Republican Slade Gorton, winning her a seat in the United States Senate. In 2004, King County gave a lead to Democrat Christine Gregoire in the second recount in the state's razor-thin governor's race, pushing her ahead of Republican Dino Rossi, who led by 261 votes after the initial count.[9] Dino Rossi resided in the county at the time of the election in Sammamish.

The suburbs east and south of Seattle have historically tended to be moderate. In the 2005 County Executive race, Republican David Irons beat Democrat Ron Sims outside of Seattle (which voted 74% for Sims), but in 2004, John Kerry received landslide victories in much of the Bellevue and Redmond areas. Generally the suburbs are becoming more liberal on the state and county levels.

In 2004, voters passed a referendum reducing the size of the County Council from 13 members to 9. This resulted in all council seats ending up on the 2005 ballot.

Some residents of eastern King County have long desired to secede and form their own county. This movement was most vocal in the mid-1990s (see Cedar County, Washington).[10][11] It has recently been revived as Cascade County.[12] According to a map published by the Seattle Times,[13] four different geographic borders are being considered. Additional plans (see Skykomish County, Washington) also exist or have existed. 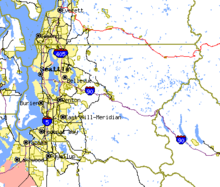 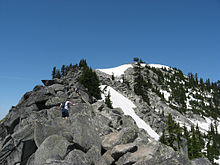 The center of population of Washington in the year 2000 was located in the city of Enumclaw, in King County.[15]

This list may contain communities located entirely within incorporated cities, towns, or CDPs, which should be removed.