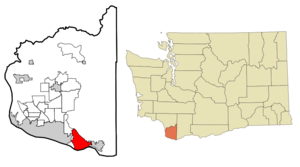 Camas (pronEng|ˈkæməs) is a city in Clark County, , , with a population of 12,534 at the . Officially incorporated on , , the city is named after the , a plant with an onion-like bulb prized by Native Americans. At the west end of downtown Camas is a large paper-mill from which the high school teams get their name "the Papermakers". Historically, the commercial base of the city was based almost solely on the paper mill; however, the diversity of industries has been enhanced considerably in recent years by the influx of several white-collar, high-tech companies including , Sharp Microelectronics, and among others. Annual events include the summer "Camas Days," as well as other festivals and celebrations.

Based on per capita income, Camas ranks 59th of 522 areas in the state of Washington.

Lacamas Park encompasses Round Lake and runs against SR 500 on its west side. Across SR 500 is . The park is open year round from 7 am to and includes s, a play ground, trails around the park and lake, and access to the .

The park features a network of trails which lead to the and the camas lily fields. A 1.2 mile trail that loops around starts and finishes near the . Young may play in a small on the west side of the park. Tables are provided for ing as are waste receptacles designed to receive hot coals from . are made available on a seasonal basis only.

Heritage Park has facilities for launching boats into , a for young , lots of open field, and small trails through the trees. The is very large and includes numerous long parking stalls to accommodate vehicles with trailers.

There were 4,480 households out of which 42.6% had children under the age of 18 living with them, 63.9% were married couples living together, 8.5% had a female householder with no husband present, and 23.6% were non-families. 18.6% of all households were made up of individuals and 6.5% had someone living alone who was 65 years of age or older. The average household size was 2.78 and the average family size was 3.19.

Camas has the following sister cities, according to [http://www.ltgov.wa.gov/International/Washington%20Organizations/Sisters/] and [http://www.sister-cities.org/icrc/directory/usa/WA] :