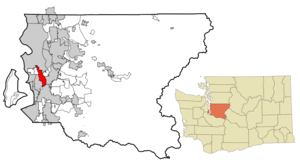 The earliest people in Tukwila were the Duwamish who made their homes along the Black and s. They named Tukwila for the lush forests of hazelnut trees which grew around them. The Duwamish lived in cedar longhouses, hunted and fished, picked wild berries and used the river for trade with neighboring peoples.

In 1853, the area was settled by , a pioneer who had traveled to the northwest from . Foster would become known as the "Father of Tukwila" and serve King County, in the for 22 years. Today, Foster's legendary home on the banks of the Duwammish River is preserved as Park, as it also served as a military base during 1850s Indian Wars. Foster's name is also memorialized in the Foster neighborhood of Tukwila where Foster High School is located.

In the early years of "Foster, Washington", the small village would grow into an agricultural center and a vital trading point in the upper-Duwammish River Valley. Population began to grow as well, and expanded industry would soon follow. Although with the largely farm-oriented commerce in Tukwila, other businesses found fertile land in which to grow from.

Early electric rail trains traveled along Interurban Avenue in Tukwila, connecting to Renton and a line to . The Interurban Railroad operated a commuter line from 1902 to 1928, making it possible to travel from Seattle to Tacoma in less than an hour. The first paved road in Washington State was in Tukwila and bears the name of this new method of street paving. One of the earliest paved military roads is located in the city.

Tukwila was incorporated as a city in 1908.

There were 7,186 households out of which 28.2% had children under the age of 18 living with them, 36.4% were married couples living together, 12.4% had a female householder with no husband present, and 45.0% were non-families. 34.3% of all households were made up of individuals and 5.6% had someone living alone who was 65 years of age or older. The average household size was 2.38 and the average family size was 3.09.

has long been associated with Tukwila via media-fueled stereotypes and other means of publication. has been (and continues to be) an issue in the last decades, with city leaders struggling to find good solutions for the vicious cycle that poverty and homelessness create. In recent years however, the city and local churches have taken a different approach to dealing with the matters of poverty. In 2003 and 2004, Riverton Park United Methodist Church located in northeast Cascade View, Tukwila and The Church by the Side of the Road located in south Cascade View hosted controversial homeless camp . And since 2003, city government has increased poverty-ending oriented legislation to further resolve issues.

Tukwila’s location at the confluence of rivers, freeways and railroads has determined its destiny as a center of commerce. (formerly Southcenter Mall), Puget Sound's largest shopping complex, is located in Tukwila, as well as a number of corporation facilities. Tukwila is also the location of several Internet and Corporate datacenters, including Microsoft, InterNAP, The University of Washington, Savvis, AboveNet, [http://www.forest.net] digital.forest, HopOne, and Fortress Colocation, these are mostly located in [http://www.sabey.com] Sabey Corporation's Intergate.Seattle campus near Boeing Field. It is only 5 minutes from . Approximately 45,000 people work in Tukwila every day, while only about 17,000 live there.