/ˈjækɨmɔː/ or /ˈjækɨmə/) is an American city southeast of Mount Rainier National Park and the county seat of Yakima County, Washington, United States, and the eighth largest city by population in the state itself. As of the 2010 census, the city had a total population of 91,196 and a metropolitan population of 243,231.[3] In addition, the unincorporated suburban areas of West Valley and Terrace Heights are considered a part of greater Yakima. With these cities included in the immediate area, population within 20 miles of the city is over 123,000.[4] According to the Washington State Office of Financial Management's July 1, 2008 estimate, the city has a population of 84,074.[5] Yakima is situated in the Yakima Valley, which is noted for being one of the best apple-producing areas in the world, a major wine region and produces approximately 75% of all hops grown in the USA.[6] The name originates from the Yakama Nation. The Yakama Indian Reservation is located to the south and southeast of the city of Yakima. 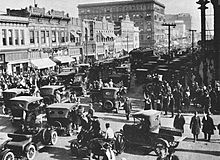 The Yakama people were the first known inhabitants of the Yakima area, inhabiting the Yakima Valley. In 1805, the Lewis and Clark Expedition came to the area and discovered abundant wildlife and rich soil, prompting the settlement of homesteaders.[7] A Catholic Mission was established in Ahtanum, southwest of present-day Yakima, in 1847.[8] The arrival of settlers and their conflicts with the natives resulted in the Yakama Indian War of 1855. The U.S. Army established Fort Simcoe in 1856 near present-day White Swan as a response to the uprising. The Yakamas were defeated and relocated to the Yakama Indian Reservation. Yakima County was created in 1865. When bypassed by the Northern Pacific Railroad in December 1884, over 100 buildings were moved with rollers and horse teams to the nearby site of the depot. The new city was dubbed North Yakima and was officially incorporated and named the county seat on January 27, 1886. The name was changed to Yakima in 1918. Union Gap was the new name given to the original site of Yakima.

Yakima, Washington as seen from the west.

The cities of Selah and Union Gap lie immediately to the north and south of Yakima. In addition, the unincorporated suburban areas of West Valley and Terrace Heights are considered a part of greater Yakima. With these cities included in the immediate area, population within 20 miles of the city is over 123,000. Other nearby cities include Moxee, Tieton, Cowiche, Wiley City, Tampico, Gleed, and Naches in the Upper Valley, as well as Wapato, Toppenish, Zillah, Harrah, White Swan, Parker, Buena, Outlook, Granger, Mabton, Sunnyside, and Grandview in the Lower Valley. As of 2006, the estimated population of the metropolitan area is 233,105.

The primary irrigation source for the Yakima Valley, the Yakima River, runs through Yakima from its source at Lake Keechelus in the Cascade Range to the Columbia River at Richland. In Yakima, the river is used for both fishing and recreation. A 10-mile (16 km) walking and cycling trail, a park, and a wildlife sanctuary are located at the river's edge.

The Naches River forms the northern border of the city. Several small lakes flank the northern edge of the city, including Myron Lake, Lake Aspen, Bergland Lake (private) and Rotary Lake (also known as Freeway Lake). These lakes are popular with fishermen and swimmers during the summer.

Cultural activities and events take place throughout the year. The Yakima Valley Museum houses exhibits related to the region’s geology and history, a restored soda fountain, and periodic special exhibitions. Downtown Yakima’s historic Capitol Theatre and Seasons Performance Hall, as well as the West-side’s Allied Arts Center, present numerous musical and stage productions. The city is home to the Yakima Symphony Orchestra. The Yakima Area Arboretum is a botanical garden featuring species of both native and adapted non-native plants. Popular music tours, trade shows, and other large events are hosted at the Yakima SunDome in State Fair Park.

In 1994, the City of Yakima received the All-America City Award, given by the National Civic League. Ten U.S. cities receive this award per year.

The Sun Dome is the home to the Warriors.

Interstate 82 is the primary way of reaching Yakima, but U.S. Route 12 crosses through the city from White Pass. U.S. Route 97 joins I-82 from Yakima for approximately 40 miles (64 km) north to Ellensburg. State Route 24 terminates at Yakima and is the primary means of reaching Moxee City and many of the area's agricultural areas to the east. State Route 821 terminates near Yakima and is also called Canyon Road because it passes through the Yakima River canyon. It is an alternate route to Ellensburg which bypasses the I-82 summit at Manastash Ridge.

Yakima's airport, McAllister Field, operates commercial air flights via Horizon Air to Seattle. Numerous private aircraft call the Yakima Airport home and several freight companies operate out of the airport. It is also a popular test site for military jets and Boeing Commercial Airplanes test flights. Located on the field is Cub Crafters, rebuilder of Piper Super Cubs for over 30 years, and a current FAR23 and Light Sport Aircraft manufacturer.

Yakima's growth in the 20th century was fueled primarily by agriculture. The Yakima Valley produces many fruit crops, including apples, peaches, pears, cherries, and melons. Many vegetables are also produced, including peppers, corn and beans. Many of the city's residents have come to the Valley out of economic necessity and to participate in the picking, processing, marketing and support services for the agricultural economy.

Downtown Yakima, along the retail hub of the region, has undergone many changes since the late 1990s. Three major department stores and an entire shopping mall that is now closed for business, have been replaced with Whirlpool Corporation and Adaptis call-centers and several hotels.

The retail core of the region has since shifted to the city of Union Gap, where a renovated shopping mall and other new retail businesses are flourishing. While some see big-box retail leaving the downtown area as a loss, others see it as an opportunity to recast the downtown area as a center for events, services, entertainment, and smaller, more personal shopping experiences. One part of this effort has been the Downtown Futures Initiative.[14] The DFI has provided for a street to storefront remodel along Yakima Avenue throughout the entire downtown core, and includes new pedestrian-friendly lighting, water fountains, planters, banner poles, new trees and hanging baskets, all of which complement the new paver-inlaid sidewalks.

The early 2000s have seen the return of the Sports Center Tavern, a local landmark, to Downtown Yakima, as well as the opening of The Hilton Garden Inn (built in the same location as one of the former anchor stores of the closed Yakima Mall), The Speakeasy Bar, Grill & Nightclub, Kana Winery, Donitelia Winery, Yakima Cellars Winery, Seasons Performance Hall, Essencia Bakery, De Siga Gallery, and The Barrel House. Developers have completed the Lofts condominiums in the former Bon Marche building, also once an anchor of the Yakima Mall.[15]

The Japan Ground Self Defense Force conducts training annually in Yakima. Japanese soldiers train in Yakima because it allows for large-scale live fire maneuvers not available in Japan.

In the early 2000's, the city of Yakima in conjunction with multiple city organizations has begun revitalization and preservation efforts in Downtown Yakima, formerly North Yakima. According to the City of Yakima, the Downtown Yakima Futures Initiative is in progress. This organization has tasked themselves with “making strategic public investments in sidewalks, lighting, landscaping. Those public investments will serve as economic development catalysts resulting in the further enhancement of the area by downtown business and property owners.” Out of four phases, one is completed. [1] Local businesses featuring regional produce, wines, and beers among other products are returning to the downtown area. These can be found at numerous restaurants and shops mainly on Front Street, Yakima Avenue, 1st Street and they include Track 29 across from the old Train Depot, the Barrel House Restaurant [2], Gilbert Cellars [3] located in the historic Lund Building as well as the historic Capitol Theater and Larson Buildings. [4] One tourist attraction is a pair of historic trolleys that operates each summer along five miles (8 km) of tracks of the former Yakima Valley Transportation Company through the Yakima Gap connecting Yakima and Selah. The Yakima Valley Trolleys organization was incorporated in 2001 to operate the railroad for the City of Yakima. Present and future generations are able to experience an early-American street railway almost exactly as it was 100 years ago and come to understand the important role transit held in developing the City of Yakima as well as the rest of the industrialized world. 2010

The city of Yakima is served in the field of education by three K-12 public school districts, several private schools, and three post-secondary schools.

There are five high schools in the Yakima School District.

Yakima is home to over 250 homeschooling families, and CAPE, the Christian Association of Parent Education, established in 1981, is a 501c(3) nonprofit organization and the central resource group for several co-operative learning groups, as well as hosting an annual Family Learning Conference and field trips.

Yakima Organized Unschoolers, The Yakima chapter of Unschooling United is a support group for Unschooling families and welcomes unschoolers regardless of their religious affiliation.

The Pacific Northwest University of Health Sciences was completed in 2008. The university is home for nine to eleven health science related colleges. The first college on the 42.5-acre (172,000 m2) campus is home to the first medical school approved in the Pacific Northwest in over sixty years and trains physicians with an osteopathic emphasis. The mission of the medical school is to train primary care physicians who are committed to serving the rural and underserved communities throughout the Pacific Northwest. The college is housed in a state-of-the-art 45,000-square-foot (4,200 m2) facility.[18] It opened in the fall of 2008.[19]

Due to its rather humorous-sounding name, Yakima has been used in a number of productions