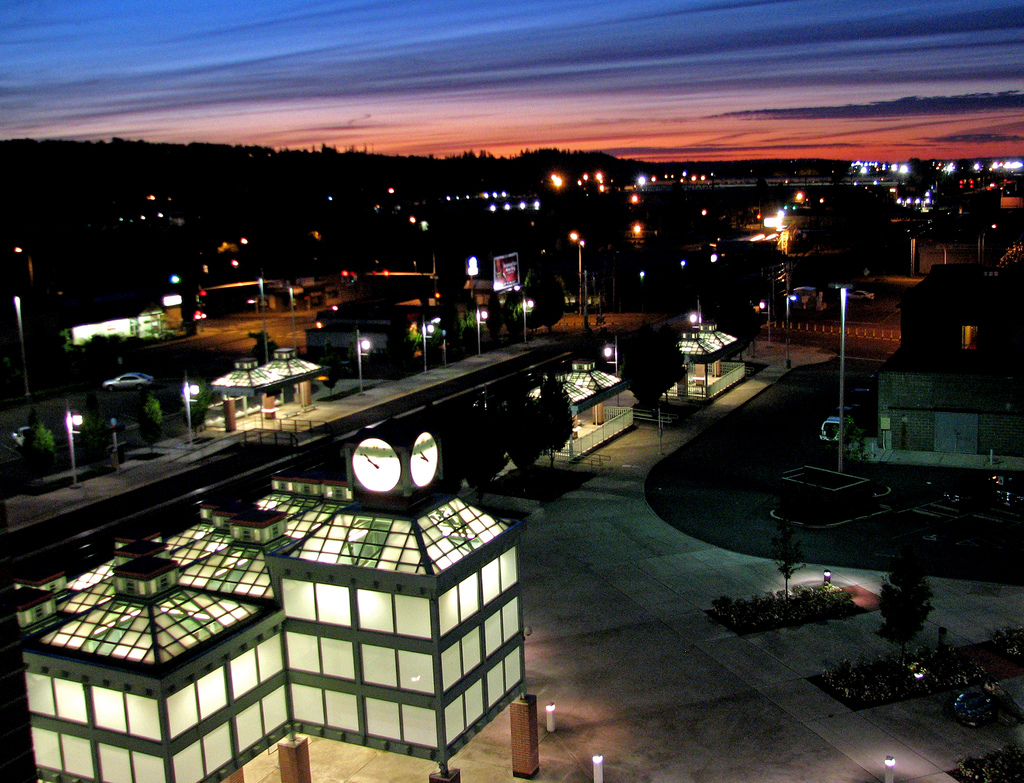 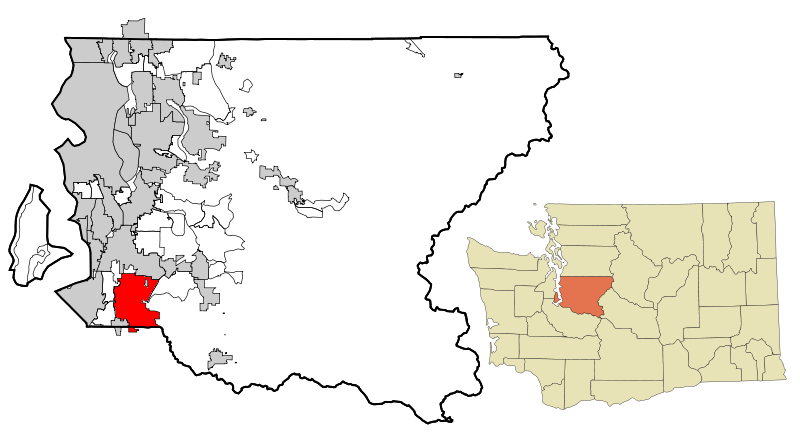 Auburn is a city of 67,732 (2008) located in the of , in King County with some spill-over into Pierce County. Currently ranked 13th largest city in the state, and 3rd in South King County. Though founded before either Seattle or Tacoma () had s, Auburn is now often thought of as a suburb of these two cities. Auburn is roughly bordered by the s of Federal Way, Pacific, and Algona to the west, Sumner to the south, unincorporated King County to the east, and Kent to the north. The Muckleshoot Indian Reservation is nearby.

Auburn is located at coor dms|47|18|8|N|122|12|53|W|city (47.302322, -122.214779)GR|1.The city is generally placed into these three areas. , , Lakeland Hills, and the ‘Valley’.The Valley neighbourhoods include, historic downtown, North Auburn, Hazel Wood, the Terminal Park neighbourhood, Game Farm, and the to the greater extent the general Muckleshoot area. In addition the city also boosts a remarkable view of , from almost any point within the city.

Two rivers, the White River and, to a greater extent, the Green River flow through Auburn.

Historically, the Stuck River ran through the settlement of Stuck, which is now a small pocket of unincorporated King County within southern Auburn. In 1906, the flow of the White River was diverted into the Stuck's channel near today's Game Farm Park. [http://www.wrvmuseum.org/journal/journal_0403.htm] References to the Stuck River still appear in some property legal descriptions [http://www5.metrokc.gov/reports/property_report.asp?PIN=6655000025] and place names, e.g. Stuck River Drive, within Auburn, but today it is essentially indistinguishable from the southern .

Auburn has many large roads nearby and within city limits, including SR 167 commonly referred as the "Valley Freeway", and SR 18. Auburn also has it’s own Transit Center, Auburn Station, making it a central gateway key to access with to the entire area, and was up until the mid 60’s home to Northern Pacific's, (now ) central roundhouse [ [http://content-dev.lib.washington.edu/cgi-bin/pview.exe?CISOROOT=/imlswrvm&CISOPTR=400&CISORESTMP=/imls/templates/wrvm_results.html&CISOVIEWTMP=/imls/templates/wrvm_view.html&CISOROWS=3&CISOCOLS=4 Northern Santa Fe central roundhouse] ] . In addition, the Auburn Municipal Airport [ [http://www.s50wa.com/] ] serves the general aviation community.

Auburn has an extensive system of parks, open space and urban trails comprising 28 developed parks, 5 undeveloped sites under planning, 2 skates parks, and over convert|23|mi|km of trails (including Auburn's convert|4.5|mi|km|sing=on portion of the Inter-urban Trail for bikers, walkers, runners and skaters), and almost convert|247|acre|km2 of open space for passive and active recreation.

The Auburn Environmental Park (AEP) Project is an innovative project that seeks to create open space in an urbanized area while offering opportunities for economic development, water quality improvement, stormwater detention and flood control, fish and wildlife enhancement, public education, and recreation, including hiking trails and bird viewing amenities. Located between 167, West main, and the Interurban Trail, the city is begging construction on one birdwatching tower,with 4 planned, and an extensive trail system also under way. [http://www.ci.auburn.wa.us/planning_community/environmental_park.asp]

There were 16,108 households out of which 32.8% had children under the age of 18 living with them, 43.7% were married couples living together, 13.4% had a female householder with no husband present, and 37.6% were non-families. 29.1% of all households were made up of individuals and 9.1% had someone living alone who was 65 years of age or older. The average household size was 2.47 and the average family size was 3.05.

The city of Auburn is a government mayor-council form, the current Mayor is Pete Lewis, who is in his second term in office.He is a member of the [cite web| url=http://www.mayorsagainstillegalguns.org/html/about/members.shtml| title=Mayors Against Illegal Guns: Coalition Members] , a group with a stated goal of "making the public safer by getting illegal guns off the streets." The Coalition is co-chaired by Mayor and Mayor .

With some of the most available and affordable land in the lower area [http://www.ci.auburn.wa.us/economic_dev/index.asp/] , local business of notice include;

The Auburn Plant, which opened in 1966 is the [cite web|url=http://www.boeing.com/news/frontiers/archive/2004/october/i_ca1a.html| title=Boeing Frontiers Online Source] with 2.1 million square feet and 265,000 parts being manufactured each year. With 11,000 employees, the Boeing plant is the 3rd major employer in Auburn.

Auburn was originally incorporated as "Slaughter," named after William Slaughter, who died in an Indian skirmish in 1855. At the time, the main hotel in town was called the "Slaughter House." In 1893, a large group of settlers from moved to Slaughter, and renamed the town to "Auburn." [http://www.auburnrealestate.net] Due to this history, when Auburn was building its second high school in the mid-1990s, there was a grass-roots effort to name the high school "Slaughter High School," but it was eventually decided that the name would be too politically incorrect, and the High School was named "Auburn Riverside High School," whose mascot is the Raven. There are several locations in Auburn on the National and State Registers of Historic Places, such as the .

The city of Auburn, located convert|20|mi|km south of Seattle, was home to some of the earliest settlers in King County. Nestled in a fertile river valley, Auburn has been both a farm community and a center of business and industry for more than 150 years. Auburn is located near the original confluence of the Green and White rivers, both of which contain runoff water from the Cascade Mountain range. The valley was originally the home of the Skopamish, Smalhkamish, and Stkamish Indian tribes. The first white men in the region were explorers and traders who arrived in the 1830s.

Settlers first came to the valley in the 1850s. On , an Indian ambush killed nine people, including women and children. In November, a military unit led by Lieutenant William Slaughter camped near what is now present-day Auburn. On , a group of Indians attacked, killing Lt. Slaughter and two other men.

A new treaty was written which provided the establishment of the Muckleshoot reservation, which is the only Indian reservation now within the boundaries of King County. The White River tribes collectively became known as the Muckleshoot tribe.

White settlers, the Neely and Ballard families began returning to the area. In 1891, the town of Slaughter incorporated. Although many older citizens considered the town's name as a memorial, many newer residents understandably felt uncomfortable with it. Within two years, the town was renamed Auburn, taken from the first line of Oliver Goldsmith's poem, The Deserted Village: "Sweet Auburn! Loveliest village of the plain."

Auburn had been a bustling center for hop farming until 1890 when the crops were destroyed by aphids. After that, the farms were mostly dairy farms and berry farms. Nevertheless, flooding was still a problem for Auburn farmers up until the Howard Hanson Dam was built in 1962. This dam on the Green River, along with the Mud Mountain Dam on the White River, provided controlled river management, which left the valley nearly flood-free. Another impetus to Auburn's growth was the railroad. The Northern Pacific Railroad put a rail line through town in 1883, but it was the Seattle-Tacoma Interurban line that allowed easy access to both cities starting in 1902. The Interurban allowed farmers to get their product to the markets within hours after harvest. The railroad, along with better roads, caused many new companies to set up business in Auburn, among them the Borden Condensery (which made Borden's Condensed Milk) and the Northern Clay Company.

Auburn grew through the twentieth century like many American towns. The 1920s were prosperous for citizens, but the Great Depression of the 1930s left many in need. World War II brought great hardship to many local Japanese farmers when they were moved to internment camps and their land taken from them. At the same time, local boys were sent to fight in the Pacific, and some died in battle.

The postwar era was prosperous to Auburn, bringing more businesses and a community college to the city. In 1963, The Boeing Company built a large facility to mill sheet metal skin for jet airliners. As time went on, many farms disappeared as the land was converted to industrial use. In 1995, was built in the valley, enticing consumers from all over the Puget Sound region.

Auburn has made the transition from small farms to large industries, but much of the city's history remains. A monument in the memory of Lieutenant Slaughter, erected in 1918, still stands in a local park. The Neely Mansion, built by the son of a pioneer in 1891, has been refurbished and is listed on the National Register of Historic Places. Auburn's downtown still maintains a "Main Street U.S.A" appearance.

The SuperMall of the Great Northwest

The Supermall, which opened in August, 1995, is often considered to be the largest outlet mall in South King county. Located between the junction of Highway 167 and Highway 18, the mall is strategically placed, for ease of access.Anchor tenants who occupy lease space in the mall include:

*
*
*
*
*
* Surrounding the mall is a local , a Regal Theater with 17 screens, the plant of Auburn, and various other commercial businesses. The nearby recently-constructed distribution center was featured in the episode 'Supermarkets'.

Muckleshoot Casino [http://www.muckleshootcasino.com/] & Bingo, commonly known for its slogan, "The Biggest and Best in the Northwest!" is an Indian-run casino, located on the Muckleshoot Reservation. In addition to being one of the largest casinos in the Pacific Northwest, it is one of the few left in the state that allows smoking. All money made in the casino directly benefits the Muckleshoot Tribal Community, providing education and low-cost health care for tribal residents.

Washington’s only Class One thoroughbred racetrack. A magnificent convert|167|acre|km2|sing=on facility, this premiere track offers the finest in racing excitement for fans of all ages. The Northwest's best thoroughbreds can be found racing on the Auburn oval, while Mount Rainier provides a stunning backdrop. Emerald Downs' six-level stadium is focused on the finish line. [http://www.emeralddowns.com/]

The White River Amphitheater is 20,000-seat venue, located right on the edge of Auburn city limits. The theater presents world-class acts against a spectacular backdrop of Mt. Rainier. Of the 20,000 capacity, approximately 9,600 seats are under the amphitheater roof. There is ample parking and diverse food and beverage service on The Plaza. The site also houses the River Lodge (a convert|6000|sqft|m2|sing=on lounge), the Bear and Wolf Houses (all ages cafes), and four separate restroom buildings. Free shuttle service is available to the amphitheater from the SuperMall Red Robin for every show. White River offers an outstanding VIP experience for companies and individuals looking to entertain friends, family and clients. The VIP Program includes exceptional seating and first class amenities.

This award-winning museum’s exhibits tell the story of Auburn, from Native American history to the 1920s. They focus on the Muckleshoot Indian Tribe, pioneer life, immigration from Europe and Japan, truck farming, railroading and the building of towns throughout the area. Visitors get to wander into a pioneer cabin, climb aboard a Northern Pacific caboose, and investigate the shops in 1924 downtown Auburn. [http://www.wrvmuseum.org/]

* grew up in Auburn, she attended both Cascade Middle School, and . Gregoire is the current Washington State Governor.

* is former King County Sheriff and a current representative from . Reichert was in charge of the task force responsible for the search and capture of the .

* born and raised in Auburn, he grew up to become a professional boxer. Gained 4 championship belts and holds record for highest number in attendance for a single fight against

*Commander Dick Scobee attended school and briefly lived in Auburn, originally attending North Auburn Elementary. After the Challenger accident, the school was renamed in his honor. (Commander Astronaut of the .)

* professional basketball player, selected 1st round (15th overall) in the 1985 NBA Draft by the .

* a comic artist who created the online comics.

*, a pioneering hip hop artist with the track ; he visits the Auburn about once a month

* actor best known from the movie As Ryan

Several Rock bands receiving national attention and recognition have sprung from the Auburn area. Bands with members from Auburn include: New American Shame, The Mechanical Dolls, Four Counts Dirty, The Green Off the Box, Champion, Jude Dugan and others.

Currently the has 14 elementary schools, 4 middle schools and 4 high schools, making 22 schools in all. The district's newest school is Arthur Jacobsen Elementary. The District is larger than the city itself, serving the neighbouring towns of and as well as some unincorporated areas around Auburn, and .

In addition to the , also resides in Auburn, atop Lea Hill.

Auburn has one sister city, according to [http://www.ltgov.wa.gov/International/Washington%20Organizations/Sisters/] and [http://www.sister-cities.org/icrc/directory/usa/WA] :
* ,