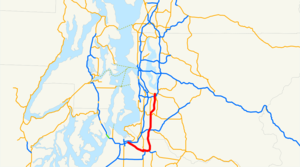 State Route 167, commonly known as the Valley Freeway, is a in the of . It connects Interstate 5 in Tacoma with Interstate 405 in Renton, and is convert|28.60|mi|km long.

SR 167 runs east as a four-lane divided (only by a left-turn lane) highway from Interstate 5 in Tacoma along the 's south bank into Puyallup. SR 167 crosses the Puyallup River. Just north of the river, SR 167 turns east onto a freeway at a partial interchange. SR 167 begins a brief concurrency with SR 161 at this interchange. The freeway continues east towards Sumner. SR 161 leaves SR 167 at an interchange with State Route 512, which goes south. SR 167 continues east and meets State Route 410 at an interchange. [cite map|publisher=Thomas Bros. Maps|title=Pacific Northwest Road Atlas|edition=6th|year=2004|page=182|section=B3|isbn=0528995111] The highway then turns north, and has a large interchange with State Route 18 in Auburn near the . [cite map |publisher=Rand McNally |title=The Road Atlas |year=2006 |page=110 |section=K9 |isbn=0528957902] North of Auburn, the freeway has (HOV) lanes. There is a project underway to convert these HOV lanes to (HOT) lanes. [ [http://www.wsdot.wa.gov/Projects/SR167/HOTLanes/ WSDOT: SR167 HOT Lanes Pilot Project] ]

When Washington's current numbering system was developed with the 1964 renumbering, State Route 167 followed what is now State Route 164 from Enumclaw to Auburn before turning north towards Renton and Seattle. What is now SR 167 between Tacoma and Auburn was numbered SR 410 between Tacoma and Sumner, and State Route 163 between Sumner and Auburn. [, [http://www.wsdot.wa.gov/Library/History.htm Identification of State Highways] , , ] These highways were renumbered to their current designations in 1973. [Session Laws of the State of Washington. 1973 (1st extraordinary session) chapter 151.] The highway between Renton and Seattle was removed from the state highway system in 1991, although the law did not take effect until , . [cite WAstat|year=1991|ch=342]

WSDOT plans to convert the entire route in Pierce County to a . [ [http://www.wsdot.wa.gov/Projects/SR167/TacomaToEdgewood/ WSDOT: SR167 Tacoma to Edgewood new freeway] ] WSDOT is performing advance design and engineering work. The proposed highway would bypass the snarled traffic at Meridian Way in Puyallup and continue across Interstate 5 to SR 509 in the city of Fife. The project would construct a new six mile (10 km) freeway north of the Puyallup River and complete the partial interchange at Meridian Way (SR 161). The new freeway would be four lanes with adequate space for future HOV lanes. The interchange with I-5 would have direct access HOV ramps. The upgraded SR 167 would save time travelling from Tacoma to Puyallup, as the original highway is just a four-lane road with at-grade intersections and a speed limit of convert|50|mi/h|km/h|abbr=on. It would also, in theory, complete the gap of a bypass to I-5 between Renton and Tacoma. SR 512 currently provides a freeway bypass of I-5 between Puyallup and Tacoma.