The city of Bern or Berne (German: Bern, pronounced [ˈbɛrn] (

The official language of Bern is German, but the main spoken language is the Alemannic dialect called Bernese German.

In 1983 the historic old town in the centre of Bern became a UNESCO World Heritage Site, and Bern is ranked among the world’s top ten cities for the best quality of life (2010).[7]

The etymology of the name Bern is uncertain. According to the local legend, based on folk etymology, Berchtold V, Duke of Zähringen, the founder of the city of Bern, vowed to name the city after the first animal he met on the hunt, and this turned out to be a bear. It has long been considered likely that the city was named after the Italian city of Verona, which at the time was known as Bern in Middle High German. As a result of the find of the Bern zinc tablet in the 1980, it is now more common to assume that the city was named after a pre-existing toponym of celtic origin, possibly *berna "cleft".[8] The bear was the heraldic animal of the seal and coat of arms of Bern from at least the 1220s. The earliest reference to the keeping of live bears in the Bärengraben dates to the 1440s.

The construction of the Untertor-bridge in Bern, Tschachtlanchronik, late 15th century

No archaeological evidence that indicates a settlement on the site of today′s city centre prior to the 12th century has been found so far. In antiquity, a celtic oppidum stood on the “Engehalbinsel” north of Bern, fortified since the 2nd century BC (late La Tène period), thought to be one of the twelve oppida of the Helvetii mentioned by Caesar. During the Roman era, there was a Gallo-roman vicus on the same site. The Bern zinc tablet has the name Brenodor "dwelling of Breno". In the Early Middle Ages, there was a settlement in Bümpliz, now a city district of Bern, some 4 km (2 mi) from the medieval city.

The medieval city is a foundation of the Zähringer ruling family, which rose to power in Upper Burgundy in the 12th century. According to 14th century historiography (Cronica de Berno, 1309), Bern was founded in 1191 by Berthold V, Duke of Zähringen.

In 1218, after Berthold died without an heir, Bern was made a free imperial city by the Holy Roman Emperor Frederick II.

In 1353 Bern joined the Swiss Confederacy, becoming one of the "eight cantons" of the formative period of 1353 to 1481. Bern was invaded and conquered Aargau in 1415 and Vaud in 1536, as well as other smaller territories, thereby becoming the largest city-state north of the Alps, by the 18th century comprising most of what is today the canton of Berne and the canton of Vaud.

The city grew out towards the west of the boundaries of the peninsula formed by the river Aare. Initially, the Zytglogge tower marked the western boundary of the city from 1191 until 1256, when the Käfigturm took over this role until 1345, which, in turn, was then succeeded by the Christoffelturm (located close to today's train station) until 1622. During the time of the Thirty Years' War two new fortifications, the so-called big and small Schanze (entrenchment), were built to protect the whole area of the peninsula.

Bern was occupied by French troops in 1798 during the French Revolutionary Wars, when it was stripped of parts of its territories. It regained the Bernese Oberland in 1802, and following the Congress of Vienna of 1814 newly acquired the Bernese Jura, once again becoming the largest canton of the confederacy as it stood during the Restoration, and further until the secession of the canton of Jura in 1979. In 1848 Bern was made the Federal City (seat of the Federal Assembly) of the new Swiss federal state.

A number of congresses of the socialist First and Second Internationals were held in Bern, particularly during World War I when Switzerland was neutral; see Bern International. 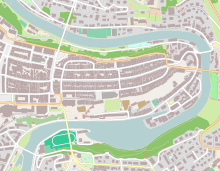 The city was originally built on a hilly peninsula surrounded by the river Aare, but outgrew the natural boundaries by the 19th century. A number of bridges have been built to allow the city to expand beyond the Aare.

Bern is built on very uneven ground. There are several dozen metres in difference of height between the inner city districts on the Aare (Matte, Marzili) and the higher ones (Kirchenfeld, Länggasse).

Of the built up area, 3.6% consists of industrial buildings, 21.7% housing and other buildings, and 12.6% is devoted to transportation infrastructure. Power and water infrastructure as well as other special developed areas made up 1.1% of the city, while another 6.0% consists of parks, green belts and sports fields. 32.8% of the total land area is heavily forested. Of the agricultural land, 14.3% is used for growing crops and 4.0% is designated to be used as pastures. The rivers and streams provide all the water in the municipality.[10]

The municipality is administratively subdivided into six districts (Stadtteile), each of which consists of several quarters (Quartiere).

The Swiss population is generally well educated. In Bern about 72.8% of the population (between age 25–64) have completed either non-mandatory upper secondary education or additional higher education (either University or a Fachhochschule). 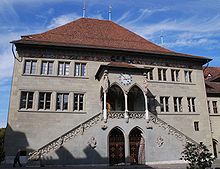 Bern is governed by the Gemeinderat, an executive council with five members, one of them the elected mayor (Stadtpräsident). The parliament has 80 members and is called Stadtrat. Both the legislative and the executive are elected in general elections for a term of four years. The last elections were held in November 2008 with a 43.48% participation.

The executive council has a left-green majority with two representatives, including the mayor Alexander Tschäppät, of the Social Democratic Party of Switzerland (SPS) and one representative of the leftist Green party Grünes Bündnis (GB). It also has a majority of three women against two men.

The 80 members of the legislative council belong to 18 different political parties, the strongest being the Social Democratic Party with 20 representatives, followed by the conservative Free Democratic Party of Switzerland (FDP) with 10 and the moderate Green party Grüne Freien Liste (GFL) with 9 seats. Both the far right Swiss People's Party (SVP) and the leftist Green party Grünes Bündnis have 8 seats each.

The Stadtrat meets on Thursday evenings at the Rathaus (Town Hall).

The representatives of the Social Democratic Party and of the Green Parties, collectively referred to as "Red-Green-Center" (Rot-Grüne-Mitte), hold a majority in both councils and mostly determine City policy, although no formal coalition agreement exists and, under the system of direct democracy that prevails in Switzerland, most important issues are settled by general vote.

The structure of Bern's city centre is largely medieval and has been recognised by UNESCO as a Cultural World Heritage Site. Perhaps its most famous sight is the Zytglogge (Bernese German for "Time Bell"), an elaborate medieval clock tower with moving puppets. It also has an impressive 15th century Gothic cathedral, the Münster, and a 15th century town hall. Thanks to 6 kilometres of arcades, the old town boasts one of the longest covered shopping promenades in Europe. 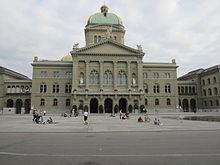 Since the 16th century, the city has had a bear pit (the Bärengraben). The extended and renewed pit off the far end of the Nydeggbrücke actually contains four bears, including two young. During his visit in Bern in 2009, the Russian president and his wife gave two more young bears as a private present.[13] They are actually in Dählhölzli, Bern's zoo.

The Federal Palace (Bundeshaus), built from 1857 to 1902, which houses the national parliament, government and part of the federal administration, can also be visited.

Albert Einstein lived in an apartment at the Kramgasse 49, the site of the Einsteinhaus, from 1903 to 1905, the year in which the Annus Mirabilis Papers were published.

The Rose Garden (Rosengarten), from which a scenic panoramic view of the medieval town centre can be enjoyed, is a well-kept Rosarium on a hill, converted into a park from a former cemetery in 1913.

Bern's most recent sight is the set of fountains in front of the Federal Palace. It was inaugurated on August 1, 2004.

Bern features many heritage sites of national significance.[14] Apart from the entire Old Town and many sites within it, these include the Bärengraben, the Gewerbeschule Bern (1937), the Eidgenössisches Archiv für Denkmalpflege, the Kirchenfeld mansion district (after 1881), the Thunplatzbrunnen, the Federal Mint building, the Federal Archives, the Swiss National Library, the Historical Museum (1894), Alpine Museum, Museum of Communication and Natural History Museum.

The Universal Postal Union is situated in Bern. 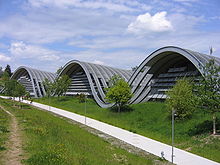 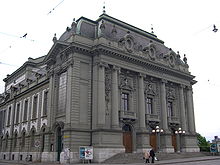 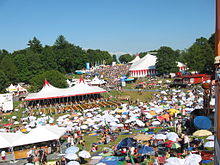 Bern has several dozen cinemas. As is customary in Switzerland, films are generally shown in their original language (e.g., English) with German and French subtitles. Only a small number of screenings are dubbed in German. 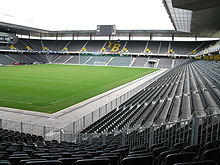 Bern was the site of the 1954 Football (Soccer) World Cup Final, a huge upset for the Hungarian Golden Team, who were beaten 3–2 by West Germany.

The football team BSC Young Boys is based in Bern at the Stade de Suisse Wankdorf, which also was one of the venues for the European football championship 2008.

SC Bern is the major ice hockey team of Bern who plays at the PostFinance Arena.

The PostFinance Arena was the main host of the 2009 IIHF Ice Hockey World Championship, including the opening game and the final of the tournament.

The PostFinance Arena was also the host of the 2011 European Figure Skate Championships.

Bern Cardinals is the baseball and softball team of Bern, which plays at the Allmend

Bern Grizzlies is the American football club in Bern and plays at Sportanlage Schonau.

Bern was a candidate to host the 2010 Winter Olympics, but withdrew its bid in September 2002 after a referendum was passed that showed that the bid was not supported by locals. Those games were eventually awarded to Vancouver, Canada.

RC Bern is the local rugby club (since 1972) and plays at the Allmend. The ladies team has been founded in 1995.

Tram station on the Bahnhofplatz

Bern is well connected to other cities by several motorways (A1, A12, A6).

Public transport works well in Bern, with tram, S-Bahn and bus lines which connect the different parts of the City. Bern Rail Station connects the City to the national and international train network. A funicular railway leads from the Marzili district to the Bundeshaus. This funicular is, with a length of 106 m (348 ft), the second shortest public railway in Europe after the Zagreb Funicular. Several Aare bridges connect the old parts of the city with the newer districts outside of the peninsula.

Bern is served by Bern Airport, located outside the city near the town of Belp. The regional airport, colloquially called Bern-Belp or Belpmoos, is connected to several Swiss and European cities. 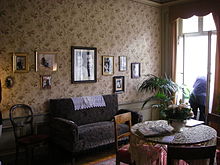