Schwyz (help·info)) is a canton in central Switzerland between the Alps in the south, Lake Lucerne in the east and Lake Zurich in the north, centered around and named after the town of Schwyz.

It is one of the founding cantons of Switzerland; Switzerland's Standard German name, Schweiz, is derived from the name of the canton, and the flag of Switzerland from its coat of arms. For the history of the name, see Schwyz. The Swiss Federal Charter is on display in Schwyz. Northeast of the town of Schwyz is the Einsiedeln Abbey.

In June 2008, Schwyz was the only one of Switzerland's 26 cantons to vote in favor of a failed measure that would have subjected Swiss citizenship applications to a popular vote.

About 1400 years ago, the Allemanni settled in the area of the canton. This influenced agriculture and the way of living of the locals. Christianity only arrived in the area by the late 7th century. There are churches in Tuggen and Schwyz that date back to this time.

In the 10th century the abbey of Einsiedeln became more and more powerful. It soon controlled many of the surrounding lands, many of which are outside the area today covered by the canton of Schwyz. The economy benefited from the transit across the Gotthard, but these profits attracted other powers, such as the Habsburgs.

The rulers of Schwyz, little by little, expanded their area of influence. This included a number of small battles, such as the Alt Zürcherkrieg. In 1386 the canton of Schwyz won the Battle of Sempach and, as a result, greatly expanded its area. The Protestant reformation was resisted in the canton. At the Battle of Kappel in 1531 troops of Schwyz beat those of the reformation leader Huldrych Zwingli. Zwingli himself was the most prominent to die at this battle which killed hundreds of soldiers.

Between 1798 and 1803 the canton of Schwyz was part of the Helvetic Republic. Joseph Thomas Fassbind compiled a history of the canton during this period, published in the 1830s. After 1803 Schwyz regained its independence and most of the changes introduced by Napoleon were reverted. This led to frictions within the canton, leading to the separation of part of the canton. A canton of Schwyz Outer Countries was created in 1830, only to be re-unified with the other half in 1833. In 1845 the canton joined the separatist Roman Catholic league (Sonderbund). The venture of this league failed and the canton re-joined the confederation as an ordinary member. 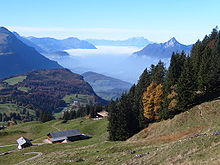 The highest elevation is the Bös Fulen at 2,802 m. Although not as high, the summits of the Rigi massif (Kulm, 1,798 m, and Scheidegg, 1,665 m) are probably the most famous mountains within the borders of the canton. The area of the canton is 908 km². 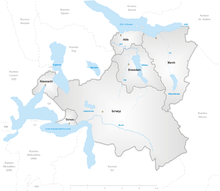 Districts of the Cantons of Schwyz 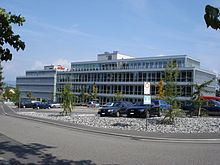 Most of the canton relies on agriculture. The local breed of brown cattle is renowned. The textile industry used to be of great importance in the canton but has now almost ceased to exist; remnants are concentrated around the capital Schwyz. Located in the same area are many producers of fine furniture. There are a few large hydroelectric power plants in the canton.

Tourism is of importance in a number of regions, most notably in the centre of pilgrimage Einsiedeln. Einsiedeln is also a centre of winter sports. The mountain railways on the Rigi are well known around the country. Freienbach, in the north of the canton, is known for the lowest taxes in Switzerland. This has attracted a number of the rich.

The best known, worldwide product of the canton is the Swiss Army Knife manufactured by Victorinox in Ibach just downhill from the main town of Schwyz.