Ohio Stadium is the home of the Ohio State Buckeyes football team and is located on the campus of The Ohio State University[4] in Columbus, Ohio. The stadium was added to the National Register of Historic Places by the National Park Service on March 22, 1974.[5] With a capacity of 102,329, it is the fourth largest football stadium in the United States and the seventh largest non-racing stadium in the world.

Ohio Stadium provided a home to Major League Soccer team Columbus Crew from the league's inception in 1996 until soccer-specific Columbus Crew Stadium opened in 1999. Ohio Stadium is also a concert venue. U2, The Rolling Stones, Pink Floyd & Metallica are among the many acts who have played at Ohio Stadium.

The stadium does not have field lights. When night events do occur, special lighting must be temporarily installed (as in the 2005 game against Texas and the 2006 nationally televised game versus Michigan).

As early as 1913, Ohio Field at High Street and Woodruff Avenue was unable to contain the crowds attracted to many Buckeye home football games. This led to faculty discussion of moving the site elsewhere and building a new facility. The growing popularity of football in Ohio led to the design of a horseshoe-shaped stadium, conceptualized and designed by architect Howard Dwight Smith in 1918. A public-subscription Stadium Campaign to fund the project began in October 1920 and raised over $1.1 million in pledges by January 1921, of which $975,001 were actually honored. [6]

The stadium was completed in 1922 by E. H. Latham Company of Columbus, with materials and labor from the Marble Cliff Quarry Co. at a construction cost of $1.34 million and a total cost of $1.49 million. The stadium's original capacity was 66,210. Upon completion, it was the largest poured concrete structure in the world. Many university officials feared that the stadium would never be filled to capacity.[6]

Smith employed numerous revolutionary architectural techniques while building the stadium. At the base is a slurry wall to keep out the waters from the Olentangy River; the stadium sets on the flood plain. Instead of building a large bowl like the previously constructed Yale Bowl, Ohio Stadium was designed to have an upper deck that would hang over part of the lower deck, giving Ohio Stadium its "A", "B", and "C" decks. Instead of employing numerous columns like those at Harvard Stadium, Smith designed double columns that allow for more space between columns. The rotunda at the north end of the stadium, which is now adorned with stained glass murals of the offensive and defensive squads that comprise the Buckeye football team,[7] was designed to look like the dome at the Pantheon in Rome. The rotunda also features yellow flowers on a blue background, which, according to legend, is related to the outcome of the dedication game against the Michigan Wolverines in 1922.[8] 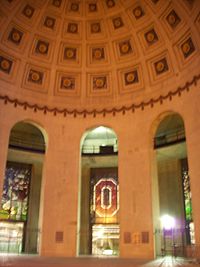 The rotunda at night.

The first game in the stadium was against Ohio Wesleyan University on October 7, 1922, and brought a crowd of around 25,000, which left people concerned because the stadium was half empty. This concern was put to rest at the stadium's formal dedication against Michigan on October 21, which the Wolverines won, 21–0. The crowd was announced at the game to be 72,000, but no one is really sure how many people made it into the stadium. This attendance mark was broken in a game against Michigan in 1925 when 90,411 came out to support the Buckeyes; this is also the last time standing-room-only tickets were sold for a game.[6]

In 1923, a cinder track was built around the football field. The stadium became home to the track and field team for OSU for many years.[6]

As time passed, minor adjustments raised the seating capacity to more than 90,000. In 1984, a new $2.1 million scoreboard was installed. The stadium was heavily renovated from 1999 to 2000. The press box was replaced, additional seating was installed above the existing upper deck, and 81 luxury suites and 2,500 club seats were added. The south end zone scoreboard was also replaced by a 90 ft. x 30 ft. video board that is able to show replays, highlights, animations, graphics and statistical information. Additionally, a smaller version of the south end scoreboard was added to the north end and a new LED ribbon board that runs end-zone to end-zone was added to the balcony prior to the 2009 season. The track and field-specific Jesse Owens Memorial Stadium had been built by the university nearby, thus the track at Ohio Stadium was no longer needed. The track was removed and the field of play was lowered by 14.5 feet to add seating closer to the field. The temporary bleachers in the south end zone were replaced with permanent seating. However, the south end of the stadium remains partially open, thus allowing the stadium to maintain its notable horseshoe configuration.[6]

General improvements were made in the seating and concourse areas. The result of the $194 million renovation was a capacity that rose to 101,568. Eighty percent of the cost of the renovation was funded by the sale of leases on the suites and club seats, with the remaining 20% funded by donations and the sale of naming rights for portions of the stadium. No public or university money was spent in the renovation process.[6]

In 1970, the natural grass field was removed, and AstroTurf was installed, complements of a donation by Lou Fisher in dedication to fellow football player Joseph Campanella. A plaque was placed on the southeast corner in memory of Campanella. In 1979, the surface was replaced with Superturf. In 1990, natural grass made its return to the Horseshoe, a special grass called "Prescription Athletic Turf." New field designs were put in place for the 1992 season and existed through the 2006 season. During that last season problems with the natural grass began to arise. After serious damage to the field during use in the spring of 2006, the field never recovered and had to be resodded. That grass never took root because of bad weather, and the university was forced to resod the field again only three weeks after the old sod was laid. The university spent approximately $150,000 to perform both soddings. OSU replaced the natural grass with FieldTurf for the 2007 season. This new artificial turf looks and feels like real grass but requires minimal upkeep. 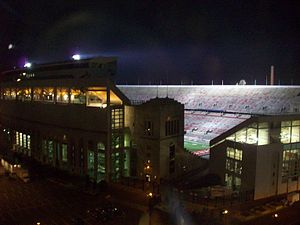 Stadium lights are brought in for night games

Ohio State has ranked in the top five for attendance for many years. Ohio State holds the national spring game record, when they drew 95,722 fans for the 2009 Spring Game, on April 25, 2009. The attendance broke the previous record of 92,138 set by Alabama in their 2007 Spring Game.

The crowd attending these home games is known for creating harsh and difficult environments for opponents. University of Iowa coach Hayden Fry complained after a 1985 loss that the fans were too loud for his quarterback, Chuck Long, to call plays and suggested sound meters be used to gauge the noise level, penalizing home teams if there was too much noise. He said, "It's a realistic fact that happened. He became mentally disturbed for the first time since he's been a starter for us because of his inability to communicate."[15]

Major League Soccer games were held at Ohio Stadium between 1996 and 1999. The home opener was held on April 13, 1996, against D.C. United before 25,266 fans. Brian McBride scored 2 goals and had an assist in a 4–0 rout. The field at Ohio Stadium was the smallest in the MLS, measuring only 62 yards wide by 106 yards long, limited by the track surrounding it.[16] Because of the smaller market for soccer than Ohio State football, B Deck, C Deck, and the South end zone seats were closed, leading to a capacity of 25,243.[17]

Attendance stayed strong through the first season, seeing a record audience of 31,550 September 15, 1996 win over the MetroStars, 2–0.[18] Despite the facility's size, problems like field dimensions and the lack of lighting pushed the Crew to find a new home. Jamey Rootes, Crew president and general manager stated, "We prefer a smaller, more intimate environment (than Ohio Stadium) ... We've got to create a major league environment. Ohio Stadium is a great stadium, but we cannot create a major league environment in a facility that is way too big for us."[19] The Crew finished their tenure at Ohio Stadium 30–18.