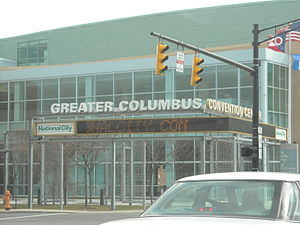 The Greater Columbus Convention Center is a convention center located in downtown Columbus, Ohio, United States, along the east side of High Street. 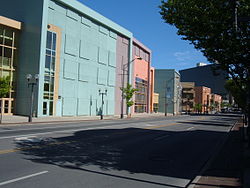 On the morning of January 9, 2008 a major water main break was detected, possibly beneath the building. Officials from the Columbus Division of Fire were concerned that part of the building, including the main hall, might collapse due to structural failure. It was soon determined, however, that the building was not in any danger.[2]

Interior of the facility 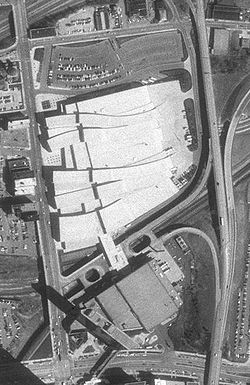 USGS satellite photo of the Greater Columbus Convention Center prior to the 1999-2001 expansion. The expansion occupies the parking lot seen just north of the original building.

While the Columbus Convention Center is considered an outlandish design to many[who?][citation needed][weasel words], the true plan developed by Eisenman was limited by money. Because of this, the original materials and finishes desired were cheapened to fit within the budget of the project. What resulted was a series of interesting geometries with little architectural development.[3]

In an attempt to tame the large volume, Eisenman created a series of separate pavilions on the High Street facade, predictably canted at odd angles. These pavilions were intended to echo the rhythm of the brick facades on the opposite side of the street. The metallic colors originally proposed for the pavilions would have lent greater definition, but the pavilions are nonetheless blank.[3]

These pavilions initiate long, curving volumes which extend back to the truck loading docks along the rear. These volumes were designed to resemble trains in a trainyard from overhead. Along the street facade these volumes coincide with meeting rooms, the grand ballroom, and eating facilities. In the main exhibition space, however, they simply run above the supporting trusses without regard to the structural or spatial grid below.[3]

The general plan of the convention center is quite simple and functional. A major circulation spine runs from the parking lot through the complex to a pedestrian bridge which crosses a series of railroad tracks leading to the Hyatt Regency and shopping areas beyond. Most of the meeting rooms and offices are located on the High Street side of the spine, while the opposite side is dominated by the gargantuan exhibit area. This spine extends up to the roof level, with skylights bringing natural light directly into the interior corridor. Balconies overlooking the space from the meeting room side create a series of intersecting viewpoints. These are further enhanced by the level change in the circulation spine; from the connecting bridge over the railroad tracks where one descends a bank of escalators which slowly reveals the complex spatial nature of this central spine.[3]