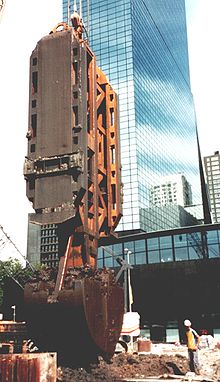 A set of Slurry wall guide walls before excavation

A slurry wall is a technique used to build reinforced-concrete walls in areas of soft earth close to open water or with a high ground water table. This technique is typically used to build diaphragm (water-blocking) walls surrounding tunnels and open cuts, and to lay foundations.

A trench is excavated to create a form for each wall. The trench is kept full of slurry at all times. The slurry prevents the trench from collapsing by providing outward pressure which balances the inward hydraulic forces and prevents water flow into the trench. Reinforcement is then lowered in and the trench is filled with concrete, which displaces the slurry.

Slurry walls are typically constructed by starting with a set of guide walls, typically 1 metre (3.3 ft) deep and 0.5 metre (1.6 ft) thick. The guide walls are constructed on the ground surface to outline the desired slurry trench(es) and guide excavation. Excavation is done using a special clamshell-shaped digger or a hydromill trench cutter. The excavator digs down to design depth, or bedrock, for the first cut. The excavator is then lifted and moved along the trench guide walls to continue the trench with successive cuts as needed. The trench is kept filled with slurry (usually a mixture of bentonite and water) at all times to prevent collapse.

Once a particular length is reached, a reinforcing cage is lowered into the slurry-filled pit and the pit is filled with concrete from the bottom up using tremie pipes. The concrete displaces the bentonite slurry, which is pumped out and recycled.

Slurry walls are built to enclose the desired area, blocking water and softened earth from flowing into it. On completion of concreting, digging within the now concrete wall-enclosed area can proceed. To prevent the concrete wall from collapsing into the newly open area, temporary supports such as tiebacks are installed. When completed, the structure built within the walled-off area supports the wall, so that tiebacks and/or other temporary bracing may be removed.

Slurry wall construction was used to construct the "bathtub" that surrounded most of the World Trade Center site. Slurry walls were also used heavily in Boston's Big Dig tunnel project.