Angle of repose
For the Wallace Stegner novel, see Angle of Repose (novel). For the friction angle between two solid objects, see Friction. For the Sleepytime Gorilla Museum song of the same name, see In Glorious Times.

The angle of repose or, more precisely, the critical angle of repose,[1] of a granular material is the steepest angle of descent or dip of the slope relative to the horizontal plane when material on the slope face is on the verge of sliding. This angle is in the range 0°–90°.

The term has a related usage in mechanics, where it refers to the maximum angle at which an object can rest on an inclined plane without sliding down. This angle is equal to the arctangent of the coefficient of static friction μs between the surfaces.

The angle of repose is sometimes used in the design of equipment for the processing of particulate solids. For example, it may be used to design an appropriate hopper or silo to store the material, or to size a conveyor belt for transporting the material. It can also be used in determining whether or not a slope (of a stockpile, or uncompacted gravel bank, for example) will likely collapse; the talus slope is derived from angle of repose and represents the steepest slope a pile of granular material will take. This angle of repose is also crucial in correctly calculating stability in vessels.

It is also commonly used by mountaineers as a factor in analysing avalanche danger in mountainous areas.

There are numerous methods for measuring angle of repose and each produces slightly different results. Results are also sensitive to the exact methodology of the experimenter. As a result, data from different labs are not always comparable. One method is the triaxial shear test, another is the direct shear test.

If the coefficient of static friction is known of a material, then a good approximation of the angle of repose can be made with the following function. This function is somewhat accurate for piles where individual objects in the pile are minuscule and piled in random order.[2]

Procedure to Measure and Calculate the Angle of Repose 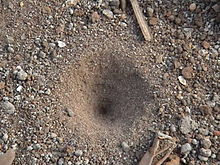 Sand pit trap of the antlion

The larvae of the antlions and the unrelated wormlions Vermileonidae trap small insects such as ants by digging conical pits in loose sand, such that the slope of the walls is effectively at the critical angle of repose for the sand.[3] They achieve this by flinging the loose sand out of the pit and permitting the sand to settle at its critical angle of repose as it falls back. Thus, when a small insect, commonly an ant, blunders into the pit, its weight causes the sand to collapse below it, drawing the victim toward the center where the predator that dug the pit lies in wait under a thin layer of loose sand. The larva assists this process by vigorously flicking sand out from the center of the pit when it detects a disturbance. This undermines the pit walls and causes them to collapse toward the center. The sand that the larva flings also pelts the prey with so much loose, rolling material as to prevent it from getting any foothold on the easier slopes that the initial collapse of the slope has presented. The combined effect is to bring the prey down to within grasp of the larva, which then can inject venom and digestive fluids.

Methods in Determining the Angle of Repose

Tilting Box Method This method is appropriate for fine-grained, non-cohesive materials, with individual particle size less than 10 mm. The material is placed within a box with a transparent side to observe the granular test material. It should initially be level and parallel to the base of the box. The box is slowly tilted at a rate of approximately .3 degrees/second. Tilting is stopped when the material begins to slide in bulk, and the angle of the tilt is measured.

Fixed Funnel Method The material is poured through a funnel to form a cone. The tip of the funnel should be held close to the growing cone and slowly raised as the pile grows, to minimize the impact of falling particles. Stop pouring the material when the pile reaches a predetermined height or the base a predetermined width. Rather than attempt to measure the angle of the resulting cone directly, divide the height by half the width of the base of the cone. The inverse tangent of this ratio is the angle of repose.

Revolving Cylinder Method The material is placed within a cylinder with at least one transparent face. The cylinder is rotated at a fixed speed and the observer watches the material moving within the rotating cylinder. The effect is similar to watching clothes tumble over one another in a slowly rotating clothes dryer. The granular material will assume a certain angle as it flows within the rotating cylinder. This method is recommended for obtaining the dynamic angle of repose, and may vary from the static angle of repose measured by other methods. When describing the angle of repose for a substance, always specify the method used.

Angle of Repose of various materials

Here is a list of various materials and their angle of repose.[4] All measurements are approximated and not exact.

The angle of repose plays a part in several topics of technology and science, including: