Osteopetrosis, literally "stone bone", also known as marble bone disease and Albers-Schonberg disease is an extremely rare inherited disorder whereby the bones harden, becoming denser, in contrast to more prevalent conditions like osteoporosis, in which the bones become less dense and more brittle, or osteomalacia, in which the bones soften.

It can cause osteosclerosis.[1]

Normal bone growth is achieved by a balance between bone formation by osteoblasts and bone resorption (break down of bone matrix) by osteoclasts. In osteopetrosis, the number of osteoclasts may be reduced, normal, or increased. Most importantly, osteoclast dysfunction mediates the pathogenesis of this disease.

The exact mechanism is unknown. However, deficiency of carbonic anhydrase in osteoclasts is noted. The absence of this enzyme causes defective hydrogen ion pumping by osteoclasts and this in turn causes defective bone resorption by osteoclasts, as an acidic environment is needed for dissociation of calcium hydroxyapatite from bone matrix. Hence, bone resorption fails while its formation persists. Excessive bone is formed.[2] 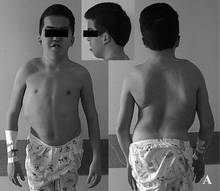 Despite this excess bone formation, people with osteopetrosis tend to have bones that are more brittle than normal. Mild osteopetrosis may cause no symptoms, and present no problems. However, serious forms can result in stunted growth, deformity, increased likelihood of fractures, also patients suffers anemia, recurrent infections and hepatosplenomegaly due to bone expansion leading to bone marrow narrowing and extramedullary hematopoiesis. It can also result in blindness, facial paralysis, and deafness, due to the increased pressure put on the nerves by the extra bone.[3]

There are several forms:

The differential diagnoses include other disorders which can cause diffuse osteosclerosis, such as hypervitaminosis D, and hypoparathyroidism, Paget's disease, diffuse bone metastasis of breast or prostate cancer (which tend to be osteoblastic while most metastases are osteolytic), intoxication with fluoride, lead or beryllium, and hematological disorders such as myelofibrosis, sickle cell disease and leukemia.

The only durable cure for osteopetrosis types affecting the osteoclasts (most types) is bone marrow transplant.[4]

If complications occur in children, patients can be treated with vitamin D. Gamma interferon has also been shown to be effective, and it can be associated to vitamin D. Erythropoetin has been used to treat any associated anemia. Corticosteroids may alleviate both the anemia and stimulate bone resorption. Fractures and osteomyelitis can be treated as usual.