King's Highway 11 is a provincially maintained highway in the Canadian province of Ontario. At 1,780 kilometres (1,110 mi), it is the second longest highway in the province after Highway 17. Highway 11 begins at Highway 400 in Barrie, and arches through northern Ontario, around Lake Superior, to the Ontario–Minnesota border at Rainy River. The road continues as Minnesota State Highway 72 across the Baudette-Rainy River International Bridge. Highway 11 is unique in that it is signed as a north-south route for approximately half its length, and as an east-west route thereafter.

North and west of North Bay, Highway 11 forms part of the Trans-Canada Highway. The highway is also part of MOM's Way between Thunder Bay and Rainy River.

1927 postcard of the Ferguson Highway

Highway 11 was originally planned as a trunk road to connect the communities of Southern Ontario to those of Northern Ontario, as a continuous route from Toronto to North Bay. In 1919, Premier of Ontario Ernest Charles Drury created the Department of Public Highways, though much of the responsibility for establishing the route, he left to Minister of the new cabinet position, Frank Campbell Biggs. Most of the route linked previously built roads such as Yonge Street, Penetanguishene Road, Middle Crossroad and the Muskoka Road, all early colonization roads in this region.

Further expansion was planned with a new highway from North Bay to Cochrane. Construction began in 1925, including reconstruction of portions of the old Muskoka Road from Severn Bridge which was officially opened on July 2, 1927. When it was opened, it was named the Ferguson Highway, in honour of Premier George Howard Ferguson (Drury's successor). Roads in northern Ontario later came under the Ministry of Transportation and became provincial highways. 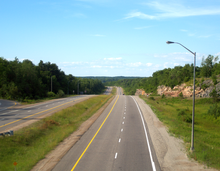 Over the years, Highway 11 grew to stretch from downtown Toronto all the way to the Minnesota border. Highway 11 became synonymous with Yonge Street, the name of the street in Toronto which formed its southernmost segment. It is from this that Yonge Street gained a disputed reputation as the "longest street in the world".

In 1997, the care of the highway portion south of Barrie, including Yonge Street, was transferred by the provincial government to various regional governments as part of significant cost reductions by the Ministry of Transportation of Ontario. This practice is called downloading, in that the financial burden will fall to a lower tier government, in the premise of reducing taxes. Along with the name Yonge Street, the section in York Region is now York Regional Road 1, the section in Simcoe County is now mostly Simcoe County 4. Within the city of Toronto, which does not have a regional road numbering system, it is now known simply as Yonge Street. Highway 11 consequently assumed the 1.1-kilometre highway stub formerly known as Highway 400A, and now ends at the interchange with Highway 400 just north of Barrie's city limits.

In 2003, a major bridge failure at the Sgt. Aubrey Cosens VC Memorial Bridge at the Montreal River in Latchford caused a complete closure and significant detour.

Major reconstruction of Highway 11 south of North Bay has taken place in recent years, upgrading the route from a two-lane rural highway to a four-lane road. In some sections the route is being built as an expressway with right-in/right-out ramps or at-grade intersections, while in others it is being built as a full 400-Series freeway. By the early-2010s, it is expected that all of the highway between Gravenhurst and North Bay will be four lanes. Despite the at-grade intersections, the normal freeway speed of 100 kilometres per hour (62 mph) is posted.

Highway 11 crosses the 45th parallel (halfway between the equator and north pole) 600 metres north of the bridge carrying Highway 118 at interchange 182, just outside of Bracebridge.

Due to a steep incline as it descends Thibeault Hill into North Bay, the southbound Algonquin Avenue segment of Highway 11 features the only runaway truck ramp on Ontario's highway system.[1] The Ministry of Transportation is currently undertaking a study of potential highway improvements in the North Bay area, which may include a new westerly realignment of this segment to bypass the hill.

Highway 11B is the designation for business routes of Highway 11, nine of which have existed over the years. Two continue to exist today, while the remaining seven have been decommissioned. With the exception of the short spur route into Atikokan, all were at one time the primary route of Highway 11 through the communities they served, and were redesignated as 11B after a newer bypass alignment was constructed. 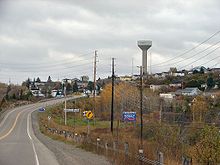 All sections of Highway 11B have now been decommissioned by the province with the exception of the Atikokan route and the southernmost section of the former Tri-Town route between Cobalt and Highway 11.

In 1967, a section of the Cobalt route of Highway 11B collapsed into an abandoned mine, cutting off the town of Cobalt.[2] 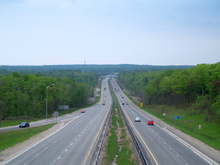 Highway 11 between Barrie and Gravenhurst is currently a rather unusual right-in/right-out (RIRO) expressway (local access permitted, turnarounds via special interchanges), except for a section around Orillia which is a full freeway. Another freeway section does exist in Barrie with the freeway segment from the southern terminus ending at Penetanguishene Road (Simcoe Road 93). The MTO is currently planning on either converting the existing RIRO expressway to a full six-lane freeway, or bypassing it with an entirely new alignment. An environmental and fiscal study concluded that the improvements from Barrie to Gravenhurst will involve the existing route being widened with the exception of a portion south of Gravenhurst that may potentially be constructed to the east of the current road.[3]

North of Gravenhurst to North Bay, the highway is a mixture of freeway sections and at-grade rural expressway (planned to be upgraded to a full freeway) except for one gap that remains a two-lane conventional highway; that section is expected to be widened by 2012.

Note the exit numbers start around 105 – currently the first posted exit number is 130 in Orillia – presumably for continuation from Highway 400.