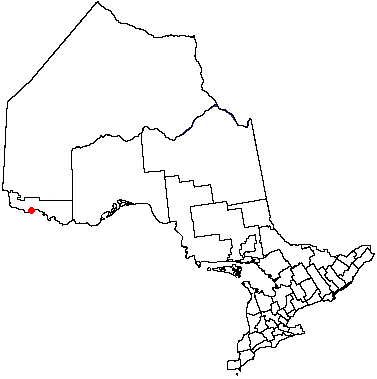 Fort Frances, Ontario is a located in the northwestern part of , . Its population in 2006 was 8,103. It is in the Rainy River District. Fort Frances is a popular destination and hosts the each summer.

Located on the international border with where narrows to become Rainy River, it is connected to by the .

The first European settlement west of Lake Superior, rs known as "voyageurs" including La Vérendrye who in 1732 stopped briefly at before building Fort St Charles on Magnuson Island on the west side of Lake of the Woods. A later HBC fort was established here in 1817 and the subsequent settlement was named after , wife of then Hudson's Bay Company Governor George Simpson, who visited the fort many times.

Over 2,400 residents consider themselves of Ukrainian origin. [http://www.kenboshcoff.ca/articles.asp?id=322]

The town was incorporated in 1903 and held a big centennial celebration in 2003.

The main employer is a pulp and paper mill established in the early 1900s with numerous owners over the years, notably . The mill is now owned by , which employes 700 Fort Frances residents.

The town was struck by the on , , causing major damage to the town. The tornado was a week after the deadly Windsor tornado.

The city features a bull , leaves, a "Magneto", representative of (industry), two men in a , a tree and the motto "Industry and Perseverance."

Another radio station, CKWO FM 92.3, is licensed to the neighbouring .

Fort Frances was the home of the former amateur sports teams:
* (Hockey)
* (Hockey)