The least weasel (Mustela nivalis) is the smallest member of the Mustelidae (as well as the smallest of the Carnivora), native to Eurasia, North America and North Africa, though it has been introduced elsewhere. It is classed as Least Concern by the IUCN, due to its wide distribution and presumably large population.[1] Despite its small size, the least weasel is a fierce hunter, capable of killing a rabbit 5-10 times its own weight.[2]

Within the genus Mustela, the least weasel is a relatively unspecialised form, as evidenced by its pedomorphic skull, which occurs even in large subspecies.[3] Its direct ancestor was Mustela praenivalis, which lived in Europe during the Middle Pleistocene and Villafranchian. M. praenivalis itself was probably preceded by M. pliocaenica of the Pliocene. The modern species probably arose during the Late Pleistocene.[4] The least weasel is the product of a process begun 5-7 million years ago, when northern forests were replaced by open grassland, thus prompting an explosive evolution of small, burrowing rodents. The weasel's ancestors were larger than the current form, and underwent a reduction in size to exploit the new food source. The least weasel thrived during the Ice Age, as its small size and long body allowed it to easily operate beneath snow, as well as hunt in burrows. It probably crossed to North America through the Bering land bridge 200,000 years ago.[5]

The least weasel has a high geographic variation, a fact which has historically led to numerous disagreements among biologists studying its systematics. Least weasel subspecies are divided into 3 categories:[6]

Skeleton, as illustrated in Lydekker's The New Natural History 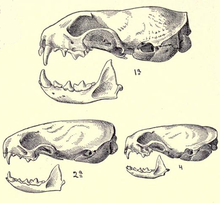 Skulls of a long-tailed weasel (top), a stoat (bottom left) and least weasel (bottom right), as illustrated in Merriam's Synopsis of the Weasels of North America

The least weasel has a thin, greatly elongated and extremely flexible body with a small, yet elongated, blunt muzzled head which is no thicker than the neck. The eyes are large, bulging and dark coloured. The legs and tail are relatively short, the latter constituting less than half its body length. The feet are armed with sharp, dark claws, and the soles are heavily haired.[15] The skull, especially that of the small rixosa group, has an infantile appearance when compared with that of other members of the genus Mustela (in particular, the stoat and kolonok). This is expressed in the relatively large size of the cranium and shortened facial region.[16] The skull is, overall, similar to that of the stoat, but smaller, though the skulls of large male weasels tend to overlap in size with those of small female stoats.[17] It usually has 4 pairs of nipples, but these are only visible in females. The baculum is short (16–20 mm), with a thick, straight shaft. Fat is deposited along the spine, kidneys, gut mesentries and around the limbs. The least weasel has muscular anal glands under the tail, which measure 7 x 5 mm, and contain sulphurous volatiles, including thietanes and dithiacyclopentanes. The smell and chemical composition of these chemicals are distinct from those of the stoat.[17] The least weasel moves by jumping, the distance between the tracks of the fore and hind limbs being 18–35 cm.[18]

Dimensions vary geographically, to an extent rarely found among other mammals. Least weasels of the vulgaris group, for example, may outweigh the smaller races by almost four times. In some large subspecies, the male may be 1.5 times longer than the female. Variations in tail length are also variable, constituting from 13-30% of the length of the body. Average body length in males is 130–260 mm, while females average 114–204 mm. The tail measures 12–87 mm in males and 17–60 mm in females. Males weigh 36-250 grams, while females weigh 29.5-117 grams.[19]

The winter fur is dense, but short and closely fitting. In northern subspecies, the fur is soft and silky, but coarse in southern forms. The summer fur is very short, sparser and rougher. The upper parts in the summer fur are dark, but vary geographically from dark-tawny or dark-chocolate to light pale tawny or sandy. The lower parts, including the lower jaw and inner sides of the legs are white. The dividing line between the dark upper and light lower parts is straight, but sometimes forms an irregular line. In winter, the fur is pure white, and only exhibits black hairs in rare circumstances.[16]

The least weasel mates in April–July, with a 34-37 day gestation period. In the northern hemisphere, the average litter size consists of 6 kits, which reach sexual maturity in 3–4 months. Males may mate during their first year of life, though this is usually unsuccessful. They are fecund in February–October, though the early stages of spermatogenesis do occur throughout the winter months. Anestrus in females lasts from September-February.[20]

The female raises its kits alone, which are 1.5-4.5 grams in weight when born. Newborn kits are born pink, naked, blind and deaf, but gain a white coat of downy fur at the age of 4 days. At 10 days, the margin between the dark upper parts and light under parts becomes visible. The milk teeth erupt at 2–3 weeks of age, at which point they are weaned, though lactation can last 12 weeks. The eyes and ears open at 3–4 weeks of age, and by 8 weeks, killing behaviour is developed. The family breaks up after 9–12 weeks.[20] 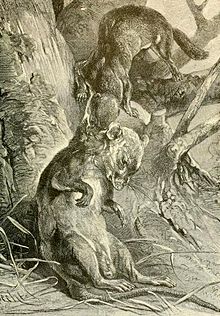 Least weasel killing an adult brown rat, as illustrated in Brehm's Animals of the world. Such incidences however are rare, as the brown rat's aggressive nature allows it to effectively deter weasels from attacking it.[21] 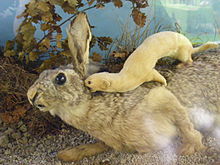 Least weasel attacking a European hare, as exhibited in the Natural History Museum of Genoa

The least weasel has four basic vocalisations; a guttural hiss emitted when alarmed, which is interspersed with short screaming barks and shrieks when provoked. When defensive, it emits a shrill wail or squeal. During encounters between males and females or between a mother and kits, the least weasel emits a high-pitched trilling. The species' way of expressing aggression is similar to that of the stoat. Dominant weasels exhibit lunges and shrieks during aggressive encounters, while subdominant weasels will emit submissive squeals.[22]

The least weasel feeds predominantly on mouse-like rodents, including mice, hamsters, gerbils and others. It usually does not attack adult hamsters and rats. Frogs, fish, small birds and bird eggs are rarely eaten. It can deal with adult pikas and gerbils, but usually cannot overcome brown rats and sousliks. Exceptional cases are known of least weasels killing prey far larger than themselves, such as capercaillie, hazel hen and hares.[24] Rabbits are commonly taken, but are usually young specimens. Rabbits become an important food source during the spring, when small rodents are scarce and rabbit kits plentiful. Male least weasels take a higher proportion of rabbits than females, as well as an overall greater variety of prey. This is linked to the fact that being larger, and having vaster territorial ranges than females, males have more opportunities to hunt a greater diversity of prey.[25] The least weasel forages undercover, to avoid foxes and birds of prey. It is adapted for pursuing its prey down tunnels, though it may also bolt prey from their burrows and kill it in the open.[25] It kills small prey, such as voles, with a bite to the occipital region of the skull[24] or the neck, dislocating the cervical vertebrae. Large prey typically dies of blood loss or shock.[25] When food is abundant, only a small portion of the prey is eaten, usually the brain. The average daily food intake is 35 grams, which is equivalent to 30-35% of its body weight.[24]

The least weasel has a circumboreal, Holarctic distribution, encompassing much of Europe and North Africa, Asia and northern North America, though it has been introduced in New Zealand, Malta, Crete, the Azore Islands and also Sao Tome off west Africa. It is found throughout Europe and on many islands, including the Azores, Britain (but not Ireland), and all major Mediterranean islands. It also occurs on Honshu and Hokkaido islands in Japan and on Kunashir, Iturup, and Sakhalin Islands in Russia.[1] 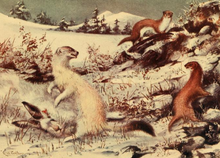 Least weasels driven from a mountain hare carcass by a stoat, as illustrated in Barrett-Hamilton's A History of British Mammals

The least weasel is small enough to be preyed upon by a range of other predators.[26] Least weasel remains have been found in the excrement of red foxes, sables, steppe and forest polecat, stoats, eagle owls and buzzards.[27] The owls most efficient at capturing least weasels are barn, barred and great horned owls. Other birds of prey threatening to the least weasel include broad-winged and rough-legged buzzards. Some snake species may prey on the least weasel, including the black rat snake and copperhead.[23] Aside from its smaller size, the least weasel is more vulnerable to predation than the stoat because it lacks a black predator deflection mark on the tail.[26]

In areas where the least weasel is sympatric with the stoat, the two species compete with each other for rodent prey. The weasel manages to avoid overly competing with the stoat by living in more upland areas, and preying on smaller prey and being capable of entering smaller holes. The least weasel actively avoids encounters with stoats, though female weasels are less likely to stop foraging in the presence of stoats, likely because their smaller size allows them to quickly escape in holes.[28]

Helminths known to infest weasels include the trematode Alaria, the nematodes Capillaria, Filaroides and Trichinella and the cestode Taenia. Least weasels are commonly infected with Skrjabingylus nasicola, which burrows into their skulls and causes fits.[26]

In folklore and mythology 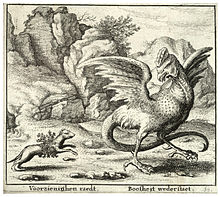 17th century print of a weasel confronting a basilisk

The Ancient Macedonians believed that to see a weasel was a good omen. In some districts of Macedon, women who suffered from headaches after having washed their heads in water drawn overnight would set the problem down to the fact that a weasel had previously used the water as a mirror, but they would refrain from mentioning the animal's name, for fear that it would destroy their clothes. Similarly, a popular superstition in southern Greece had it that the weasel had previously been a bride, who was transformed into a bitter animal which would destroy the wedding dresses of other brides out of jealousy.[29] According to Pliny the Elder, the weasel is the only animal capable of killing the basilisk;

To this dreadful monster the effluvium of the weasel is fatal, a thing that has been tried with success, for kings have often desired to see its body when killed; so true is it that it has pleased Nature that there should be nothing without its antidote. The animal is thrown into the hole of the basilisk, which is easily known from the soil around it being infected. The weasel destroys the basilisk by its odour, but dies itself in this struggle of nature against its own self.[30]

The Chippewa believed that the weasel could kill the dreaded wendigo giant by rushing up its anus.[31] In Inuit mythology, the weasel is credited with both great wisdom and courage, and whenever a mythical Inuit hero wished to accomplish a valorous task, he would generally change himself into a weasel.[32] According to Matthew Hopkins, a witch hunter general during the English Civil War, weasels were the familiars of witches.[33]